Yesterday, the Indianapolis Colts re-signed Andrew Luck to a record-breaking contract worth $139 million, with $87 million in guaranteed money. While he is doing the money dance with his lucrative contract, some things need to be brought to the forefront for the richest quarterback in the NFL.

It comes as no secret that Mr. Luck may be the least criticized quarterback in all of football. It's a little mind-blowing that he has skated so much in his career thus far playing one of the most criticized position in sports. Is it because he is the successor to Peyton Manning? Is it because he is an alumnus of the Stanford Cardinal? Is it because he sports an Abraham Lincoln-like neck beard? Whatever the mystery is, the lack of accountability and critiquing isn’t fair. The criticism is subdued, and to be honest, it’s time for it to end.

When it comes to the aforementioned quarterbacks, we’ve heard just about everything negative you can think of when talking about them, but the same can't be said for Luck. Now that he is the highest-paid player in the NFL, the criticism that was nonexistent should be alive and well going forward. 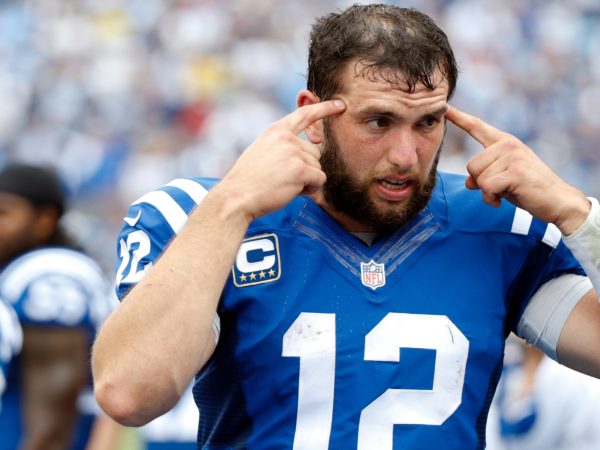 After coming off his worst statistical season (15 TDs, 12 INTs), you would think that Luck’s stock would take a hit, but quarterbacks are overpaid and cherished more than any other players in the NFL. Quarterbacks will be paid no matter what the circumstances are. Signal-callers such as Jay Cutler, Brock Osweiler and Alex Smith make money beyond their talent levels, but it’s not their fault — it’s just the way it’s set up to be. In Luck’s case, the numbers on the contract aren’t the problem. No, it’s the lack of scrutiny he's faced while being anointed as a the game's next great quarterback without having the résumé to show for it.

The expectations of a No. 1 draft pick are one thing, but when you get the title of the highest-paid player in the NFL, the expectations amplify to a level that only superhuman players can live up to. Through four years, Luck has shown flashes of that, but recently he’s been the lesser version of the player who was selected No.1 out of Stanford in large part due to his turnover woes. In his career, he has 55 interceptions in 55 starts in the regular season. I'm not a math expert, but that averages out to one interception per game.

With a stat like that on top of having a career passing percentage of 58.1, one would think it would warrant a greater microscope for the soon-to-be fifth-year quarterback, but it doesn't. The interceptions are alarming enough to make Brett Favre cringe, and he’s been a victim to some injuries due to his punishing style of running the ball.

So far, there has been one great season mixed with decent seasons. After the 2014 season, it appeared that he was becoming a hybrid version of Rodgers and Manning. But he followed that up with his worst season as a pro. In all fairness, he was injured, but he showed flashes of being Shane Falco and Jack "Cap" Rooney of movie fame before injury struck.

For those who swear by No. 12, this isn’t an anti-Andrew post. This a moment of truth for him. Let's face it, it’s just time for him to be treated like all of the other top-flight quarterbacks in the NFL. In his defense, he’s never had a running back gain more than 100 yards in a game while under center, and he hasn’t had the likes of Reggie Wayne and Marvin Harrison lining up on the outside in their respective primes. For long stretches of his career, he’s thrown to so-so skill position players to go with an offensive line that would have trouble stopping Becky “The Icebox” O’Shea from "Little Giants."

And yes, he’s had aging talent a la Wayne, Andre Johnson and Frank Gore. Despite those big names, elite talent hasn’t been assembled for the bearded wonder.

While said talent is still not there, let’s not throw a sympathy party here. He has T.Y. Hilton as a 1,000-yard wide receiver, speed demon Phillip Dorsett, and the steady running back who's climbing up Hall of Fame rankings in Mr. Gore. It's up to Luck to take his team to a new level and show that he deserves to be put on the pedestal he's been placed since coming into the NFL. Over the years, it has been seen with Brady and more recently with Newton in Carolina, so there is a possibility that Luck can reach those lofty heights. Now as the highest-paid player in the NFL, all eyes are on the high-priced quarterback. If the Colts don’t make any noise in the improved AFC South, he may finally hear the criticism that's mostly alluded him thus far.

We scold Jay Cutler for being a turnover machine, but Luck is just as bad as he is. We attack Matt Ryan for not being a franchise quarterback, but some may argue that Luck hasn’t been consistent enough to show that he is either. Should we be this relenting when it comes to dealing with Luck?

His salary is head and shoulders above the rest, but will his play match the level of his pay? That remains to be seen.

The pressure for him to play at an MVP level should be expected on a yearly basis, and the excuses of the past should no longer loom. 2016 will be an important year for him: It could propel him to be one of the great quarterbacks in the game, or it can place him into odd space where talented but mediocre quarterbacks roam. If he plays like the Luck of 2014, then the skeptics will remain mute. But if he continues to be a turnover machine going forward and shows signs of inconsistency, the critics should hold up a mirror so he can face the truth that he’s been eluding for the past few years.

One Reply to “After His Big Payday, It's Time To Stop Pacifying Andrew Luck”