It was another electric night in Tiger Stadium. LSU had a young quarterback under center, but there was no need to worry about scoring when the Tigers had this running back. A young back who had all the tools — he could truck right over a defensive player, then suddenly zoom past for 20-, 30- and 40+-yard gains. There he goes again — gain of 44 yards. Before you knew it, he was off into the distance again, with power folks drool over a running back — gain of 58 yards. He finished the game with three touchdowns.

No, I’m not talking about Leonard Fournette and his 2015 LSU Tigers. Actually, I’m referring to a former LSU running back some may have forgotten. I could never forget because I went to high school with him, and he was one of the most talented running backs I laid my little ol’ brown eyes upon at the time. He was part of the reason I started watching football heavily. I’ll never forget watching this guy rack up 321 yards in one game. Watching him was as if you put Jerome Bettis in his prime up against some malnourished, unprepared college linemen — so unfair. The player: Alley Broussard.

Broussard was a freshman when LSU beat Oklahoma in the BCS National Championship game 21-14 on January 4, 2004. The next season, he accomplished something no other running back in LSU history has accomplished. As the rest of the country argues about Fournette in this “to sit or not to sit” saga, Broussard and those who remember those days are pondering something different. Will Fournette break Broussard’s single-game rushing record of 250 yards?

He’s gotten dangerously close. Fournette’s rushing numbers have increased game to game, including his most recent stat line of 244 rushing yards and two touchdowns against Syracuse. With 631 yards and eight touchdowns in three games, Fournette shows no signs of slowing down. I spoke with Broussard to get his thoughts on his standing record, Fournette’s talent and his future.

Broussard explained that he didn’t even know he set the record until an equipment manager approached him after the game and told him. On how it feels to have that esteem, he gushed, “It’s a huge honor … so many running backs have come through LSU, and I just so happen to have the most yards in a game. I feel blessed to be a part of it.”

Although there have been talks on whether or not Les Miles should rest Fournette against Eastern Michigan, Broussard thinks that Fournette could absolutely surpass 250 yards Saturday.

“He’s a hard runner, and he makes it look so easy on the field … It can definitely be the Eastern Michigan game,” he said.

Although, right after stating that, Broussard showcased his SEC pride by joking that he personally won’t accept his own record to be broken unless it comes against an SEC foe.

I asked him to put his coaching shoes on for a moment to dictate what he would do if he were Miles.

He explained, "I'll let [Fournette] get about 10-12 carries and let the other backs showcase their talents just so I can have an idea how the younger backs can relate to game situations."

Conversely — and not surprisingly — he says that if he were Fournette, he would want to play the entire game. As far as the sitting out an entire year "dilemma," Broussard replied, "I don't believe in sitting out just to play in the NFL. You can get hurt any day, any place or any time. I'd rather take my chances on the field now."

The former back said that he has not had a chance to reach out and talk to Fournette yet. He did add that "it seems like he knows what it takes to win and get the job done. LSU has a great staff and always did a fantastic job on preparing the players."

Time will only tell if and when Fournette does reach this feat. I'm positive he and the coaches aren't even worried about it, as they are focused on continuing to win, especially in the ever-tough SEC. One thing is certain: This kid is crazy good, and this is only the beginning of the talent we'll see from him. 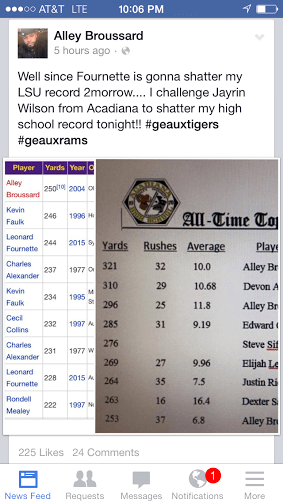 i write about sports and stuff. Sports radio co-host. Work in pro sports. My opinions are not an endorsement of my employer. Don't fine Marshawn Lynch.