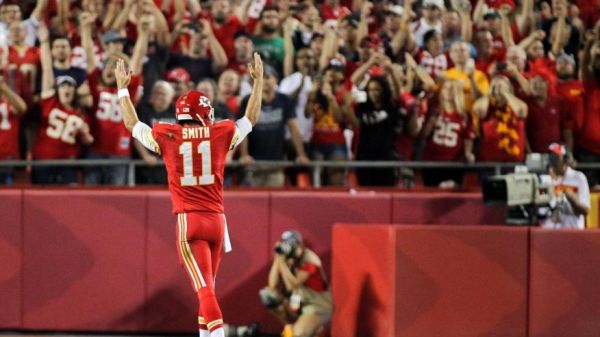 I never thought this day would ever exist. Most of us figured when the San Francisco 49ers of Santa Clara decided to permanently sever ties with Alex Smith, it would be the end of a disappointing career and another in the long line of top overall picks whose names get remember when it's time to make fun of failure.

But that was before 2012. That was before we needed a second hand to hold the best cellphones — a simpler time. A time when we doubted the undoubtedly best basketball player in the world's championship psyche, so surely a flop like Alex Smith would never have that mental fortitude, right? I mean, how can he hold it together with such small hands?

On Sunday, Alex Smith will return the 49ers' home stadium as starting quarterback for the Kansas City Chiefs. He, if anything, has shown a resilience some wished translated into a better early part of his career. But one thing he has done, which is just as difficult but not so uncommon, is shed the "bust" label.

Sports franchises have shown since their inception that if a player is disposable, they will dispose of him. Sometimes, they allow long-tenured superstars or fan favorites to flicker and fade out. But if a player can be replaced, chances are he will be replaced. And if the replaced player is deemed not good, he will remain unsigned. For whatever reason, the Chiefs picked up Alex Smith, the bust. Younger, "better" quarterbacks were available, yet he's their starter with a nice-sized contract. Not bad for a bust.

More importantly, Alex Smith — through the good and not as good — has been on the field since 2005. That means his career is nearly a decade long in a sport in which the average player is on a roster for a third of that time. It's easy to continue to say Smith is a bust, but it's more accurate to give him a label below (above?) that one: underachiever.

Our society wants to function in a this or that, black and white form of thinking. We want to place every comparison in one of the two end zones and eschew the rest of the field. Somewhere between overachiever and bust lies Alex Smith, nine-year veteran and co-author of three straight winning seasons as a starting quarterback. While we marvel at what could have been after every Aaron Rodgers touchdown celebration, we can cordially applaud Alex Smith for turning a trash heap of a career into … something better than a trash heap. I know it seems strange to grasp, but remember this: Kwame Brown played basketball until he was 30. Also recall the quarterbacks drafted after Smith, who are not in the league right now.

Cheers to you, Mr. Smith. I wish you more success — just not Sunday against the San Francisco 49ers of Santa Clara.

Related: Colin Kaepernick Cashes Out, Everyone Loses Their Damn Minds

2 Replies to “On Alex Smith And Shedding The Bust Label”