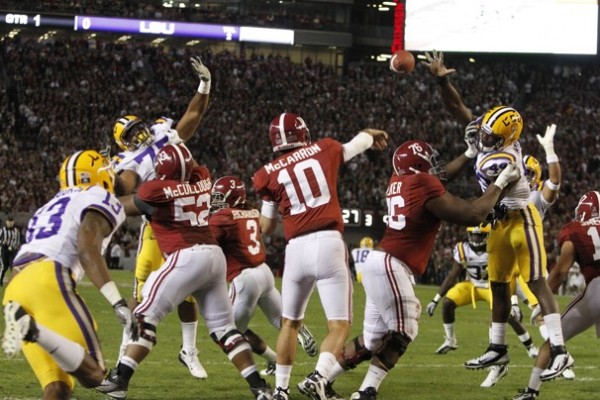 The Game of the Century 3.0 is almost here, and for the first time in a year, there’s a legitimate argument that these aren’t actually the two best teams in the nation anymore. This is LSU’s last shot at revenge, perhaps the college football world’s last shot at seeing the crystal football truly up for grabs. Outside of Baton Rouge, Oregon’s rolling with the nation’s most potent offense and a top 25-ranked defense to back it up. LSU’s lost some luster in the offseason with the loss of Tyrann Mathieu, but the defense is full of enough stars to make some magic happen under the lights in Death Valley on Saturday.

While much is made of the loss of the Honey Badger, Tiger fans will probably tell you Reuben Randle left the biggest void on the team. Even with the addition of Zach Mettenberger, the offense is on pace to finish well behind last year’s stats in terms of passing. Coaches have struggled to let the passing game feed off of their four-headed rushing attack. Unfortunately for the Bayou Bengals, that will be their best shot at knocking off the top-ranked Tide, due to some inconsistency from the pass rush and allowing the occasional big play that comes with such an aggressive defense.

What a lot of people didn’t realize about LSU last year is that their depth on defense and at running back was enough to carry them deep into the BCS conversation. Tyrann Mathieu and the rest of the defense’s scoring ability, however, made it possible for close games to become blowouts in minutes. That’s what made them elite. With the right play-calling, a great game from LSU and some big plays on defense, LSU could shake up the BCS in a major way. Vegas has the Tide as a nine-point favorite, but I think that’s selling the Tigers short.

I’m not necessarily downing Nick Saban and Alabama. Of course not. I’m just more sold on kids like Keke Mingo, Sam Montgomery, Eric Reid, Tharold Simon, and Kevin Minter than I am of AJ McCarron. Amari Cooper, Kevin Norwood and Kenny Bell are talented, but young. This may be the best secondary they’ve faced as a unit, which will be seen even more, should the Tigers slow down the Tide rushing game in the least bit. If LSU’s bloody, but unbowed offensive line can create a consistent pocket for Mettenberger, we could be looking at utter chaos come Sunday morning.

*Sidenote: Its incredible that you can actually find the entire 2012 National Championship game on Youtube. By far, one of the most boring games of all-time. However, the highlights are bearable. Enjoy.