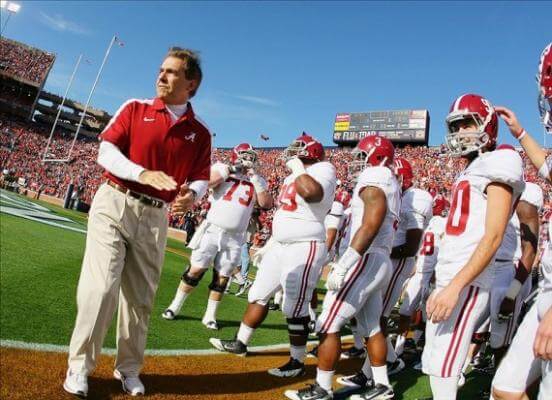 I don’t personally have anything bad to say about the state of Alabama because every time I Roll through, the Tide shows me nothing but love. (See what I did there?)

Alabama had a fierce run of glory under the great Paul Bear Bryant, but after the great one stepped down the formidable powerhouse crumbled like Enron stock until the arrival of the great Nick Saban.

Like him or not, Saban is a winner and his track record is as good as it gets when it comes to college football. He has delivered since taking over the program, bringing in two national championships and one conference championship.

This year the Crimson Tide will have hurdles to overcome. In back-to-back seasons, they have lost a Heisman finalist at running back and a host of first- and second-round defensive players to the NFL.

The Good: Alabama rolls into the 2012 campaign ranked consistently in the top 5 in about every preseason poll there is. It is no secret that the Tide loves to run the ball, and even though Alabama may have lost a Heisman finalist again last year, don’t expect any letdowns in the backfield. Eddie Lacy and Jalston Fowler showed they can more than handle the workload when Trent Richardson was injured briefly last season.

These runners will only go as far as the offensive line will let them. Alabama’s greatest strength is that it will be returning four of the five starters at offensive line this season. That has to have opposing teams a little worried since last year was the first time this group had played together and it delivered with a dominating display of run blocking that led to the national championship.

The Bad: Alabama and Nick Saban make their living with a strong running game and a solid defense. Well this year the defense will be talented, but they have lost a lot of great players to the NFL out of their front seven. Expect their front seven to be made up of a ton of sophomores with little experience paired up with a few seniors who are returning to improve their position in this year's NFL draft.

Linebacker will be the biggest concern for the Tide. It’s hard to lose two guys as good as Dont'a Hightower and Courtney Upshaw and expect your team to not skip a beat early. Even as talented and as deep as the Crimson Tide are.

The Ugly: The quarterback situation at Alabama is a problem. A.J. McCarron will probably get the starting nod, but he will be protected as much as possible which really eliminates the pool of wide receivers that the Tide have on their roster. Sad thing is that after McCarron the shelf is bare. The Tide are one ankle sprain away from disaster.

That's too bad because it just seems like the Tide keep loading up with four-star wide receivers. Every year they get talent at the position, but the production just doesn’t seem to be what you would expect from them. I am not sure who to blame, the quarterbacks for not delivering or the wide receivers for not getting open.

They might want to get the quarterback situation under control as they open up the season facing the Michigan Wolverines.

The Prediciton: The Tide will find a way to overcome their shortcomings, but a national championship is probably out of the realm of possibility. The defense will not be as strong as in years past so the offense will be expected to do more. As of right now, I am not so sure they can. Time will tell.