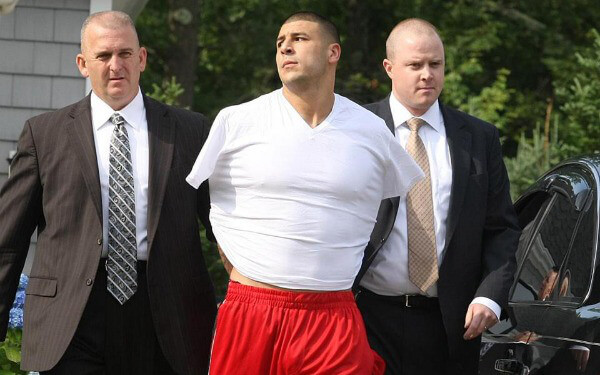 For me, the strangest part about finding out another side to an athlete you follow is the part where you go back and scour through interview clips and read articles looking for clues that make sense after the fact, to layer in the additional context that comes with new information.

In the past couple weeks, the Aaron Hernandez story has developed and evolved, first linking the former Patriot to the murder of Odin Lloyd not as the main suspect, then to something entirely different when it was reported that he had destroyed his home surveillance system and handed his cell phone over to the authorities in pieces. Even then, without the knowledge of all the information at hand, there was a belief that it would be an obstruction of justice charge, which is still a pretty serious charge in a murder case but not the worst thing in this terrible scenario.

And so, we spent a week learning more about Hernandez's potential history of violent run-ins at nightclubs and the wrong crowds he hung out with. Even though it was still a shock when the news came down that he was being charged for first-degree murder last Monday, it stopped short of being surprising. We all had enough pieces to the puzzle to understand the path that led Hernandez to this moment where he allegedly took someone else's life.

Of course, the story only got more complicated as the week went on, as we started learning that Hernandez might have been involved in a double murder case that was unsolved from June 2012. At that point, it just became hard to understand anything.

But perhaps that's the point in all this.

(Before I go on, I want to link to this New York Times article on how Odin Lloyd and Aaron Hernandez's paths crossed. As Bomani Jones mentioned several times on Twitter this week, we went days diving in to the Hernandez case without stopping to at least understand the victim's past. Anytime a legal case involves a high-profile athlete, that's where the attention turns, but I want to make sure that we don't lose sight of the fact that this isn't sports; it's real life. A life was lost, and many other lives will be impacted it. It should be more than a side note, so this is the least I can do as I continue to write about this.)

When the Patriots signed Hernandez to a five-year, $40 million extension last August, there was a lot of talk about how appreciative the organization was of Hernandez' behavior and willingness to adjust and change since joining the team. In this ESPN piece, Hernandez appeared at a Patriots charity gala and spoke about the extension: "It's just, like I said, it's surreal. Probably when I'm done with this conversation I'll get some tears in my eyes. But it's real, and it's an honor."

Pats owner Robert Kraft went on to detail an exchange he had with Hernandez after the extension was signed: "Aaron came into my office, a little teary-eyed, and presented me with a check for $50,000 to go to Myra Kraft Giving Back Fund. I said, 'Aaron, you don't have to do this; you've already got your contract.' And he said, 'No, it makes me feel good, and I want to do it.'"

Of course, once you layer in the additional context, if the allegations are true, this extension happened two months after Hernandez was in the middle of a double murder. And if his involvement in that incident was true, then it makes me wonder how he really felt, in his own conscience, about the extension, about his success and whether the guilt drove him to make this charitable gesture. Or perhaps it wasn't that complicated. Maybe it was just part of putting on a facade, or his agent suggested it or even he really did want to give back to the Patriots for the trust they placed in him. 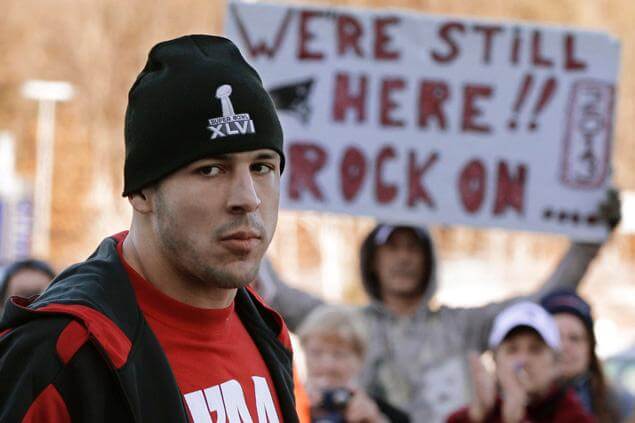 It's hard to try and understand someone whom you know so little about. I'm not breaking new ground here by suggesting that much of what we know about athletes is oftentimes manufactured, carefully packaged and delivered to us through the guise of public relations. Perhaps we're inundated with so much of this — commercials, carefully staged interviews, postgame press conferences that reveal very little, halftime profiles that reveal even less — that when we read a long-form profile or get a glimpse into a player's personal life, we start to think that we know these athletes. Then things happen — Kobe Bryant gets himself involved in a sexual assault case, Michael Vick is investigated for dog fighting, Tiger Woods, Jovan Belcher, and so on and so on — and suddenly we learn so much more that you realize we knew nothing before.

And then you realize that even with all of this new information, you still know nothing.

Towards the end of my hour of scouring the Internet for clues that we should have seen this coming somehow, I came upon this video appearance of Hernandez on Extra TV with Maria Menounos from just two months ago.

In the interview, Hernandez talks about the upcoming Patriots season, and they discuss how he is a role model to many people in the Hispanic community. In that moment, Hernandez might have already been hiding a personal secret of the 2012 double murder, but even he couldn't have predicted his alleged actions just two months later, on that fateful night when Odin Lloyd lost his life in what is described as an "orchestrated execution."

No one knew. No one knows. Not Bill Belichick. Not Robert Kraft. Not me. Not you. And for a time, not even Aaron Hernandez.

It's difficult to understand or put a linear path to how a man ends up murdering another. It's also near impossible to ever think that we know anything about our athletes. I think I've realized this before, but this time, it's the final reminder for me that when you're a sports fan, much of what you follow and spend time on is entertainment. And that's all it really is.