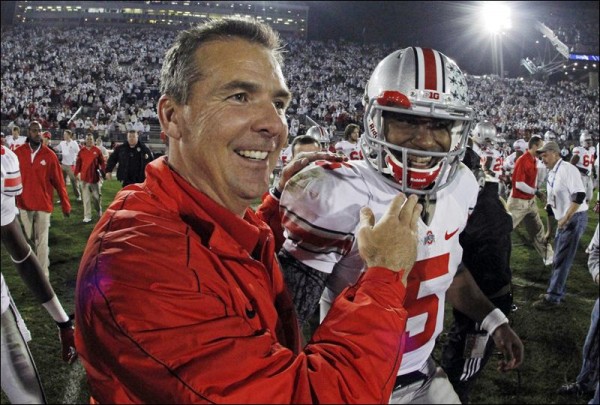 By Dr. Jeffrey A. Glenn / @jagadelic

Buckeye fans like myself knew that we were in for a strange ride this year. Due to sanctions resulting from the meta-foolish behavior regarding tattoos and memorabilia a couple of years ago, the Ohio State Buckeyes are ineligible to play for the Big Ten Title or a bowl game of any sort. (Yes, even the Poinsettia Bowl.)

Well, that's no big deal. We're coming off a 6-7 season, and it's Urban Meyer's first year. He can take 2012 to get himself and the team together, red shirt his best recruits, and come out with guns blazing for 2013. 8-4 or 9-3 would be an acceptable showing — a preview of coming attractions if you will.

Give the 2012 squad credit for not following the script. Despite the fans' support coming down from off-the-charts insane to just wildly enthusiastic, the young men in Scarlet and Gray have run up a 10-0 record. Victories at Wisconsin and home against Michigan would give Ohio State its first undefeated regular season since 2006 and its first undefeated season overall since 2002.

Now I'll be the first to admit that the non-conference schedule was nothing but doormats and tomato cans. The conference schedule has not proven to be much better as the Big Ten is having one of its worst seasons in its storied history. Everything seems to be off in the Big Ten this fall. Even the "Girls of the Big Ten" Playboy spread was not up to its usual standards (or so I'm told).

I don't know how the Purdue Boilermakers let us beat them in overtime after they outplayed us for 59 minutes and 15 seconds. Nebraska is the conference's highest ranked team eligible for bowl play at #16. That's hard to believe after I personally watched our squad light the Cornhuskers up for 63 at homecoming. We allowed Indiana to score 49 points on us, but the ineptitude was mutual and we put up 52 for the win. Indiana football and 49 points just don't go together.

However, 10-0 is 10-0. It's nothing to be sneezed at. Braxton Miller's sophomore year has been phenomenal. The Donovan McNabb comparisons have already started, and he has clearly outplayed that Shoetree fellow up North. I am referring, of course, to Denard Robinson, the glorified scatback at Michigan. I may have gotten the nickname wrong; perhaps it's Shoehorn or Shoeblue. Hey, you can't expect a Buckeye post to run without taking a shot at the boys in Malaise and Blue, I mean Maize and Blue.

I always considered the '95 season to be the most frustrating of my lifetime. We clearly had the best talent in the country behind Eddie George, Terry Glenn, Orlando Pace, Antoine Winfield, Ricky Dudley, Shawn Springs, etc. But we stumbled in Ann Arbor in what's known to Buckeye fans as the Biakabatuka game. If you ever want to have fun with a longtime Buckeye fan, just say, "Biakabatuka" and watch him crumble like Superman being hit with a double dose of Kryptonite.

However, if we close out these last two opponents and finish 12-0 with no place to go, it will be equally as vexing. The only thing worse than coming up just short is earning a place at the table and being disqualified from going for it all. Are my Buckeyes as good as Alabama, Notre Dame, Oregon and Kansas State? In all honesty, I would have to say no. But stranger things have happened, and I'm sure my boys would love to give it a shot.

Shakespeare was right. "Tis better to have loved and lost, than to never have loved at all."

11 Replies to “A Shakespearian Tragedy: The 2012 Ohio State Buckeyes”