I know, I know. We as a football nation are only days away from Week 4 of the 2015-16 NFL season, and I am already jumping ship. Mission: ABORT. Yes, I too, like the rest of ‘MERICA,’ wait impatiently and full of angst during the summer months for the return of the sweet sound of grunting, hard tackles and helmet contact that is probably resulting in concussions — *swoon.* I endure the not-so-par play of hopeful third-stringers in preseason. I check the blogs for reports on training camp action more than I check my own email. And then — the season begins [cue: sad trumpet].

Growing up in certain areas of the country breeds a natural predisposition to an obsession with football. Southern Louisiana is one of those areas. I could challenge you to go to Baton Rouge or New Orleans and find a business not donning purple and gold or black and gold, respectively. It is a way of life. And yet, for me, when the season starts, the disappointment begins to set in. All of the improvements that the teams appeared to make and the incredible season the pundits claimed they would have are nowhere to be found. I realize I’m being brash, but hear me out on why I’m jumping seasons so soon.

Brief success will spoil you. Fast.

The New Orleans Saints organization has historically been terrible, but the events of the past decade definitely have the fan base spoiled. Can you blame anyone? If you go from driving a ’97 Ford to a brand-new Mercedes-Benz, going back to the Ford would be a more than humbling experience. After 26 grueling losing seasons in the 39 years prior to the Sean Payton era, the new success was a breath of fresh air. Payton, of course, did something the great Jim “Playoffs” Mora couldn’t do, leading the Saints to — and winning — their very first Super Bowl.

Granted, the team has only had two losing seasons post-Super Bowl: one 7-9 finish in the Bounty year that we will not speak of and another 7-9 season this past year. The realist in me, however, remembers glaring weaknesses from the past few “good” seasons that are still contributing to issues on the current team. For example, the team was dead last in the league in defense (yards allowed) in that 2012 season. Add a new defensive coordinator and a sprinkle of voodoo, and the very next year they jumped to the fourth-best defense in the league. So just how does a defense with virtually the same players go from fourth to 31st in one season? Apparently, the coaches don’t know either. They haven’t addressed many issues, including the offensive line, which brings me to my next point …

The near future is looking less than favorable for Who Dat Nation. No one — besides, maybe, Falcons fans — wants to think of a future sans Drew Christopher Brees. When the offense is in sync, the Saints are an absolute joy to watch, not to mention the joy that Brees has brought to so many fantasy football teams in the past. Alas, here we are: recovering from a Luke McCown start this past weekend. (I’ll get into the curse Verizon put on the Saints later.) Since joining the Saints, Brees had yet to miss a regular-season game due to injury prior to this past weekend. Needless to say, Louisiana residents are breathing into paper bags as we speak — which may or may not be needed to wear on their heads in a few weeks.

With 44,295 passing yards and counting accumulated as a Saint and numerous records surpassed and set, Brees has truly been a gem. A franchise quarterback is hard to come by. The train-up-a-child method was nixed when McCown was chosen over Ryan Griffin, as the more experienced McCown served as the better option should Brees go down. Knowing the difficulty in finding another franchise QB, who wants to think about a Saints team without Brees? Certainly not me.

Don’t expect non-corny jokes from a team named the Pelicans. Aside from the corny jokes though, the future in the arena that plays neighbor to the Superdome does indeed look bright. In fact …

Yes, it’s that serious. Unfortunately, the two professional sports teams in the city cannot sync up their winning seasons. That means that even though Nola may be a strictly football town, it is time to support the basketball team. Not in that “go team go” casual fan sort of way, but the same die-hard way in which everyone supports the Saints. The local and national billboards, commercials and sponsor ads with Brees’ face all over them will start to slowly be replaced with images of young Davis. I do not need to preach all of his accolades to you, but at 22, Anthony Davis has already been compared to greats like Tim Duncan and Hakeem Olajuwon. Contrary to original popular belief, Davis is already one of the best players in the NBA. And guys, he’s 253 lbs., up from his lean 220-lb. stature in the 2012 draft. Oh, and there’s also this.

If that doesn’t pump you up, then I don’t know what will. To be clear, I’m not abandoning ship on football yet. It’s just hard to stay enthusiastic and optimistic when you see the same issues year to year. I’ll just watch from a distance so that it nor fantasy football can hurt me, then pour my passion into 82 NBA games. 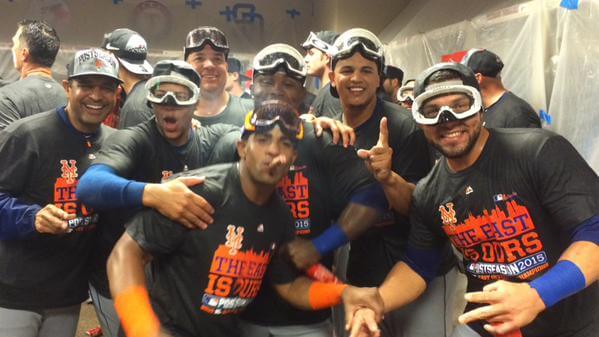 Baseball It’s Still Not Real – The Mets Win the…
0