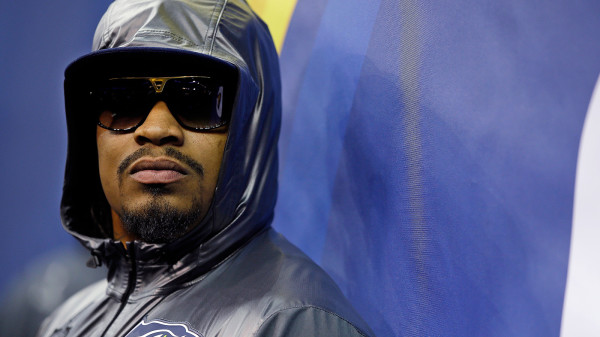 [Feast thine eyes on the very first installment of "The 400 Chronicles." As a homage to the great fans of the Washington Wizards who sit in the 400 section of the Verizon Center, this is for you. We paid $10 for tickets and had the time of our lives talking about sports, alcohol, life and everything in between.]

He's a kid from Oakland who found his way to the NFL, hit a few speed bumps but largely inverted the perception of him league-wide. Aside from being one of the toughest sons of bitches with pads on and the inspiration behind an all-time great video, Lynch has always been the subject of captivating interviews. There's his chat with Deion Sanders on the days leading to this year's Super Bowl. And the holy grail of Marshawn Lynch interviews came with last year's brilliant ESPN E:60 profile.

If he's comfortable, he'll allow us for a brief glimpse of his life. If he's not, f*ck off.

For VICE Sports, Marshawn obviously felt at ease. The near four-minute clip isn't even about football. It's about grills: the kind one puts in his or her mouth. The kind Birdman copped off Cedric The Entertainer in the "#1 Stunna" video. The kind Marshawn has played with lodged in during games for years now. A sound investment? Maybe, maybe not, but monitoring another man's bank account when mine resembles the walking personification of "you're a writer in your 20s waiting on your day job's payday just so you can be broke again" has never been high on my list of priorities. Plus, Marshawn's history with the oral investment has nothing to do with the luxury of an NFL contract. It's a cultural commodity, if nothing else. That and seeing his life flash before his eyes at a Jack-In-The-Box.

There's a candid honesty in Lynch's affection. As jovial here as he's been on camera away from the gridiron, maybe ever, finding enjoyment in the controversial running back's excitement isn't difficult. Because, again, Marshawn's being Marshawn. He's not hurting anyone. He's not disrespecting anyone. And if anyone's offended, please believe he's more concentrated on being a 28-year-old running back attempting to land a new contract at an age when a the position's value tends to start its decline. He wasn't going to give much of a shit anyway.

More importantly, though, who wouldn't play with a "BEAST MODE" grill in given the opportunity? You'd be a fool not to.