It is amazing what a national championship and an influx of coaching talent can do for the perception of a conference. The Big 10 was an afterthought a few years ago, but it will be closely watched in 2015, thanks in large part to defending champion Ohio State and Jim Harbaugh retaining to his alma mater. We rank each division of the Big 10 below. 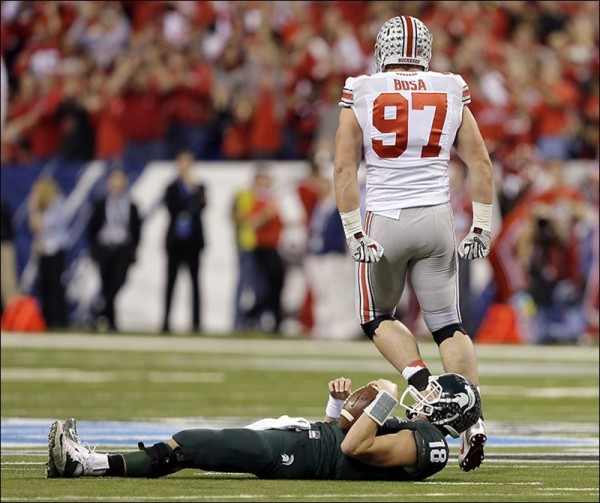 The Buckeyes are the clear favorites to win the Big 10 and defend their national championship from 2014. Repeating is never easy, but Urban Meyer’s squad is talented in all the right places, and the experience from last season should carry this team into one of the four College Football Playoff spots.

Led by running back Ezekiel Elliott, a quarterback competition other schools envy and an experienced offensive line on offense, Ohio State will score a lot of points. Add in a defense led by Joey Bosa, maybe the best defensive player in college football, and it is easy to see why the Buckeyes are the No. 1 ranked team in the nation in nearly every preseason poll.

Their neighbors in Ann Arbor received all the headlines this offseason by bringing in Jim Harbaugh to coach at Michigan, but the Spartans remain the best team in the state. Mark Dantonio teams always play solid defense, and quarterback Connor Cook is an underrated passer with a huge upside. The team has 24 seniors returning to go along with a quarterback entering his third season at the helm. The offensive and defensive lines should be strengths of the team.

There is clear separation between Ohio State and everyone else in the conference, but if Michigan State can find play-makers at wide receiver and rebuild the secondary, it could be a team that pushes the Buckeyes this season.

Jim Harbaugh is a weird guy, but his coaching ability cannot be put into question. The former Michigan quarterback returns home to rebuild a once-storied program after successful stints at Stanford and then in the NFL with the San Francisco 49ers. Schematically, the offense should look the same under Harbaugh, but expect the execution to be raised.

The defense is there to keep Michigan in games, so it’ll be up to that offense to improve from last season in order for Michigan to take the first step toward rebuilding itself into a Big 10 contender. It won’t happen this year, but momentum inside the program is high and eight wins is needed for the Wolverines to carry that over into recruiting and the 2016 season.

The Nittany Lions got off to a hot start in 2014, but eventually, the lack of depth, leadership and experience caught up with the team in James Franklin’s first season as head coach. A bowl win over Boston College was a momentum-builder for the program, however. Quarterback Christian Hackenberg needs to take care of the football better as a junior, but some of that will come down to if the offensive line can be solidified and if Franklin can find skill-position players to offer help.

Defensively, Penn State should be better this season, and after losing only two games by more than a touchdown in 2014, another year of experience should help the Nittany Lions in those situations.

Head coach Kevin Wilson needs to reach a bowl game in 2015, or his job security becomes a major question mark. Wilson is improving the program, but eventually the Hoosiers need to take that next step in year five of his tenure.

For that to happen, Indiana must find a way to replace the production of running back Tevin Coleman. There are question marks on both sides of the ball, but the return of quarterback Nate Sudfeld from injury offers some optimism.

It is a year of change for Randy Edsall’s team. Maryland must replace 11 starters, including its quarterback in 2015. The Terps won’t enter the season with a ton of expectations, but a relatively easy out-of-conference schedule could put them in position to become bowl-eligible if a few games fall right in conference play.

Only two defensive starters return, but the biggest question mark on that side of the ball is how the program transitions into a 4-3 style under a new defensive coordinator.

The Scarlet Knights were placed in a brutal division when arriving into the Big 10 from the Big East last year, and 2015 should be another tough road. A bowl berth would mean a successful season, but expecting anything more than that is unfair to Kyle Flood’s team. The defense will struggle, so it’ll be up to the offense to keep Rutgers competitive this season.

Paul Chryst takes over the Wisconsin program, but expect the Badgers to once again compete for a division crown. Chryst is no stranger to the style of Badger football, as he led the offense as a coordinator during some of the glory years. However, he no longer has running back Melvin Gordon to carry the workload, and Wisconsin isn’t known for explosive plays in the passing game. Quarterback Joel Stave has experience, but he can’t be the focal point of the offense.

The team will once again rely on a strong offensive line, and the Badgers always seem to have capable running backs on the roster. If the offense can match last year’s production, the defense is good enough to win a relatively weak West Division.

Mike Riley will prove to be exactly what Nebraska football needed to return to the national stage. It may not happen right away, but the former Oregon State coach will eventually provide Cornhusker fans with the style of football and culture the program was once known for during the glory years. Quarterback Tommy Armstrong Jr. needs to get better from the pocket in the new pro-style offense, but he is still a threat with his legs.

It isn’t that Bo Pelini didn’t have success at Nebraska — he had only lost 27 games in nine seasons — but he wasn’t a culture fit. Riley will be, and if given some time to change some things on and off the field, Nebraska fans will be rewarded in a division that is winnable each season.

After Wisconsin and Nebraska, the West Division gets ugly. Minnesota may be the third best team in the division, which should show you how lopsided the divisions in the Big 10 are right now.

Jerry Kill is a head coach who is easy to root for and has led the Gophers to a near .500 record in his four seasons as a head coach. Minnesota plays hard and the defense is good, but Kill has yet to figure out how to get the Gophers to produce enough explosive plays to take the next step.

Not too long ago, head coach Pat Fitzgerald was putting Northwestern football on the map for the first time, and his name was mentioned in big-time coaching searches. Two straight seasons without a bowl berth has dampened the momentum of Fitzgerald and the Wildcats, but 15 starters return to this year’s team. If the offense can put up points, it isn’t out of the question that Northwestern, rather than Minnesota, is the third best team in the division and makes a return to bowl season.

The Hawkeys are an interesting program. Head coach Kirk Ferentz has led Iowa to two Big 10 titles and 12 bowl games in 14 seasons at the helm, but it still isn’t a program that gets a ton of respect. That won’t change in 2015. Greg Davis is still the offensive coordinator, so don’t expect much excitement from that side of the ball. And the defense isn’t much better.

The return of former Oklahoma State transfer Wes Lunt may improve the offense, but Illinois and head coach Tim Beckman will still struggle to find footing in the Big 10. The Fighting Illini simply aren’t very good, and that won’t change this season.

At least the program’s nickname is about beer. Purdue fans will need all the alcohol they can get to watch the 2015 season.

A former newspaper man, Mike Craven is the publisher of BirdsUp.com of the Rivals.com network. His work can also be found in Dave Campbell's Texas Football Magazine and in the Texas FNF Magazine.

One Reply to “Does Any Team Have A Chance To Compete With Ohio State For The Big 10 Crown?”