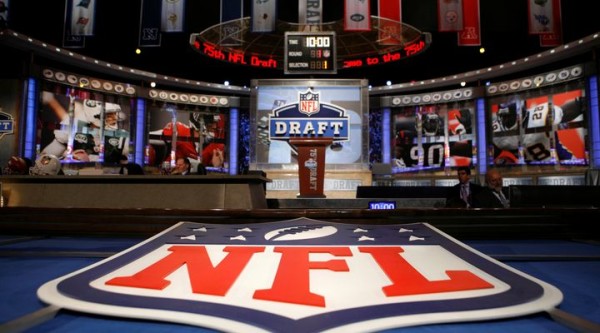 The NFL owns the United States of America because of people like me. I love the game, the Philadelphia Eagles, the offseason and especially the draft. It begins tonight with the first of several days of the 2014 NFL Draft, the culmination of months of preparation — not only for teams and players, but fans. During the season, the diehard evaluates the team.

Crap, our safeties are garbage. Ha Ha Clinton-Dix looks legit. We need him. Man, we could use a cornerback. Darqueze Dennard can hit and cover. Beast name, too. I hope he’s there when we pick ...

When the year ends, free agency and trades dictate where your team sits. My team cut ties with a Pro Bowl wide receiver. Immediately, the position becomes top priority.

Man, look at Lee ... he’s smooth and knows the pro route tree. He can step in from day one and make things happen. I nearly forgot this guy would have been a top 10 pick last year if eligible! No man, no country for Benjamin. He busted in his workout day, and there are still too many questions. He’s too raw, a project. We don’t need projects. We need someone to fill in for our lost Pro Bowl receiver ...

Evaluate the draft chart. Look at the mocks.

The needs of some teams ahead show that Clinton-Dix will likely be gone. Teams need receivers ahead of our 22nd pick — they’ll gobble up the possibilities. Let’s look to cornerback. Kyle Fuller impresses everyone. We need that guy. He can do it all and will only get better. His upside? Dude, let me tell you about his upside. Unparalleled upside. So much freaking upside. We could use him from jump street, and he’d instantly make an impact. Can you imagine?

No, Fuller won’t be there. Time to look at receivers again. Lee is the definite pick. Chip Kelly got torched by him at Oregon, loves the guy. Lee will be an ideal fit. We have to have Lee ...

A feature story about a particular player comes out.

Now, we’re back to the former Oregon State star’s boat. Look at all the catches and yards. He can turn on a dime. He would bring a dimension we need since our Pro Bowl receiver left. He even compares to that former guy! Must have! Wait. Is that a YouTube clip of Beckham? My goodness, look at the toughness he shows when blocking. His special teams ability simply puts him above the others without a doubt. It would be a colossal mistake if we let him go.

What about our defense?

Well, we can pluck a late-round defensive lineman who can eat blocks. The pass rushers aren’t strong in this draft. Maybe there’s an under-the-radar guy out there. Corners can be plucked late and produce. Look at Brandon Boykin. He’s a perfect example! We have to get a receiver. I still don’t want Benjamin, man. Please, draft anyone but Benjamin ...

There are months of digested information with back-and-forth arguments in my mind. Therein lays the rub. When the player is picked, all of it goes out the cotton-picking window.

When the Eagles select Benjamin, he’s the real deal, an athletic specimen that can’t be denied success in the league. I mean, when have you ever seen a guy that tall who can jump like that? It’s simply unbelievable this guy was available after that trade down when Cooks and Lee were on the board — who wanted them anyway? They’ll prove to be busts, for sure ...

Then, the realization sets in that your team has acquired a new foundational piece.

Benjamin is our guy. Look at him in that draft cap answering questions in the next day’s press conference. Chip loves his measurables and immeasurables! How could he not? Listen as the former Seminole talks about how much he loves Kelly’s offense. There is absolutely no chance he was coached or is making this stuff up. He’s sincere! He’s wearing green!

Time to hit Twitter and rejoice with my brethren.

When can I order my Benjamin jersey? Please lord, tell me. I have my credit card in hand, and it’s not quite maxed out.

This is the insanity. My fellow diehards share a bit of it as well. It consumes and it eats until the only thing left of your mind is the mush that makes you live and die with a team in the first place.

The NFL is a 24/7, 365-day-per-year obsession for the insane fans, more so than any other sport. The hype, content and publicity only make it worse. Wait, one of my several voices chirps in again.

Man, we should've drafted a cornerback.

At least I’m not one of those truly demented sickos who gets excited about offensive linemen. See, it could be worse! Who's to say I have a problem?