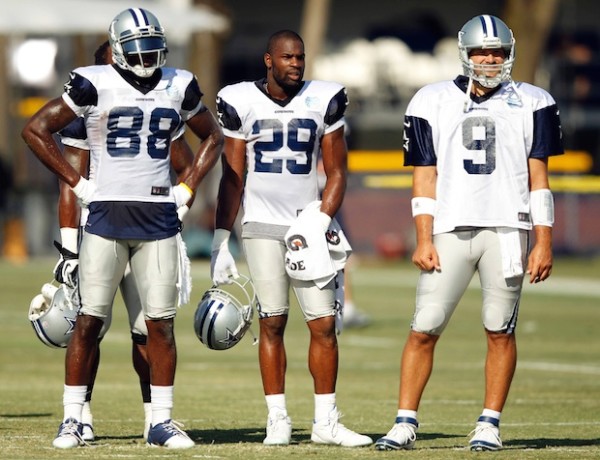 Descending upon Oxnard, California, this week is the biggest circus in the world by any other name: Dallas Cowboys training camp. Current players, prospective players, coaches, media and untold droves of fans will make the trek to the unofficial onion capital of California, an hour northwest of Los Angeles.

Jean-Jacques Taylor of ESPN Dallas will carefully check his tweets (so very NSFW), and Ed Werder will remain on standby for the duration of camp. He will not eat, nor will he sleep, for the duration of training camp. Delivering every last scrap of information about the Dallas Cowboys is what sustains him.

That last part really pisses off the crowd that thinks the TV is a one-way stream of information for ESPN when games aren't on. In other fans' minds, thinking that success and failure are binary in the NFL, the Cowboys haven't done sheeeeeeeit since Jimmy Johnson went fishing for good and don’t deserve the attention. Ratings, which ESPN is after, aren’t always about merit. Also, Jimmy Johnson's hair is a national treasure. We should all thank him for sharing it with us once a week during football season.

Anyway, in this circus that isn’t, everyone has his part, his role to play.

The ringleader of it all, of course, is Jerry Jones, whose real name is Jerral Wayne Jones. He's an oil man who struck it rich, and he lives accordingly.

Jerry Jones lives with his ass out because he likes the breeze. He's always visible in his booth, he's always up for a sideline visit, winning or losing, and he'll be all over this training camp, probably in a t-shirt tucked into his silver-and-blue shorts clapping up and down the sidelines.

Some will point fingers and say that he's just trying to get in front of the camera, but that's only half of it. Jerry Jones wants you to know that this team is his — through success or failure, his hands crafted these Cowboys. Letting a general manager run his team doesn't make any sense to Jerry Jones. He and this team are inseparable. It is him and he is it, until he dies or has it taken from him. That would be worse than death.

He's coming off a huge contract extension and his second back surgery in the last year. This season is the ultimate put-up-or-shut-up season for Romo, who has led the Cowboys to a whopping one playoff win in eight seasons as a starter. Stats and touchdown-to-interception ratios are no longer important, even though those are the only things he can control. The eyes of NFL fans are focused on him harder than ever, which is hard to believe as he's been the starter of one of the most highly scrutinized jobs in professional sports.

For this season to be a success, he can't lose games late. He's shown the ability to win games late over the years, but it's the losses that have come to define him, as every hot sports take artist will have you know through the primal screams. The common denominator in all this is that he seems to be in close games late pretty frequently. That's not all on Romo, but as the quarterback, both blame and praise will always fall to him.

In one of the rings off to the side, in a dark corner of this silver and blue big top, will be Sean Lee, Mr. Invisible.

Lee tore his ACL in organized team activities in May. He was the best player on one of the worst defenses in the history of the NFL last year. Among the hopefuls to fill his spot is a 25-year-old, already twice-retired from the NFL, Rolando McClain. McClain is a redemption story waiting to happen, but it's a redemption story that should have fallen to Lee, who has been hurt often throughout his short NFL career.

He wants only to play, but his body fails him and he vanishes. This time, it's when the Cowboys needed him more than ever.

In another ring is the world's oldest man, Monte Kiffin.

People will try to tell you that he's only 74, but don't let them fool you. Kiffin invented football defense in its entirety (probably). The only problem is it appears Kiffin hasn't improved on the strategies much since he invented them.

At this point, Kiffin is being pushed along by Rod Marinelli, who has usurped play-calling duties from Kiffin this season. Usually, having one of the worst defenses in the history of the NFL would be reason enough for firing. Many have been fired for much less. But here Kiffin stays, the defensive coordinator who doesn’t call plays, lacking his best defender from last season and functionally riding out the remainder of his contract.

Maybe it’s an act of kindness that’s keeping Jerry Jones from firing him so late in his career. But, at this point, any exit should suit Kiffin fine.

The hemming and hawing surrounding Dallas Cowboys training camp is one of the rites of the sports fan's summer. It means that fall is coming and your Sundays will soon have meaning again.

Sure, the camp is ridiculous and the coverage is way, way beyond anything necessary, but that's the beauty of it. Nobody wants to give you more than Jerry Jones. All the access you could ever want will be delivered to you through the throng of reporters and cameras that will weave themselves into Oxnard in the coming weeks.

Nobody recognizes and monetizes sports-as-entertainment better than Jerry Jones. He knows that Cowboys fans will devour every last note from reporters. He knows that folks who don't like his team, who outnumber the fans greatly, will pay attention if only to speak ill of his team.

You could turn it off. But you know you won’t.