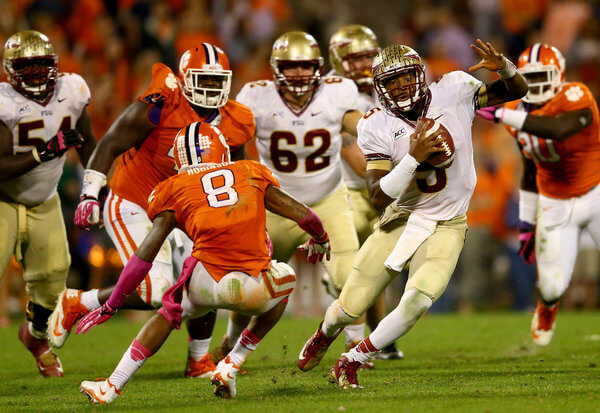 Before the college football season began, everyone was up in arms about who was going to be good enough to beat Florida State on the gridiron. On paper it seemed pretty automatic that Jameis Winston would lead the Seminoles to the national championship once again, especially since the ACC is perceived as weak and not competitive. The average fan may agree with this distinction, but the first couple of games of the season have me wondering if the hangover from last year’s title run hasn’t been too much for the Seminoles to shake off.

Entering Saturday’s contest, the Seminoles will face a tough Clemson team for one half without their signal caller. Winston has been sidelined for an obscene gesture by the Seminoles athletic department, and Clemson should be just fine with that. The Tigers come into town with a 1–1 record and a host of young, talented players. Clemson is that team that you want so badly to believe in, but the Tigers always find a way to make you a non-believer before you get sucked all the way into the hype.

Last year Winston and the Seminoles came into Death Valley and laid the smackdown on the Tigers. It got ugly and fast. Clemson was ranked number 3 in the nation at the time, but the Tigers looked like they were ranked 103 the way the then number 5 Seminoles beat them around in that game.

The difference between last year’s Seminoles and this year’s team is apparent. There isn’t an abundance of points going up on the scoreboard like last year. It seemed as if the Seminoles were scoring touchdowns every possession last season, and when they didn’t score one, a field goal was imminent. This year, they aren’t quite as impressive offensively. In fact, the Tigers are statistically better on offense, but the lackluster defense cost them a game early in the season.

Winston started the season last year just slinging touchdowns while rarely if ever throwing interceptions. This year, he only has three touchdowns to his credit but has already thrown two interceptions.

Clemson has to be looking for redemption after the 51-14 beatdown they took last year. You have to respect the FSU athletic department heads for benching Winston for a big game like this. They could have designated an easier game to implement the suspension, but they made a good decision and a decision that could benefit their team down the road. Sophomore Sean Maguire will step in at the helm and get some pretty important game experience for the Seminoles. I expect a lot of running to take place in the first half and a few play-action passes to keep the defense honest.

Florida State has the luxury to lean on a power running game spearheaded by Karlos Williams and Mario Pender. It will be paramount that the running game can get off to a good start early in the game. The defense will also need to be on top of its game. The Seminoles have to make sure that they can hold things together while Winston is riding the pine. It’s probably going to take him a few possessions to catch up to the speed of the game so Clemson better try and figure out that FSU defense early and often. If not, it could get ugly by the fourth quarter. Make a believer out of us, Clemson, or at least give us a game for the ages.

2 Replies to “Here's Why Clemson Vs. Florida State Will Be College Football's Game of the Week”