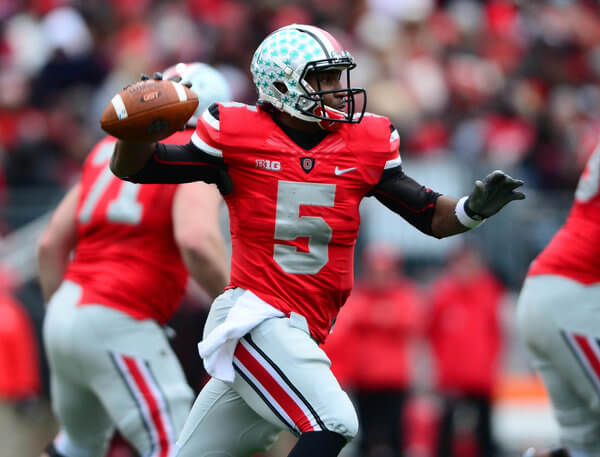 As a longtime Buckeye, I've seen the fans of our boys in Columbus get ridiculously amped up for football season. The '75 team had Heisman Trophy winning Archie Griffin returning and the '95 team with Eddie George, Terry Glenn and Orlando Pace stirred everyone's hearts. The '06 team was #1 wire to wire from preseason until Troy Smith walked off with the Heisman. (Of course, I must disclose that the season ended with Urban Meyer's Florida Gators blowing the doors off of our squad 41-14 in the National Championship Game.)

However, none of that compares to what's going on in Columbus now. I have heard several conversations comparing the Buckeyes with Alabama and debating how the game will go. Is Alabama on the schedule? No. These folks already have bypassed the season and are discussing how the National Championship Game will go. Child of Grace!

But I can hardly blame the Bucknuts. Last year was such a tease. Having to go on probation while watching the team go undefeated was cruel and unusual punishment. Remember when you were in high school and had just got to second base with your girlfriend and you heard her mom's car pull into the garage? Well, this year is like that next date when the parents are out of town. We're expecting to go all the way, baby!

Is it really feasible? Certainly. The schedule is favorable. I'd call our non-conference opponents tomato cans, but that would be an insult to tomato cans sitting on grocery shelves all over the country. The Big Ten is coming off its worst season since 1971, and our toughest games against Wisconsin and Michigan are both at our house.

The offense should really be something to see. Quarterback Braxton Miller is on everyone's short list to win the Heisman. If he can improve on last year's 15 TD passes, 13 TD runs and 1,271 yards rushing, it's a wrap. Carlos Hyde and his 16 TD runs are coming back along with our two top receivers, Devin Smith and Corey Brown. The offensive line is ranked in the top 5 in the country as well. Urban's spread option offense is ready to run like a well-oiled machine.

Of course, it won't be as easy as all that. Going undefeated is always tough and requires a good bit of luck. Half of the Buckeyes' wins last year were by seven points or less. The defense was less than stellar, and believe me, less than stellar is the most generous thing I could think of to say about a squad that gave up 49 points to Indiana. That defense was bad, and this year's will be inexperienced as eight starters are gone, including the entire front seven. All I can say about the defense is that it's one big question mark.

I know this is unthinkable for Buckeye fans, but the most dangerous game on the schedule might be the night game on October 5 at Northwestern. Yes, Northwestern. They are coming off a 10-win season and a bowl victory. Ohio State will be coming off what should be a tough fight against Wisconsin. The Wildcats will be excited about getting the chance to play such a high-profile game, and if the Buckeyes take them for granted, it will be a long night.

Urban Meyer has already had to deal with some discipline issues. Carlos Hyde has been suspended for the first three games, and our best defensive player, nationally rated cover man Bradley Roby, must miss the first game along with two top recruits. Hopefully, Mr. Meyer has nipped this in the bud and sent a a message that the team will heed from now on.

This will be one of those seasons to remember, for better or for worse. The shackles have been removed, and expectations are sky high. Nothing short of hoisting the National Championship Trophy will be considered a success. It will take some luck and hard work, but it looks like the Buckeyes are ready to give it their best shot.

8 Replies to “The 2013 Ohio State Buckeyes: Probation Is Over And Columbus Is Ready To Celebrate”