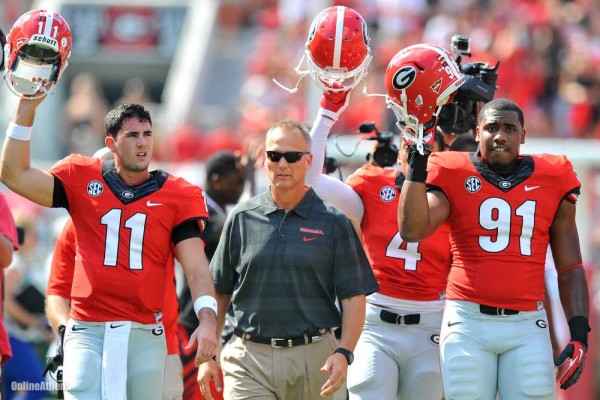 Trying to summarize the events behind the national perception of the University of Georgia Bulldogs, post-2008 preseason No. 1 ranking, is daunting, quite frankly.

There’s far too many recruiting battles, injuries, dismissals and flat-out bad luck to wade through. If I had to illustrate it using music, I’d have to go with Otis Redding’s "Sitting on the Dock of the Bay."

“Looks like nothing’s gonna change … everything still remains the same. I can’t do what 10 people tell me to do … so I guess I’ll remain the same.”

After the injury-derailed disaster of a season that was 2008, it seemed like the program had plateaued. Everybody and their mamas chipped in their two cents on what the program should do. Despite an increasingly disappointing defense, deteriorating team strength and lackluster recruiting efforts, Mark Richt hadn’t budged as far as coaching changes. After losing to UCF in the 2010 Liberty Bowl to cap a 6-7 season, his first losing campaign ever, the sky was falling for Dawg fans, and falling fast.

It was all but solidified that the program would never make the leap from good to great.

There’s no question that college football, as morally malignant as it is, elicits passion in the South that only a few professional fan bases (outside of Premier League soccer) can compete with. Many of those are the die-hard fans of lovable losers. The Cleveland Browns’ Dawg Pound and the Black Hole at Raiders’ home games come to mind, for instance.

Over the years, I’ve come to find out how much the process of rooting for a college squad differs from doing so for a pro team. The nonstop soap opera of recruiting and the coaching carousel can be just as stressful as the season itself. It takes a perfect storm of coaching continuity, quality depth, scheduling and minimal attrition to fuel a championship run, and even then, it isn’t promised.

It’s easier to enjoy the season when you spend every Sunday hoping your team will just keep it close, for once. When the bar’s low, anything positive is reason enough to smile. In college, however, there’s no high draft pick to look forward to. Momentum is everything for a college football program.

“Watchin’ the ships roll in, then I watch ‘em roll away again … I’m just sittin' on the dock of the bay, wastin’ time.”

From November 1, 2008, to sometime in September 2012, the Dawgs managed to remain mentioned with elite programs yet didn’t sniff the top 10. Florida, Auburn and Alabama all won national titles within three years of hiring new coaches throughout the second half of Richt’s tenure. Urban Meyer, Gene Chizik, Nick Saban, Les Miles — all of these guys claimed crystal footballs while Richt was left out in the cold. Georgia fans wanted a quick fix, and for the most part, you couldn’t blame them.

The most infuriating position to be in as a fan, by far, is that of the underachiever. Just ask me. Judging by the past decade, my home-state Georgia Bulldogs and Atlanta Falcons fit that description.

There’s so much to be said about the program since it last won a BCS bowl game. Long-overdue coaching changes. Outdated strength and conditioning programs. Inexplicable rashes of injuries. Laughable errors in the recruiting process. For the most part, these things were only noticeable to die-hard UGA fans.

Unfortunately, once the problems were pretty much resolved, the most recent result was arguably one of the most agonizing yet encouraging losses to ever take place on a national stage. You know the story: December 1st, 2012. Georgia vs. Bama. Fourteen seconds and eight yards separated Georgia from all the marbles. C.J. Mosely tipped a pass intended for Malcolm Mitchell into the hands of Chris Conley. Clock runs out. The Bama dynasty lives on.

We’ve lived with the memes for years. “Aaron Murray/Mark Richt can’t win the big one,” “Mark Richt has lost control of his team,” or, “Mark Richt is Ned Flanders in a coaching headset.” Okay, I may have made that last one up, but you get it.

Last weekend’s barn-burning victory over LSU (without the best player in the country, no less) threw Murray’s name into Heisman contention. After the game, many seasoned UGA fans breathed a sigh of relief, and deservedly so. The first month of the schedule was a top-heavy Murderer’s Row. The nine new defensive starters began their careers against veteran dual threats Tajh Boyd and Connor Shaw (led by offensive gurus Chad Morris and Steve Spurrier), then the prototypical pocket passer Zach Mettenberger.

On one hand, we can say with confidence that Georgia won’t face a stretch as intimidating as this for weeks. The downside to this hot start is that the target has been placed squarely on the Bulldogs' back for the rest of the way. Every game has potential to be a letdown, starting this week on Rocky Top.

Georgia has been in this position before. After a 45-16 win over Nick Saban and the defending champion Bayou Bengals in 2004, the Dawgs lost a 19-14 heartbreaker at home to none other than Phillip Fulmer and the Tennessee Vols. It was the first game I can recall shedding real-life, dog-died tears over.

If the Dawgs do slip up on the way back to Atlanta, I won’t be one of the fans calling for Richt’s head. The cupboard is full of offensive and defensive talent, even when Aaron Murray graduates. But for at least two years, this is the best shot we have to celebrate.

The title will be decided at the Rose Bowl in Pasadena this year, some 500 miles away from the 'Frisco Bay Otis sang about 45 years ago. If I was coach Richt, I’d retire on the spot, head to Northern California and take a page out of Mr. Redding’s book.

With all he’s gone through since 2001, could you blame him?