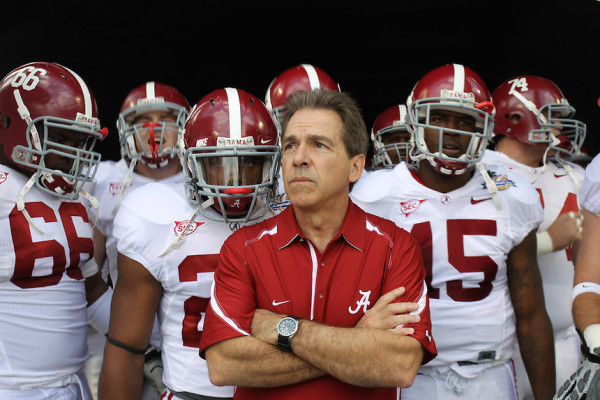 Roll Tide … Does this sound familiar? It should on the premise that every year, Alabama seems to be in the picture as the team to beat or at least present as a legitimate contender for a national championship.

Nick Saban has redefined the college football landscape as he has become the dominant figure of the 21st century in coaching. At the turn of the century, it appeared as if Urban Meyer would be that dude, but Saban has stepped his game all the way up and taken that title by the throat, possibly never looking back.

Things could get interesting this year as the competition gets better and better across the country. The South Eastern Conference (SEC) in its own right has held its own as the most legitimate conference in football the past few years. In fact, we haven’t seen this type of dominance in a conference since the glory days of the Southwest Conference. Many would argue that Alabama is to the SEC what Oklahoma was to the SWC.

The Good: Alabama doesn’t rebuild anymore. It reloads. This season will be no different, but the Tide will not have as many holes to fill as it did before last season. Question marks have been turned into exclamation points for the Tide. The Tide roster is filled with veteran talent. They are led by quarterback A.J. McCarron, who was the biggest question mark on the team last year. All he did was play like a top Heisman candidate all year and lead his team.

The Tide also packs a pair of explosive players in Amari Cooper and T.J. Yeldon. Cooper is in my opinion one of the three best wide receivers in the country. He’s big, he’s fast and he has talent. T.J. Yeldon is a cut above most in the country at the running back position. He’s like Eddie Lacy and Trent Richardson rolled into one. As he gets older and stronger, the rest of the country should be really scared.

Defensively, Adrian Hubbard is the name you need to embed in your cranium. Hubbard is a do-it-all linebacker who can knock you silly and then run you down if you decide you don’t want to run his way and endure the punishment.

The Bad: The Tide is coming off back-to-back championships. Repeating is hard enough, but three-peating is a feat rarely accomplished. Usually when teams have the type of success that the Tide have had over the last two years, injuries start to plague the lineup and what looks like a lock for a title becomes a very trying and difficult season to endure.

The Ugly: Quite frankly, there is none. Alabama is loaded. The biggest concern for the Tide would have to be the cornerback position, but the two safeties that the Tide has should be able to cover up plenty of the mistakes the young corners may make. The opponents facing Alabama should be concerned at how ugly the score could get if they don’t bring their A games. Front sevens are going to feel the wrath as the Tide will bolster a veteran offensive line and a veteran defensive line.

Prediction: The Tide will roll again, and unless an SEC foe steps up and beats them, a national title is on the horizon.