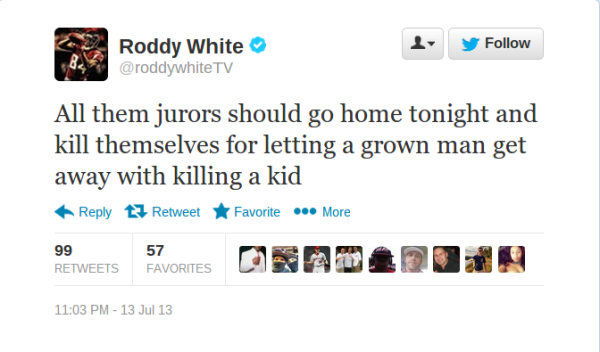 It’s nearing two weeks since the George Zimmerman verdict added the latest page on race relations in American history. Emotions are still smoldering even as the media spotlight has splintered towards other stories alongside the verdict’s aftermath. Yet, most of those emotions are coming from everyday citizens, full-time activists and media pundits.

We’re not seeing much from the sports world at this very moment, however. A major part of that is because the initial reactions were fast, furious and mostly criticized for their unfiltered tones. You’ve seen the tweets, you’ve read the apologetic statements and whether some care to admit it or not, agreed with even the most extreme reactions a la Roddy White. And, let’s not forget Charles Barkley’s ill-received interview on CNBC’s Maria Bartiromo's show, spoken of here in a guest post by Jamar Hudson.

Recently on The Exchange, Ken Fang of venerable sports media sites Fang’s Bites and Awful Announcing joined Sumit Dasgupta and me to discuss those varied responses. As open and deep as the podcast is (listen here), some questions lingered afterwards. They were less about the verdict, Zimmerman or Trayvon Martin, and more about how sports figures discuss these cultural touchstones.

I asked Ron Glover II, Editor-in-Chief of The Starting Five and sports publicity veteran Gail Sideman of PUBLISIDE to answer those extra queries about athletes, anger and future (or stunted?) activism in the wake of the verdict.

TSFJ: The Zimmerman verdict elicited extreme reactions from many perspectives, all with varied degrees of anger about the verdict, the coverage and the reactions of citizens themselves. From our own purviews — as fans and citizens, not just as media participants — is there a problem with seeing sports figures display their anger in the same manner that “everyday people” have?

Glover: Part of the beauty of covering athletes is seeing their "human side." Kevin Durant walking through the tornado ruins in Moore, Oklahoma, the following day was shocking to me. I heard how he wanted to remain in Oklahoma City for the remainder of his career. Seeing him in that light proved it to me. In relation to the Zimmerman verdict, I believe the heavy racial undertone of this trial causes players to back off even if it was something they could all relate to.

I remember speaking with Josh Smith, Joe Johnson and Kirk Hinrich not long after Trayvon Martin was killed. None of them hesitated to speak from their heart. I learned a long time ago that there aren't many Muhammad Alis or Jim Browns left. At the same time, just because I don't see a Tweet or Facebook status doesn't mean said athlete isn't working behind the scenes for the cause.

Sideman: I think that professional athletes and team personnel have responsibilities to rein in their fury when it comes to managing anger on social media, regardless of topic. I don’t bemoan them from expressing their opinions on any topic. Just do it with some restraint and care for how they word their posts. We’ve learned that even 140 characters can come back to bite otherwise respectable images.

TSFJ: Prior to the recent dedications at some concerts after the verdict, Lauren Carter at The Grio highlighted the lack of response of many heavyweights in the hip-hop world, an arena where gun play is littered in the lyrics and beats as much as fraudulent finances and clothing references. For The Huffington Post, Adam Hanft wonders what would happen if the same did more besides tweet about the verdict or dedicate songs in concerts. It’s in contrast to the noted reactions from athletes, who typically get the “shut up and play” treatment and certainly after the backlash towards Roddy White, Victor Cruz and others.

From the three largest facets of entertainment — sports, music and acting — are there separate standards for who speaks in each group and who does not?

Glover: Speaking for hip-hop artists, it's a double-edged sword. Many of these artists were inspired by what they've seen and realized the only way out of that trap was to put it on a track. Once in the game, the machine wanted more of the same street chronicles because it's what sells. Look at the Geto Boys' first three albums; they were damn near banned because of the content, but in the same breath are hip-hop classics and rightfully so. Scarface is more socially and politically conscious than he's given credit for.

Sideman: Like athletes as they hopefully take my advice(!) and exhibit restraint with social media posts and traditional media interviews, it behooves musical artists to use their platforms for good. As President Obama and others suggested, let a situation like this be a catalyst for constructive and peaceful discussion within our communities about how we can make them stronger instead of instigating acts of hatred. That includes singing, speaking or screaming profanity-laden and violence-loaded lyrics.

TSFJ: Though the hand may be a bit overplayed at times, the importance of social media is undeniable when it comes to awareness of underreported stories and espousing alternate views on those that dominate the headlines. Yet, because of the “everyone plays” model of social media — fans, media and athletes have never shared a media tool with such free and equal access before — the scrutiny of what a sports figure says or doesn’t say is even more intense. Do you think that more and more sports figures will shy away from speaking their minds because of said scrutiny? Or is it possible that they will be emboldened by taking stances a la Brendan Ayanbadejo, Donte' Stallworth, Etan Thomas, et al.?

Sideman: If the past few years are any indication, athletes won’t avoid social media because of potential public scrutiny. They’ve learned that criticism comes with the territory as much as praise. What they must remember and practice is restraint. They must realize that if they post hateful words, they have the power to insight societal rage because kids and fans want to be like them.

If fans disagree with them and express vitriol via social media, athletes have to learn to take a breath, consider that many in the general public simply want their 15 seconds of fame by appearing in their social media streams, and ignore it. If responses are threatening in any way, they should immediately report it to club and league personnel as well as law enforcement. You can never be too careful.