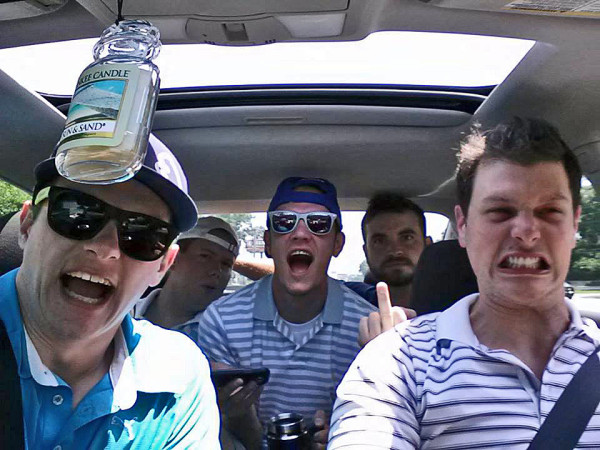 I came home Tuesday evening to a cat on her last of nine lives. She lied in the driveway and inched closer to death.

Hours later, she died. After 19 years, the last of my family pets left.

Say this for Marble, she kept her loyalty. Her usual spot on the driveway was where she last walked. Loyalty, the invisible tie that binds, is something that’s recently been on my mind.

You can write words and connect everything in life to sports. Given this outlet, that’s probably the thing to do. Real sports fans hold loyalty dear, and those who maintain it are granted immunity among other diehards. Aside from daily work on a high school sports beat, the games haven’t affected me much for the past few months.

Last Saturday included a lost key and wallet, stolen sunglasses, a walk through Washington’s Gay Pride parade and a spot in line next to an Eastern European dwarf in high heels. It ended with a five-story climb of a fire escape at 4 a.m.

It happened due to friends. To close the circle, I opened the door at the building I climbed to let in a dear one. He worried I was hurt moments after he encouraged the crazy idea.

Take a look around at the people who keep you whole. They come in every type of color, size and background. We love them because they are as loyal as Marble. We hold their loyalty in the highest esteem.

Unsurprisingly, many of my friends are also fans. Some of them, athletes. Two weeks ago, a trip to Myrtle Beach with seven buddies for a bachelor party pushed the knife against my mind and forced memory. All of us met on the little league diamonds and basketball courts. Years later, we celebrated Kevin’s engagement with golf, cigars, cigarettes, booze for them and caffeine for me.

With the World Cup around the corner, I think of Justin and the Netherlands. He became my friend in 2004 as a foreign exchange student. We watched the European championship together. Until recently, I only watched international soccer for the Dutch. I have seen him once in a decade but still consider him close to me. When the Euro and World Cup roll around, we constantly stay in touch on Facebook. I guess the site’s good for something, after all.

Sibi — the friend who persuaded Saturday’s climb — recently convinced me to root for Everton in the English Premiere League. He’s loyal to them. I’m loyal to him.

Friendship is one of the most important things we experience. It’s affirmation of personality and character. Our friends laugh at the jokes, listen to the stories and help us make many more of both. They choose us for us; we choose them for them.

At the beach, we experienced the time that sets the bar for déjà vu. I couldn’t help but step back and wonder if it would ever happen again. All of us stay close, which is tough to do when life happens. Maybe I’ll see some of them in a few years like I see Justin now. Friendship knows no time frame. Sibi spent a few years in India, came home and we picked up where we left off.

The fans' loyalty is bred within. They often place high value on it. I can empathize with rival fans despite their loathsome squads if they are loyal followers.

Not long ago, a man whom I believe to be brilliant told me from an outsider’s perspective he thought sports were the new religion. People watch the NFL instead of going to church, he explained.

It’s simple, I replied. We still want something to believe in. While simplicity can be traced to teams and players — some would call them false idols, but that’s no fun — it’s apparent that we want something to hold our loyalty. It’s an investment that we make in ourselves as much as our teams.

Such an investment is worthy of our truest friends.

I have been kicked in the side with life’s boot a number of times. Bruises and scars came. People left. Some died. Some walked away. Some ran. Here I am, with an appreciation of those who keep me close. Without them, there is no one to call even if it’s just to chat about the game.

On this very site, I’ve touched on the friends topic. I wrote about my best friend a lifetime ago in my father, my compadre in the most recent lifetime in my dog and the connection between sports fans as friends. I’m proud of all of the pieces. Even as an unforgiving taskmaster of myself, I can frame those on the walls of my memory.

I sit at a desk and type words to bring it all to life. See me as I shimmied on a rooftop with my belly on the gutter for my friend below. He was tired, needed sleep. I got him inside to a place where he dozed.

On my own, I slept on the stoop. The only times I consistently put others before myself is for my friends. They keep me going, and here I am, with a salute offered to their ways. Only the truest can put up with my craziness.

There will never be a moment when a rational fan accurately calls me out for poor fanhood. The requirement for membership is consistent loyalty. My friends will never be able to say I’m not there when they need me most. I can’t say my cat wasn’t always near when I needed something to pat on the head.

If we feed our souls with the good stuff, we can overfill moments later. When memories are collected, no one thinks back to the lonely and normal days. The friends, pets and fans help make us what we are.

We aren’t the best we can be on a routine basis. Loyalty brings that out of us. It keeps us whole and reminds us of the people we can be in our finest hours. Maybe we’ll find our spot to die down the road and find those most loyal around us. When they’re there, we’ll know we can go in peace.