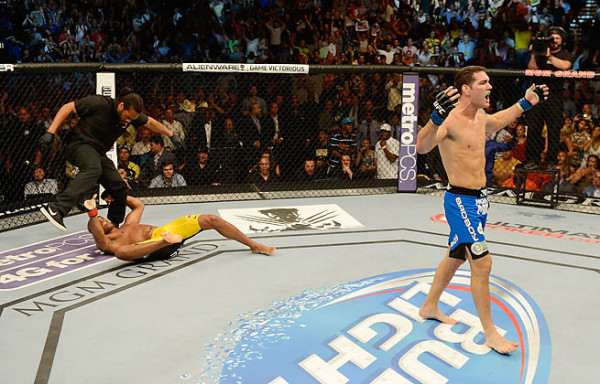 Anderson Silva’s loss at UFC 162 has writers, fans and fighters in a tailspin. The shocking conclusion to a night of enjoyable performances across the board eclipsed everything that came before it. Applauding Tim Kennedy’s defensive jujitsu against one of the greatest Brazilian jujitsu (BJJ) practitioners in the world, remarking how weak NCAA Wrestling National Champion Mark Munoz’s double-leg defense was at the beginning of his fight, or noting several other key points prior to the main event is difficult to do on the same night that the greatest mixed martial artist ever ended his incredible win streak.

In the immediate aftermath of Silva’s second-round KO at the hands of Chris Weidman, there was a deluge of comments across the various forms of social media. As shocking as some comments were, like that the fight proved that Anderson Silva was overrated or that he simply grew old overnight, the comparisons of the night’s results to boxing were equally surprising and more misguided.

The presence of former pound-for-pound boxing virtuoso Roy Jones Jr. at ringside seems to have had much to do with the ill-conceived comparisons. Leading up to UFC 162, Dana White and Anderson Silva had started the promotional machine on a potential match-up with Jones. As enticing as that fight was for many, to this writer, it was a match-up at least five years, if not a decade, too late. Jones is a shell of his former greatness, and with the superlative punching and head movement Silva displayed in recent fights against Stephan Bonnar, Yushin Okami and Forrest Griffin, a fight against Jones seemed a recipe for disaster for the boxing legend. The Jones that KO’d Montell Griffin, however, would have eviscerated Silva at any age in a boxing ring.

Nonetheless, Jones’s presence at ringside had several comparing Silva’s loss to Jones’s own knockout loss to Antonio Tarver in 2004. Those people need to check their facts and the tape. Jones was knocked out with a counter left hand after a brief exchange. Jones wasn’t showboating in any manner resembling Silva. More importantly, Jones’s loss occurred within the context of a severe weight cut.

Only six months earlier Jones had beaten Tarver in a difficult fight, Jones’s first since engaging in the unique mission of becoming the first middleweight in over a century, and the only super-welterweight (154lbs), to also win the heavyweight crown. Jones accomplished his mission but only after gaining nearly 30 pounds of muscle to compete against WBA Heavyweight Champion John Ruiz. Jones was never the same after cutting the weight to make the light heavyweight limit to face Tarver. Silva gave up his chin (and the resulting KO) to Weidman, while Tarver brutally took what remained of Jones’s greatness after his radical shift in body weight.

A much better cross-sport comment from the Twittersphere was that Silva’s loss exponentially increased interest in Mayweather vs. Canelo. For crossover fans, or casual viewers, Silva’s emphatic defeat is a reminder that in the fight game no one is infallible and on a given night even living legends can come up short. But let’s be clear, if Mayweather were to lose, or dare I say get knocked out, you can be sure it won’t be for the reason Silva was dethroned. Despite Mayweather’s well-documented antics outside the ring, he’s never demonstrated the defensive carelessness Silva has repeatedly engaged in inside the Octagon throughout his career.

Even with a tight defense like Mayweather’s, he can still be hit and, therefore, knocked out. It’s all possible inside the ring. That goes two or threefold for those brave, or foolish, enough to walk into a fight hands down. “He got clipped,” Dana White said of Silva at the post-fight press conference. It’s as simple as that. On any given night anyone can have his or her lights turned out. When the rematch happens, I have little doubt that Silva will do everything in his power to avoid a repeat of the night’s ending, including employing such ordinary techniques as fighting with his hands up.

Even though it’s difficult to talk about anything but Silva’s loss, following are the highlights of the fights from earlier in the night. 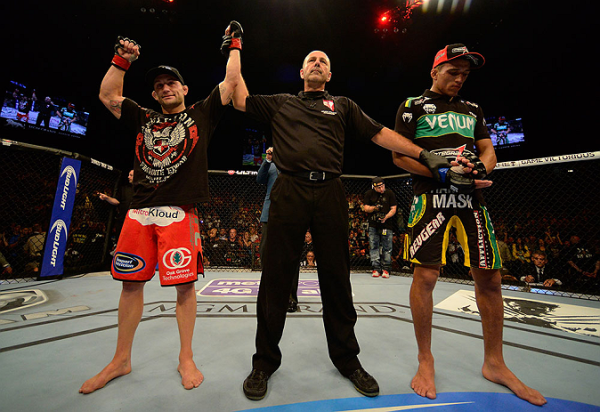 Edgar’s victory against a game Oliveira was clear but hard fought. The Brazilian’s lanky frame gave Edgar problems throughout the fight. Even though Edgar was able to knock down Oliveira at different times, Edgar seemed small and underpowered. He’s already moved down from 155 to 145 pounds to seek out a new belt. Paradoxically, instead of looking big for the new smaller weight class, he seemed like a 135-pounder coming up in weight. Perhaps as he settles in to the new class he’ll find the right weight-cutting routine and his seeming size issue will fade away. One hopes. In any case, it’s good to see Edgar back in the win column.

Several expected the Special Forces Green Beret and Strikeforce standout to defeat Roger Gracie. What even those people worried about, however, was what would happen if Gracie, a seven-time BJJ World Champion, got Kennedy on the ground. Kennedy did two things: punch Gracie in the face and get up. The story of their fight was Kennedy’s surprising ability to defend against Gracie’s submission attempts while inflicting some damage from compromising positions on bottom. At the post-fight press conference, Kennedy expressed disappointment at his victory, and considering the quality of talent in the middleweight division (Silva, Weidman, Belfort, Munoz, Bisping, etc.) it makes sense. Before Kennedy faces any of these fighters perhaps he can meet up with Luke Rockhold in a rematch of their Strikeforce championship fight. With Kennedy coming off a win and Rockhold off a loss, maybe the time is right to see which Strikeforce fighter will survive in UFC waters.

Munoz made a triumphant return to the UFC after a KO loss to Chris Weidman and a long layoff. The victory was achieved in a classic grinding style that Munoz has become known for.  However, he looked much sloppier than when he left, falling into several guillotine choke attempts that a better fighter than Tim Boetsch could have finished. Munoz’s inside trip took Boetsch to his back several times, giving Munoz the top position from where he is so effective. If he’s lucky enough to get a crack at Weidman (which I doubt considering Dana White was emphatic about a Silva-Weidman rematch), Munoz will need to come up with a different takedown other than his sweep and tighten up his game, or else he’ll end up right back where he was year ago — watching Weidman get his hand raised.

Swanson and Siver delivered a fabulous fight. Swanson had a rough first round, with Siver showing early that he was the stronger fighter and at points the faster one too. In the second round, however, Swanson started to turn around the tempo and momentum of the fight with well-timed counter punches. As the fight progressed, Swanson demonstrated the type of grit that allowed him to create the opportunities to knock out Siver. It’s exactly that type of heart that distinguishes good from great in close fights and earns fight-night bonuses. Swanson and Siver each received a $50,000 Fight of the Night bonus.

In a certain light, Swanson’s fight can be compared with that from fellow Palm Springs native Tim Bradley against Ruslan Provodnikov. That boxing match was an all out war that had several shifts in momentum. As a Palm Springs native myself, I wish both Bradley and Swanson continued success but hope their grit doesn’t become the hallmark of their fighting styles. Often, gritty fighters are picked apart by technicians: like Jose Aldo, whom Swanson wants to fight next, or Juan Manuel Marquez, whom Bradley is slated to fight on October 5. Guys who use grit as a fighting style instead of a tool in their arsenal — even if they have long, successful careers — pay greatly for them in the second act of their lives, long after their hands have been raised for the last time. There’s no better or sadder example than Muhammad Ali, who fought the second half of his career with grit, with the knowledge that he could take a punch instead of with the uncanny boxing ability that defined his rise to boxing glory.