Undefeated boxing prodigies Teofimo Lopez and Shakur Stevenson highlight the undercard of the Madison Square Garden held Terence Crawford and Amir Khan Welterweight title bout Saturday on Pay Per View. Both spoke to reporters at the nearby Stewart Hotel just over 48 hours prior to fight night.

One week ago, Vasyl Lomachenko (13-1, 10 KO’s) did this to an overmatched Anthony Crolla.

Six days following this knockout, Teofimo Lopez (12-0, 10 KO’s) – who is trying to land a fight with the consensus pound-for-pound top-two pugilist – called him a b*tch.

“I think he’s just aggravated about, ‘Who is this kid and why is he talking so much? They should be talking about me,’” said Lopez – who fights Edis Tatli (31-2, 10 KO’s) on Saturday in Madison Square Garden – of Lomachenko.

“Lomachenko’s a diva … he’s a b*tch. And he’s very delicate about his things. When he gets hit in the face and he gets bruises, he gets upset. Very angry and everything. So you take those little things and use it against him.”

Whether it’s all part of Lopez’s strategy to garner interest in the potential super fight with the WBA Super and WBO Lightweight World Champion or not, it does add awareness to Lopez’s spot on the Terence Crawford versus Amir Khan Pay Per View undercard this weekend.

His little known opponent is a two-time European Boxing Champion, who will be making his American debut on Saturday, and has only fought outside of his native Finland on one other occasion. It may appear too much too soon on the surface but Lopez believes he’s entitled to Lomachenko or any title shot shortly after winning Saturday, assuming he takes care of business.

“Hopefully we make it in July and it can be a great one,” says Lopez, often accused of arrogance, before pointing out that he thinks he could sell out MSG this summer.

“I’m always gonna be overlooked … I guess I’m just one of those guys that they don’t believe it … I’m very outspoken but I think it’s just because I’m that good,” Lopez adds, citing his 150-20 amateur record.

(Lomachenko was famously 396-1 as an amateur, as well as a two-time Olympic Gold Medalist, before turning pro. It explains his accelerated upbringing, including a world title opportunity in his second pro fight.)

But is it too early? The same will be asked of his fellow 21-year-old Shakur Stevenson, the co-headliner on the Crawford-Khan card.

You may remember the Olympic Silver Medalist Stevenson from the summer of 2016. Many thought he was robbed of the gold.

You may have also seen him featured across ESPN platforms as his fights grow in importance, despite only a 10-0, 6 KO pro career, which began on April 22, 2017, almost exactly two years ago. The featherweight’s quick arrival lands him in a fight with world title contender and previous championship challenger Christopher Diaz of Puerto Rico (24-1, 16 KO’s), a match-up that even has Top Rank concerned.

“Absolutely, we're nervous,” Top Rank vice president Carl Moretti told ESPN in a story published this morning. “People are building up (Stevenson’s) last two opponents more than they were. The results of the last two fights, he didn't struggle with them, but Christopher Diaz is much better than them … Shakur and his camp have a lot of confidence against Diaz, so we decided to make the fight … We can barely live with that fight.”

Stevenson believes the time is now regardless of Top Rank’s trepidation, as well as general concern from fans and media.

“I don’t really care what a lot of people think. I’m ready to fight,” Stevenson says, mostly directed toward the public outcry of stepping up in competition so quickly.

“They gonna doubt me regardless, I see. I’m gonna keep doing what I’ve been doing for the last four or five fights and they’re still doubting me. I feel like I don’t get the respect I deserve. It is what it is.” 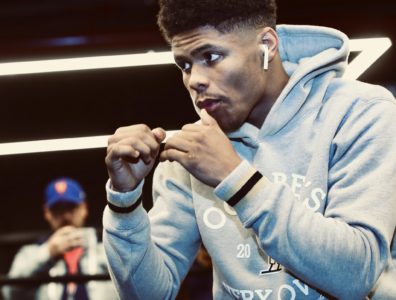 Stevenson adds that if he handles business, he too should be in line for a world title opportunity just by virtue of defeating Diaz, who lost his world title bout last July.

On one hand, this is obviously too soon considering neither Lopez or Stevenson's debuts are three years old. In theory, the 21-year-olds have time to develop before being ready for world championship caliber competition.

But do they really have time? This is boxing. Boxers have no unions. You don’t do your time and then retire with a pension. It’s literally prizefighting, where the ideal objective is to deliver punishment, but minimizing the punishment delivered onto you – a nearly impossible task.

There are countless examples of our favorite fighters becoming vegetables later in life because of their participation in too many wars or competing for too many years, and in other instances, they don’t make it to later in life.

Both Lopez and Stevenson will turn 22 during the summertime. Sure, they are still growing into their bodies, but getting to the money as quickly as possible – especially given that their talent level may already warrant such stature – should probably be encouraged in this particular scenario.

It’s not like Top Rank doesn’t know how to matchmake. Bob Arum is often cited as the best promoter in the boxing history. The bigger concern should be that each fighter has a solid inner-circle who could help manage the large purses on the horizon. Lopez hinted as such Thursday.

And for what it’s worth, both have the confidence to be here, which is at least part of the battle.

“I feel like Teofimo is a superstar and Devin (Haney) also, he’s a superstar. But I feel like I’m the top dog, to be honest with you. I went to the Olympics, they had the same opportunities I had coming out of the gate, and I’ve done what I had to do. I’m the leader of this generation,” Stevenson said.

The ESPN PPV card begins at 9 p.m. Saturday. Both Stevenson and Lopez are wide favorites in their respective bouts.

I know, I know. I've aged poorly. I also know that neither you or I actually believe that. I cover NYC sports + more in a variety of ways. 4x NYPA nominee.