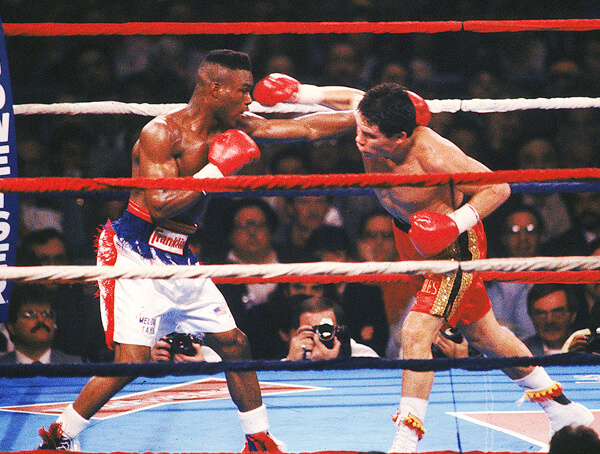 On paper Julio Cesar Chavez vs. Meldrick Taylor gave all the signs of something special. The B-side of the attraction was a 1984 Olympic Gold medalist, with what Bernard Hopkins would undoubtedly call a “slick Black” style. But Medrick Taylor’s temperament never let him use his hand and foot speed, to the detriment of action in the ring. On the contrary, he embraced a hard, close-in scrap that fight fans loved.

The A-side of the bout was already a living legend. At 68-0 with 55 KOs, Julio Cesar Chavez not only had a win streak that outshined Sugar Ray Robinson, Willie Pep and Rocky Marciano, he also fought with the ferocity and temerity that an entire nation took as a symbol of its own spirit. A clash of styles, a clash of nations and a clash of race, it was boxing promotion at its most divisive and, thus, its most exciting.

The fight as a whole would win The Ring magazine’s Fight of the Year honor for 1990 and would later be dubbed Fight of the Decade for the whole of the 1990s. But that fight, in memory as well as in fact, is all about one round — the 12th.

In the final three minutes of this epic fight, the living legend, Chavez, was clearly on the losing end of the scorecards, even though Taylor’s face and bloody shorts showed quite intensely who’d received the most punishment that night. When the brawler and body-punching machine was on the verge of defeat, did he walk quietly into the night, comforted by his huge payday? Or did he push recklessly forward, working for the concussive ending that could still bring him victory? Watch and see. The fight’s resolution is nothing less than dramatic, controversial and immortal.

Tomorrow, another hard-punching Latino, Marcos Maidana, will meet a slick Black American fighter, Floyd Mayweather. Their fight might come down to the final three minutes, as did this historic fight. Then we’ll see not just whether Maidana’s trainer Robert Garcia's proclamation about how to beat a slick fighter is true. We already know it is.

Garcia has said that great technicians like Sugar Ray Robinson, Sugar Ray Leonard and Muhammad Ali are beaten by gusty, come-forward, pressure fighters. There’s little question that he’s at least partially right. Pressure fighters certainly can beat slick technicians, but when you talk about the Robinsons, Leonards and Alis, you’re talking about all-time great slickness. To beat men like that, all-time great pressure fighters — Jake LaMotta, Roberto Duran, Joe Frazier — are needed. We know Mayweather is all-time great. The question is whether Maidana, for at least one night, can muster up a performance that is even a shadow of the greatness that LaMotta, Duran and Frazier gave on the nights they felled legends.

One Reply to “Thunder And Lighting: Julio Cesar Chavez Vs. Meldrick Taylor”