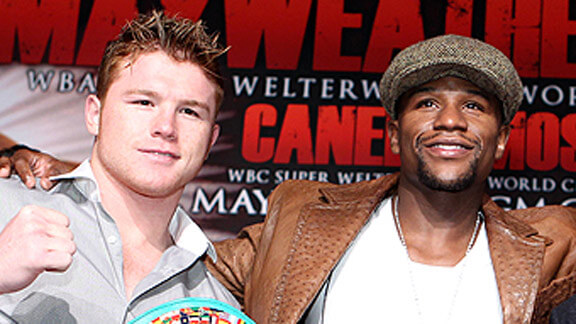 Here I was preparing an article about Canelo Alvarez’s recent comment that he would only face Floyd Mayweather at 154 lbs, when Mayweather announced via twitter: “I chose my opponent for September 14th and it’s Canelo Alvarez. I’m giving the fans what they want…” And with that, the stage was set for the best matchup that can be made in boxing today.

The fight will take place at the MGM Grand and will serve as a junior middleweight unification bout. While there’s no word yet on glove size—which was a point of contention in the Mayweather / Cotto negotiations, where Mayweather requested 8oz gloves, and Cotto 10oz ones—we do know the fighters will be meeting at a catch-weight. This is a departure from messages both fighters have been sending the public for a while.

On Mayweather’s end, he promoted his fight with Miguel Cotto largely based on the fact that he was wanted to face an undrained Cotto, a Cotto at his best. Mayweather’s comments were a direct jab at Manny Pacquiao, who forced Cotto to dehydrate down to the welterweight limit of 147lbs. Obligating Canelo to drop two pounds below the junior middleweight limit of 154lbs seems to undercut Mayweather’s earlier promotional position against Cotto. It’s somewhat disappointing in that I can already hear the Mayweather doubters use the two-pounds to undercut what I believe will be a clear victory. From a strategic point of view, the catch-weight will force the already large Canelo to work slightly harder to make the weight, which could have serious repercussions.

In Canelo’s last outing against Austin Trout, he looked sluggish toward the end of the fight and attacked only in spurts, as if he lacked the energy to fight a full three minutes each round. Cutting an extra two pounds will only exacerbate any endurance issues Canelo has, but if he’s truly dedicated to his craft, he’s got more than enough time to remedy those shortcomings.

On the weight issue more generally, Canelo has blatantly flip flopped to suit his needs. Just days ago he laid down the public ultimatum that I thought might derail a possible showdown with Mayweather. Canelo said, “I am willing to fight with him [Mayweather], but I won’t walk away from my division…it would have to be at my weight [154 lbs].” Apparently, Canelo didn’t learn anything for the last public ultimatum he issued Mayweather.

For months leading up to Mayweather's bout against Robert Guerrero, Canelo was lined up as a co-main event on Showtime’s spectacular May Day card. Then came the ultimatum. Canelo refused to fight on the card unless Mayweather signed a contract stating that if both fighters won their respective bouts they would square off in September. Canelo's deadline to sign the contract came and went. Mayweather didn't even address it until after Canelo pulled out of the co-main event, choosing instead to headline his own card against Austin trout in the Alamodome.

Clearly, Mayweather did not respond favorably to Canelo’s pressure. And why would he? After all, Mayweather is the top PPV draw in boxing. He’s the highest paid athlete in all of sports. Canelo’s claim to financial leverage at the moment is based on selling nearly 40,000 tickets at the Alamodome. Although a laudable feat, that's just not on par with Mayweather's buying power, especially considering some seats in San Antonio sold for as low as $10.

Given that, I thought the fight was in jeopardy when Canelo issued his second ultimatum about the weight issue. The ultimatum was brash, short-sighted, and hypocritical. Two years ago, leading up to Canelo’s fight with Matthew Hatton, living legend Juan Manuel Marquez critically, but fairly questioned Canelo’s resume.  That started a rivalry that has lived on to the present. At the start of their tiff, both men exchanged heated words on a popular Mexican radio show, where Canelo first challenged Marquez to a fight at junior middleweight and then at welterweight! My Spanish speaking readers can see the exchange here. The young champion was willing to drop to 147lbs to fight the much smaller Juan Manuel Marquez, but not Floyd Mayweather, but ultimately agreed to a catch-weight to face the pound-for-pound king.

Flip flops like Canelo’s are common in boxing. Perhaps I make more of the incident because Canelo had the audacity to speak down to Marquez, one of my favorite fighters and without question one of the top three greatest Mexican fighters of all time.

Canelo is an upstart, a talented one, but an upstart nonetheless. He's shown marked improvement fight after fight, and at the moment presents the most intriguing matchup for Mayweather because of his youth and size. Despite his ultimatums, Canelo is being offered boxing’s golden ticket so he my feel all’s well that end well. Maybe, however, he’ll come to realize that his fast talk lost him two pounds he’ll desperately need. Or maybe he’ll realize all the pounds in the world wouldn’t have made a difference. Lucky for fight fans everywhere, we’ll know very soon. In 107 days we separate the men from the boys, the great from the good, and the king from the pretender.