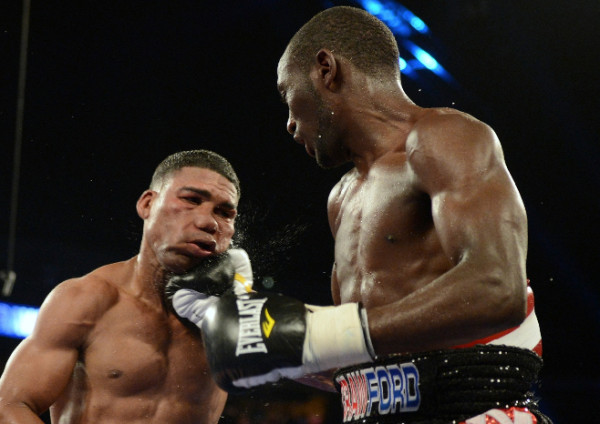 There’s another fight of the year candidate, and this one confirmed there will soon be waves in the already stacked 140-pound division. Terence Crawford, a native son of Omaha, brought back championship boxing to his hometown for the first time in over 40 years. Against Yuriorkis Gamboa, a Cuban-national and 2004 Olympic Gold medalist, Crawford delivered a career-defining performance that will not be soon forgotten by boxing fans — and probably never by the citizens of Omaha.

There are always at least two narratives to a fight — one for each fighter stepping into the ring. On the surface, Crawford was defending his lightweight title for the first time on Saturday. He used his newly won crown and growing popularity to push his promoter to hold the fight in his hometown. But what he wanted most, after 23 fights, was a coming-out party.

Despite his often-impressive victories, Crawford’s list of opponents lacked a truly dynamic fighter, the type of guy who not only had won titles but who critics and fans both thought about as star potential. A victory over a guy like that would help cement the name Terence Crawford in the minds of boxing fans.

Across the ring, it might be said that Gamboa came into the fight hoping to reassert his significance in the boxing world. Once a blue-chip prospect, promotional conflicts and other legal issues led Gamboa to long stretches of inactivity, followed by lackluster performances against mediocre opposition that caused Gamboa to slide into irrelevance. Gamboa undoubtedly came into the fight against Crawford hoping to change that, and yet, at the end of the day the most important thing on his mind was likely dollar signs.

A few years ago, he walked away from an exciting fight against Brandon Rios because he decided he wasn’t getting paid enough. More recently, in negotiations with Rios’s stablemate, Mikey Garcia, money issues once again played a role in putting an end the fascinating match-up.

Gamboa knew that if he wanted to go from just demanding big paydays to actually getting them, he needed to give his promoter, Curtis Jackson (AKA 50 Cent), a bargaining chip to entice networks and fans into wanting to dish out the cash. An impressive showing against a potentially great Crawford gave him just that.

Three rounds into their fight, Gamboa likely felt like he’d made the match-up of a lifetime. In Crawford’s backyard, Gamboa was out-jabbing the taller fighter, pushing the pace, landing more and showing the boxing world that he was faster than the man many thought had the fastest hands in boxing.

In the fourth round, Crawford made the seemingly crazy decision to switch into a southpaw stance that opened him up for right-hand leads that Gamboa landed more than a few times. Before Crawford caught Gamboa with a left hook from the southpaw stance in the fifth, close observers started to notice that Crawford’s adjustments were starting to bother Gamboa. Then the left hook landed and sent Gamboa down with such force it looked like Gamboa was bellyflopping onto the canvas. 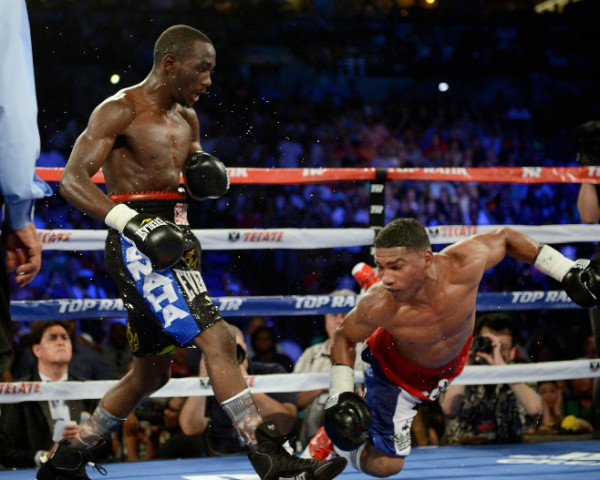 After the knockdown, Gamboa spent two rounds trying to recover, without much success. He was visibly deflated, lacking pop, energy and defense.

Although Gamboa was able to land a couple of lead left hooks against Crawford in the 8th, his unwillingness to consistently keep his hands up sealed his fate. In the ninth, Crawford drilled Gamboa with a left hook, followed by an uppercut that put Gamboa down. At that point, it looked like Gamboa didn’t want to finish the fight on his feet. He charged recklessly forward, looping punches from his hip, with his hands down. Crawford knocked him down again before the referee stopped the fight — saving Gamboa from himself.

The Cuban would later say:

“I think it was a good fight … The referee made a decision that I was [unable to go on]. We will respect the decision of the referee, but I could have continued.”

Words from a proud fighter who needed saving. When you get hit with an uppercut like the one that took Gamboa off his feet with 11 seconds remaining in the 9th round, it’s time to call it a night.

What was most impressive about Crawford’s performance was not his punching power (although it was flashy and noteworthy), it was not the 10,000-plus crowd he pulled in to Omaha’s CenturyLink Center and it was not his speed. It was his composure. What does composure look like? It looks like Crawford’s face in between the third and fourth rounds, after he was clearly being beaten to the punch by a smaller man who until relatively recently was a few weight classes lighter. In that minute, there was no panic or quit in Crawford’s face. There were only calculation and attentiveness. He took in what his corner had to say, processed it and executed. Crawford demonstrated championship-level composure against a guy who once electrified boxing (albeit in at lighter weight divisions).

It’s still too early to call Crawford “great,” but he’s certainly not to be missed. Crawford’s next move is to the 140-pound division. Especially with the promotional Cold War between Top Rank and Golden Boy on its way to a truce, there will be no shortage of exciting match-ups for this sharp boxer, hoping to be the next pay-per-view star. Put him in against Chris Algieri or Brandon Rios and I’ll mark my calendar; put him in against Danny Garcia and I’ll open my pocket book.

One Reply to “The Magic Is Back In Omaha: Terence Crawford KO's Yuriokis Gamboa”