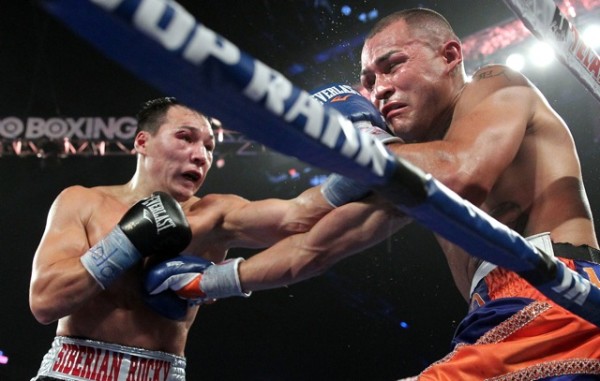 In the weeks leading up to Saturday night’s spectacular 140lbs championship fight between Ruslan Provodnikov and Mike Alvarado, the Siberian Rocky made it very clear, that will would determine the outcome of his fight against Alvarado, not skill. In HBO’s Face Off, Provodnikov sat face-to-face with Alvarado to discuss their impending fight. With Provodnikov’s steely affectionless gaze it was impossible not to take in his every word with the utmost gravitas. He didn’t care about titles or money, he said. It was about the fight. It was about the glory of the contest of wills--flashy words that often look better on paper than they usually do on fight night. But not for this man. Not in this fight.

There was no hesitation in Provodnikov. There was no waiting. No space for Alvarado to breathe from the opening moments of the first round. Within the first minute, the Siberian Rocky seemed to land hard punches that had the champ fighting off his back foot. The constant pressure stuffed Alvarado’s punches and brought excitement to anyone with eyes.

Alvarado wasn’t the champion for no reason, however. For pieces of the succeeding rounds he employed the best boxing he could muster, using his longer jab and quick feet to try to tame the bull in front on him. At times, he found success, and even moments where convinced everyone that Provodnikov might be hurt—everyone but Provodnikov that is. For even at his best, Alvarado never seemed to show the pop that he used to rock Brandon Rios. He couldn’t ignite the same danger in his opponent on Saturday.

Even still, the fight was a magical blend of boxing and scrapping. The ebb and flow between the two halves of the sweet science was seamless. Character and grit flowed into technique and reflexes and back again so smoothly that all fight fans must have enjoyed the duel.In the end, however, the incredible work rate of Provodnikov, not to mention his impervious chin and determination, conquered Alvarado’s boxing. To any man, Provodnikov’s persistence in light of the punches he was willing to take, would be disheartening.

In both the Eighth and Ninth rounds, Alvarado was pummeled with expertly placed body to head combinations and seemed on the verge of getting knocked out. But it wasn’t until a final beating toward the end of the tenth round that left him confused and in the wrong corner that Alvarado was ready to call it quits.

On his stool, taking in his short reprieve from the blows, Alvarado stayed silent when the referee asked him multiple times if he wanted to continue. After the TKO was announced and Alvarado was back in his locker room he was far more candid than most fighters would likely have been. He said that he was taking too much punishment and admitted being afraid of the damage that might result.

After putting on a show and pushing himself to the limits, there’s no shame in such an admission--quite the opposite. Few men ever sign up to have their mettle tested in such a fashion, and even less are willing to admit that they were tested and they were found wanting.

Taking this performance and his earlier near victory against Tim Braldey into account, it's clear that anyone thinking about getting in the ring against Ruslan Provodnikov must bring with them more than just refined technique. Provodnikov will test your heart, one way or the other.

Now the question becomes whether any of the big names from 140 to 147lbs will have the grit to meet Provodnikov in the squared circle. Danny Garcia, Tim Bradley, Floyd Mayweather, Adrien Broner, Marcos Maidana, Lucas Matthysse, Manny Pacquiao. Who among them is prepared to willing enter the ring to face off against Provodnikov, and stare at his cold visage and say, "my heart is bigger than yours"? Whoever has the guts, I applaud them, and wait in eager anticipation.

One Reply to “Ruslan Provodnikov: Will Over Skill”