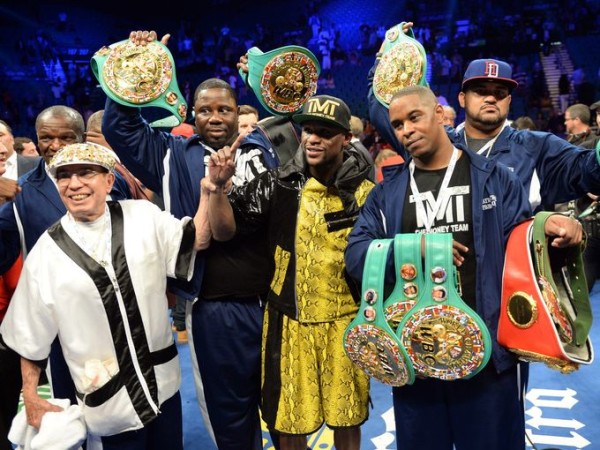 Floyd Mayweather Jr. has often warned would-be challengers, “It’s different when you get in [the ring].” Mayweather’s critics, from pundits to those hoping to dethrone him, say that he’s slowed down, has started to fight flat-footed, and has spent more time in the pocket where he can be hit. They bring up statistics, like Mayweather’s modest KO percentage since stepping into the welterweight class. In rote fashion, they recall the success Jose Luis Castillo had against Mayweather back in 2002, saying that pressure and effective body punching is the blueprint for blemishing Floyd’s perfect record. But they all seem to ignore Mayweather’s simple truth: It’s different looking from the outside in.

When it comes time to step in between the ropes and match wits with Mayweather, the time for comfortable armchair analysis is at an end, and all that’s left is the all-important question: Who will make the necessary adjustments, faster and better? This past Saturday night, for the 44th time in his illustrious career, Mayweather — at 36 years of age — showed that no one in boxing, perhaps in all of combat sports, adapts and adjusts better than he does.

In the first round, Roberto Guerrero established a pattern that would play out the remainder of the fight: He was patient, didn’t rush in recklessly, and when in the clinch, tried to replicate his success against Andre Berto. Mayweather landed his right-hand lead, fought in the pocket while avoiding the vast majority of Guerrero’s blows, and showed the giant chasm that exists between his prodigious boxing skills and those of Berto.

Over the course of the fight, Mayweather landed his lead right with increasing frequency and intensity. Toward the end, as Guerrero began to throw caution to the wind, Mayweather started to time Guerrero’s lunges with a counter uppercut that may have ended the night, had it not been for Mayweather’s injured hand and lack of time. From the middle rounds on, Guerrero wore his confusion on his face. The difference in hand speed, defense, and believe it or not, physical strength, surely surprised him.

As Guerrero plodded on, missing, getting hit, and helping Mayweather paint his latest boxing masterpiece, it was hard not to remember Mayweather’s warning, “It’s different when you get in there.” Mayweather made beating Guerrero look easy. The scores reflected as much. All three judges had the fight 117-111.

Mayweather showed very convincingly that he is still the pound-for-pound king. 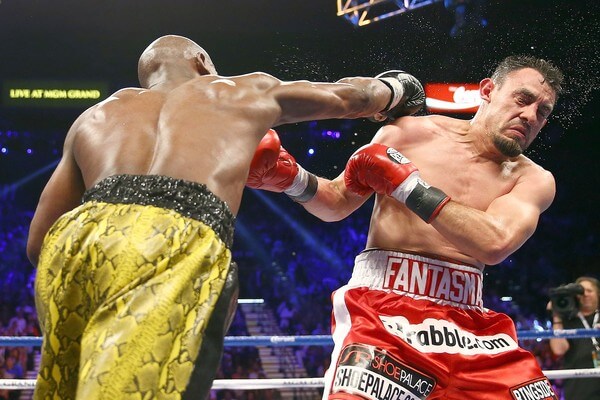 His timing is still there. That is as much a function of his intelligence as it is of his physical ability. His hand speed still befuddles his opponents. That speed is as much a testament to his genes as it is to his work ethic. And despite what people say about Mayweather’s lack of movement, his legs are as strong as ever. If you watched the fight closely, you noticed that Mayweather was always on the balls of his feet, especially his back foot. With his back heel raised he can quickly explode with his right hand and propel himself out of harm’s way. And in the final round, everyone saw quite clearly how much pep Mayweather still has in his legs.

Despite his impressive display of boxing craft, some people may have wanted more from Mayweather on Saturday. They may have wanted to see him throw more punches or to press for a knockout. Showtime announcer Brian Kenny said just that in the post-fight breakdown.

But the difference between winning, or rather, being perfect, and stretching for a KO that isn’t really there is the difference between Mayweather’s unblemished record and the countless good boxers out there — Andre Berto, Selcuk Aydin, and Michael Katsidis, to name a few that Guerrero has beaten. What I think Kenny and many like him really want is to see Mayweather fight more like Marciano than Whitaker. An absurd request, one lacking in appreciation of what Mayweather offers, fight after fight, to the annals of boxing history.

Fighters with otherworldly skill sometimes, when we’re lucky, show us truth, what is actually available or possible within the chaos that exists between the ropes and the ringing of the bell. These fighters are best appreciated holistically. When looked at this way, we see that Mayweather’s dedication to the sport, his defensive style that has helped him avoid hard hits over his 17-year career, and his sense of pride over his unblemished record don’t let him age in the way that normal boxers seem to. In this context we also allow ourselves to realize that despite criticism of Mayweather’s KO record since his time as a featherweight, Mayweather’s overall career, his hit percentage, his plus/minus ratio, and performances like Saturday night, he offers the admirers of “the sweet science” the greatest boxing we’ve seen in a generation.

9 Replies to “May Day: The Return Of The King, Floyd Mayweather”