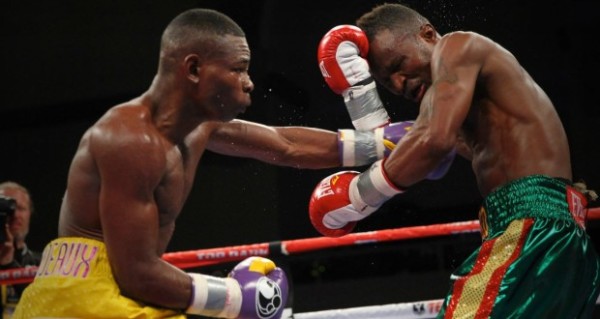 I can’t recall a night of boxing that more starkly showed the difference between the sweet and the bitter of the fight game than Saturday’s “Boxing After Dark” on HBO.

At its purest and most technical, the sweet science is the art of hitting and not getting hit. At the opposite end of the sport, where grit and heart are the only currency, the headfirst, take-one-to-give-one mentality was born. It isn’t often that the fans get to see archetypes of each style fight back to back, so close you wonder if you’re watching the same sport, so close that you can’t help but want to see what happens when the two archetypes meet each other.

On Saturday night, Guillermo Rigondeaux, perhaps the greatest amateur boxer to ever live, came on to defend his title right after James “The Mandingo Warrior” Kirkland — a man who has yet to be in a war where he didn’t feel at home.

For 12 rounds, Rigondeaux showed a level of boxing craft that is seldom seen, and even less often appreciated, on American shores. The two-time Olympic Gold Medalist used his Cuban-style of counter-punching and fast hands to win every minute of every round of his title defense. Rigondeaux’s accuracy and punching power stifled his opponent from Ghana, Joseph "King Kong" Agbeko — who often fought as if he’d forgotten how to throw a punch, keeping his punch output to single digits in some rounds.

The entire tenor of the fight was worlds away from what Kirkland and his then-undefeated foe, Glen Tapia, brought to Boardwalk Hall, New Jersey, earlier that night. In the opening moments after the bell, Tapia came out swinging hard and with his first combination nearly sent Kirkland to the canvass. But the young rising star didn’t punch himself out trying to chase the knockout — a decision he likely now regrets.

Kirkland, reunited with his trainer Anne Wolfe — one of the greatest female fighters to ever live — needed the first round to wake up. The brewing war that started in the first round was nothing new to Kirkland. It’s in dogfights like that where Wolfe’s uniquely intense training truly comes into play.

Only halfway through the second round, the pro-Tapia crowd must have sensed danger for their fighter. Kirkland started landing the thudding blows he’s known for, tightened his defense just slightly and turned on the relentless pressure that Wolfe has cultivated. After another round, it was clear to everyone except the Tapia die-hards how the fight would end.

The young rising star was folding and taking serious punishment. Having seen that, in between rounds, Wolfe shouted at Kirkland, “You took his nuts. Now you have to take his heart.” Kirkland’s second corner man followed up, “Take his whole soul.” That is the sort of harsh refrain that plays over and again in the bitter side of boxing. Two rounds later, the referee mercifully stopped the fight, but not before Kirkland delivered a left hook so hard that it knocked out Tapia, who stayed on his feet only with the help of the referee, who held him upright and kissed him the way a mother would a sick child.

That is the sort of fight that craftsmen like Rigondeaux disdain. In interviews before the his title defense, Rigondeaux said as much, calling the Mexican-style of getting hit to throw some of your own leather just crazy. And if you can do what Rigondeaux can do, it might be. But Rigondeaux fought nearly 500 amateur fights and only lost five. Clearly, few can do what he can.

Unless modern-day boxing fans change overnight, however, Rigondeaux’s not likely to get the bigger payday he wants with his fighting style. The best he can hope for is that his promoter is willing to pit him against action stars like Leo Santa Cruz. More than likely, Rigondeaux won’t find real competition unless he’s willing to move up in weight. At 126 and 130 pounds, there are definitely challenges for the master boxer, including another two-time Olympic Gold Medalist, Vasyl Lomachenko, hard-hitting Jhonny Gonzalez, Evgeny “The Mexican Russian” Gradovich and, of course, Mikey Garcia.

With Saturday’s knockout performance under his belt, Kirkland is a safe bet to get another big fight. But he’s got to win a couple more before his name is likely in the conversation to fight the cash cow of the division, Canelo Alvarez. Should Kirkland manage to keep winning, his style is something that could be appreciated by Canelo’s Mexican fan base and can test the young Mexican star in a very different way than Mayweather could.

Let's just hope that Kirkland has found a way to stay out of trouble outside of the ring, a task that has proved to be his most difficult fight ever.