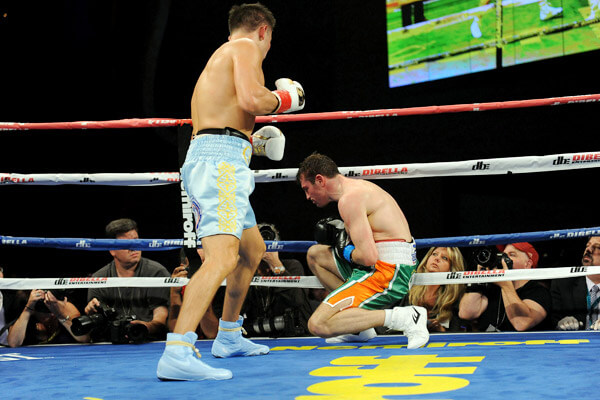 On Saturday night, HBO Boxing came back with a vengeance. In a card that had great potential on paper, every fighter showed he was worth the airtime. But none made a statement as emphatically as Gennady Gennadyevich Golovkin, otherwise known as GGG. On Saturday, the 31-year-old Kazakh fighter showed the doubters that he’s got the goods.

For months now, I’ve been excited about the tools and results GGG has displayed in the squared circle. His combination of vicious punching power and aggression has made him a fun fighter to watch, but a look through his decorated amateur record and increasing displays of boxing technique has given hints to careful observers of how good GGG really is.

When people compare your punching power to Iron Mike Tyson, it's hard not to get pigeonholed as a one-trick pony. But if Earnie “The Black Destroyer” Shavers can be beaten — a man many consider the hardest puncher to ever put on a pair of gloves, a man that Muhammad Ali said punched him so hard that “my ancestors back in Africa felt [it]” — then any hard hitter can be beaten. That is if that’s all the fighter brings to the table.

That was largely the question that was being asked of GGG on Saturday night. Could this hard hitter handle Matthew Macklin — someone who’d essentially only lost to the lineal middleweight champion and pound-for-pound standout, Sergio “La Maravilla” Martinez? Macklin, no slouch in the punching-power department himself, had displayed great boxing skill and determination in his fight against Martinez and led every judge’s scorecard going into the second half of the fight. Could GGG handle the type of craft that Macklin displayed against Martinez?

Not only did GGG show that he could handle Macklin, he absolutely demolished him. At no point was Macklin in the fight. The pressure GGG showed from the first sounding of the bell was shocking, almost as much as it was to watch Macklin’s face quickly turn tomato red after getting hit with the first punch thrown at him. But unlike GGG’s recent outing again Gabriel Rosado, where GGG pulverized Rosado’s face into a horrendously bloody mass, GGG ended the night against Macklin with a single hellacious liver punch that is one of the hardest in recent memory. Five minutes after he’d been counted out, Macklin was still on the floor!

The power is intoxicating as a viewer. You get lured in to craving only the knockout. You forget that the subtle feints, the shifts in body movement and footwork all play an enormous role in producing the spectacular endings we all like to see. GGG’s 340-plus amateur wins provide him with the technique to set up KOs, instead of trying to force them. This is a man that has amateur wins on the likes of Andy Lee, Andre Dirrell and Lucien Bute. He’s an aggressive fighter with real boxing IQ.

After Saturday night’s performance, it's clear that the torch of the greatest middleweight has passed on from Martinez to GGG. I’ve enjoyed watching Martinez put it on the line for the past several years, fighting outside of his natural weight and bringing bigger men to task. But with recurring knee injuries and back-to-back broken hands, the Argentine fighter is clearly past his prime. He was lucky to keep his belt against Martin Murray after their fight back in April. It’s precisely because of these injuries, and the short time left for Martinez in the ring, that I don’t think we’ll ever get to see Martinez pass the torch to GGG in the way we all want to see, in a fight.

Who is brave enough to give GGG a shot at a belt? Remember that GGG has an open invitation to anyone from 154 pounds to 168 pounds (super-welterweight to super-middleweight). So which belt holder with some cash will step up to the plate? Andre Ward? Canelo Alvarez? Floyd Mayweather? Right now, none of them. Each is engaged in immediate fights or showdowns with his promoter.

Whoever is brave enough to step in the ring against GGG (likely this November, those in the know are saying) gets my respect. Anyone willing to face GGG after Saturday is a brave man indeed. That man is living up to the credo that GGG recently announced and might be one of the best I’ve heard from a fighter in a very long time:

Courage is the responsibility of every fighter – GGG

When you step in the ring against GGG, the weight of responsibility is never greater.