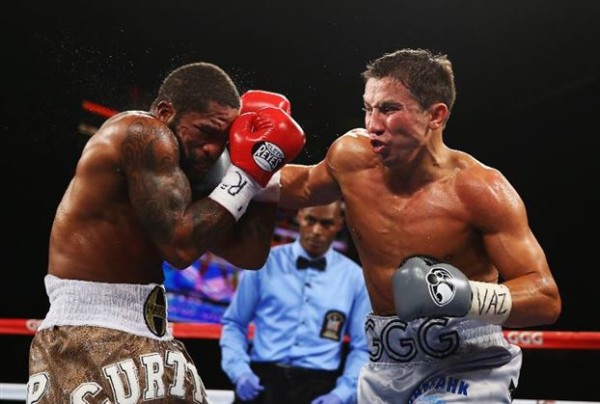 Only truth can be found inside of a boxing ring. Outside it, before the hot lights of fight night get turned on, when fighters posture and boast, and promoters hand out promises as cheap and short-lived as any politician’s, it feels like there’s only room for lies. But when the media turns off its cameras and tape recorders, after the referee has issued his final instructions, and fighters have delivered the last glances of mental warfare, all that remains are the fighters themselves — what they’ve actually built themselves to be and what they’re willing to endure. On Saturday night, HBO boxing presented Gennady Golovkin’s (“GGG”) fourth defense of his championship belt this year and another opportunity for GGG to convince the boxing world that he is truly the greatest middleweight on the planet. After Saturday night’s performance, however, GGG has shown that he’s not just the best middleweight around, but also has the tools to become the greatest fighter on the planet.

Let’s put Saturday night in perspective. GGG was supposed to win. Most even expected the he’d add another knockout to his already impressive record. The question was whether he, as the smaller man, could take the punch of Curtis Stevens, a former light heavyweight known as a knockout artist (and even dubbed the “Chin Checker”). There were also those who wondered if Stevens’ excessive trash talk had gotten to GGG — that GGG might turn the night into a street fight as he wanted but end up on the canvass in the process.

This year GGG showed that he has one-punch knockout power, great defense and that his ability to cut off the ring is paired well with a killer instinct that is quickly building his fan base. Because of this powerful combination of skills, however, we haven’t seen how GGG handles a big shot from a heavy-handed puncher.

Curtis Stevens was supposed to change that. Toward the end of the second round, it didn’t look like he would get the chance. After a brutal double left hook combination, Stevens hit the canvass hard, showing the world one of the most comical expressions of shock, awe and confusion (GGG’s punches seem to bring that out of people) in recent memory.

To his credit, Stevens survived the round. After three minutes in survival mode, Stevens strung together some powerful combinations that landed flush on GGG, punches that likely would have meant a great deal against other fighters. But GGG is not other fighters. He walked through the best Stevens had to offer and also carefully backed away when necessary. Even at Stevens’ best moments, GGG still seemed in total control of the fight.

Watching GGG work from the sixth round on felt like watching a lion stalking its prey. Stevens tried his best to use the ring to hide and evade, but GGG matched him stride for stride, and when he pinned him to the rope would unleash a barrage of punches that had many on Twitter, and other social media, asking that the fight be stopped.

After surviving another 30 seconds of harsh punishment against the ropes toward the end of the 8th round, the referee stepped in and stopped the fight before Stevens was subjected to another round of damage.

Golovkin’s ability to take the unquestionably hard punches Stevens mustered up in the first half of the fight, along with Golovkin’s superb foot movement and unequaled power in the middle-weight division, should leave little doubt who’s the man at 160 lbs.

The Sergio Martinez that beat down Kelly Pavlik in 2010 is long gone. The Martinez fighting today was lucky to come away with a win in his hometown against Martin Murray earlier this year. He’s slower, riddled with injuries and is known to hit the canvas with some regularity. With a calculating killer like GGG on his heels, however, he isn’t likely to get the opportunity to get back up. Martinez earned his place atop the division, and now he’ll likely fight Cotto before he'll give GGG a shot at his crown.

So who will realistically be the next man to step in the ring against GGG? It won’t be Canelo Alvarez, who fights on Showtime and whose handlers will NEVER put him in that type of danger. Alvarez is one of the best draws in boxing. A beating at the hands of GGG would undoubtedly stain his brand, although it might also raise his stock amongst hardcore fight fans. Mayweather? Not going to happen for many of the same reasons.  Andre Ward? He’s on the right side of the premium network dual, but he’s interested in a big-money fight with Julio Cesar Chavez Jr. — a completely undeserving opponent who might nonetheless make an entertaining fight, while it lasts.

The only champion I see stepping up to the GGG challenge is Peter “Kid Chocolate” Quillin. Despite his title he still seems hungry for bigger and better things. He also legitimately seems to be chasing greatness alongside bigger paydays. A unification bout between these two would go a long way for the victor in making a super fight down the road. Sadly for the affable Quillin, his speed hasn’t stopped lesser fighters from landing a surprising amount of big power punches, and given that major flaw alone, if he meets GGG in the ring, my money is on GGG continuing his exciting undefeated streak.