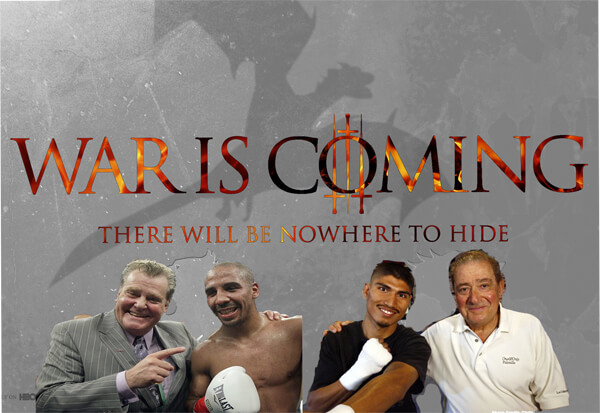 Often, a fighter needs more than a clever matchmaker to sit on one of the thrones in boxing. Sometimes he needs a good lawyer, a gutsy and aggressive champion—a Daario Naharis, a Jaquen H’ghar, or a Hound—to help break free of a greedy promoter or manager. But bringing in a lawyer is expensive, which means that fighters have to be willing to dig deep into their pockets to pay for their advocates, and to survive long periods of inactivity while the courts decide their futures. It’s a dangerous play--one that some fighters make after more careful consideration than others.

Andre Ward could have benefitted from a bit more thought leading up to his decision to sue longtime promoter Dan Goosen. Back in December, shortly after the suit was announced, Ward was sure he’d be fighting again by March or April of this year. Now, well past the ides of March and May fast approaching, it’s clear that Ward’s prediction was far off. He, and especially his team, should have known better.

Ward has twice tried to break away from his promoter, and twice his attempts have been thwarted. The practical result has been two years of minimal activity in the ring. Ward fought only once in both 2012 and 2013. In that time he could have made much more money and built upon his legacy, which he so often claims to value to the utmost.

Logic would say that if he’s trying to break away from Goosen it’s because he’s been wronged, damaged, and most obviously, has a better deal ahead of him if the break is successful. But logic is largely missing here.

Under Goosen, Ward went from being a relatively unknown Olympic Gold Medalist to the winner of Showtime’s Super 6 tournament, the undisputed Super Middleweight champion, number two on the pound-for-pound list, and upped his fight purses to around a million dollars a fight! And in the near future, assuming Ward was willing to take the risk, Ward was set to receive even bigger paydays against Sergey Kovalev, Julio Cesar Chavez Jr., and Gennady Golovkin. Until recently, Adonis Stevenson was also a real possibility, but then he made the switch over to Showtime in his own quest for the money throne.

So where does Ward go if he wins his lawsuit (which is by no means guaranteed, or even likely)? It certainly won’t be Top Rank. They’re also an HBO-affiliated promoter and the options that were open to Ward with Goosen are the exact same that Top Rank could likely offer. Maybe Top Rank would give Ward higher purses, but it likely won’t make up for the various expenses he’s going to incur because of the lawsuit.

The only credible move for Ward is Golden Boy, who’s associated with Showtime. While Showtime rewarded Adonis Stevenson with a career-high payday when he made the move from HBO, there isn’t any guarantee that they would shower the same adulation onto Ward. Even if they did, it might not make up for the lost announcing fees Ward receives for his commentary on HBO—you can be damn sure HBO wouldn’t keep him on the announcers’ payroll if he left to fight for Showtime!

At Showtime, however, outside of a fight with Stevenson the options aren’t better than what HBO offers. By the time Ward is clear of the courts and able to fight on Showtime, he would only likely be able to fight the winner of Stevenson-Hopkins (which will get made), and not both.

Boxing can be a tangled web, and as fighters try to climb to the top of the many thrones of the sweet science, they can sometimes get caught up in that jumbled mess. Ward seems to have done just that—opting to leave a promoter who has done right by him time and again, in exchange, at best, for an uncertain payday and a likely stretch of inactivity that will hurt his pocketbook and his legacy.

Where Ward’s claims seem out of nowhere, those of Mikey Garcia are much more understandable. That isn’t a judgment call on the merit of his legal claims, but rather an evaluation of the business behind the legalese.

Garcia has asserted that promotional giant, Top Rank, violated the Muhammad Ali Boxing Reform Act by acting as both promoter and manager, and violated various other California codes by extending his contract beyond a maximum five-year period set by statutory code. Let's be real. Garcia wouldn’t be looking to break his contract unless he felt he wasn’t getting his due. The contract could violate every statutory code in California, but if it meant he was banking Floyd Mayweather-type money for every fight ($30 million or more), he would probably find a way to live with any technical violation of his rights.

The rub here is that Garcia is rising star with fantastic skills, growing appeal, and has little to no good prospects left at Top Rank. A Terrance Crawford matchup isn't exciting, a Felix Verdejo bout is premature and not lucrative. Fights against stablemates Nonito Donaire and Evgeny Gradovich, although appealing, are unlikely because of they’re all trained by Robert Garcia. Only a few months ago Bob Arum touted Garcia as a future opponent for Manny Pacquiao. With Arum's more recent comments about the possibility of matching Pacquiao with Floyd Mayweather, or the winner of Marquez v. Alvarado, Arum’s earlier statements now seem quite empty.

Across the way, at Golden Boy however, there are very promising fights that are open to Garcia (e.g. Ponce De Leon, Adrien Broner, Danny Garcia, Lucas Matthysse). And if he signed on with Al Haymon, then Garcia at least gets entered into the conversation about the Mayweather sweepstakes.

Not only are there more options for Garcia if his lawsuit is successful than for Ward, but at 26, Garcia can more easily make up for a layoff than the 30-year-old Ward, who’s already reduced his activity level to a sloth’s pace.

Both Ward and Garcia have cast their dies on the throw board and selected their champions for battle. It’s true, valar dohaeris, but whom a boxer serves and for how long can often determine whether that boxer ends up a pauper king like Winky Wright (who’s business decisions may be the worst in recent boxing history), or Oscar De La Hoya, who not only prevailed in court against promoter Top Rank, but turned his separation into today’s largest boxing empire, Golden Boy Promotions. The war for their future is here. Who will you side with? Ward or Goosen? Garcia or Arum?

2 Replies to “Game Of Thrones: Boxing Edition, Volume Two – On Top Rank, Golden Boy And The Road Ahead”