Boxing is different when you’re sitting ringside. The arena is colder than you’d probably expect.  The chill in the air helps the audience, especially those close enough to hear the punches, actually feel the thudding of leather on flesh. The visceral difference between watching the fight from your living room and watching in person is as stark as watching a hockey game on your television and going to the icy hockey rink where you can feel the hits echo in the cold air. In hockey, however, the biggest hits often come alongside the walls, leaving you wondering whether a man falls to the power of another or the unforgiving rigidity of the walls themselves.

On Saturday night, at the Barclays Center in Brooklyn, New York, I sat only a few rows removed from the action, and there was no question that when one man fell, it was due to the force of will of another and nothing else. It’s just too bad that the great knockouts of the night were untelevised and that for what most people saw on Showtime, the expectations of the fights drastically distorted what many felt they got.

Before I break down the fights that everyone tuned in for, Adrien Broner vs. Paulie Malignaggi and Seth Mitchell vs. Johnathon Banks, I have to give a quick shout-out to two fighters on the untelevised undercard whom you should pay attention to.

Now, on to the big boys. 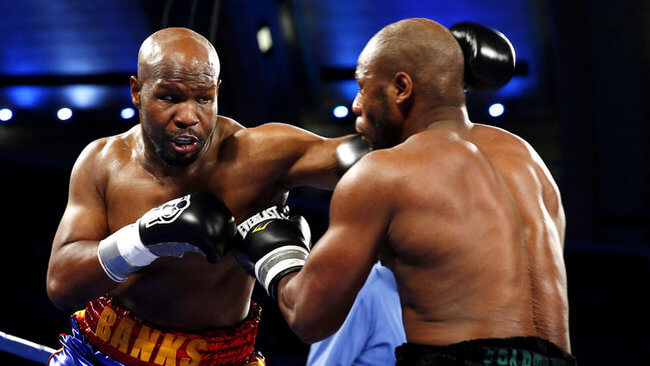 Based on Saturday night’s performances, the idea that Mitchell or Banks deserves to share a ring with either Klitschko brother is absurd. To be honest, that was true a year ago, before these two men met in the ring for the first time. But Banks’ shocking upset victory over Mitchell and the fact that Banks had recently suffered the death of his father-like figure/trainer Emanuel Steward while training Wladimir Klitschko for a title defense created a narrative so enticing that it was hard not to believe that Banks might actually have the goods. It was that hope, that expectation that made the heavyweight fight on Saturday so miserably disappointing.

American heavyweights haven’t been elite in a long time. The last two American hopefuls that stepped in a ring against a Klitschko brother were resoundingly defeated, without ever really posing any danger to the champions. Their performances should have lowered my expectations for the Mitchell-Banks affair. I should have expected at best a slugfest and not the technical and physical prowess needed to ascend to the championship crown. I should have, but didn’t.

Instead, I expected the world and got nothing in return. The worst thing that happened was that Johnathon Banks committed the cardinal sin of boxing — he didn’t fight. For most of the 12 rounds he was a glorified punching bag, one that moved enough out of the way to keep the fight boring. As I sat in awe of the anti-fight I was watching, I started to think about what heavyweight match-up contrasted most starkly with what was going on in front of me. Then it hit me — a heavyweight championship bout that occurred nearly 100 years ago to the day between Jack Dempsey and Jess Willard (the man who took the crown from the first black heavyweight champion, Jack Jackson).

Where Mitchell-Banks was slow, long and subdued, Dempsey-Willard was short, fast and brutal. After three rounds, Dempsey had broken the champion’s jaw, split his cheekbone, smashed his nose, battered his eyes shut and broken six of his teeth off at the gum! After 12 rounds I wasn’t sure Mitchell or Banks had broken a sweat.

Mitchell ultimately won his revenge, but in name only. It will be hard to convince anyone to set aside their Saturday night plans in order to watch him in his next outing. 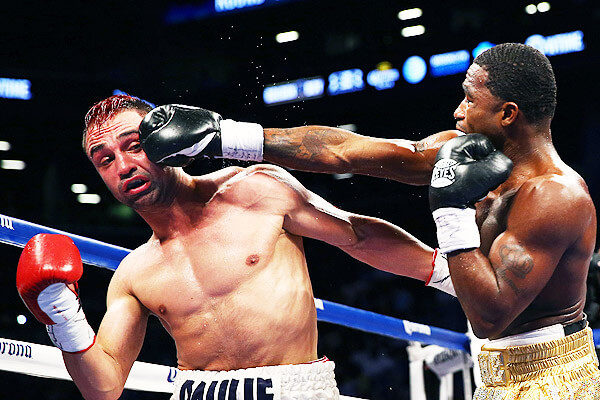 The media reactions to this fight have seemingly reflected the divided scorecards the judges handed in. Two judges had the fight 115-113, one having it in favor of Broner and the other in favor of Malignaggi. The last judge scored it, in my opinion, much closer to reality, 117-111, in favor of Broner. The disappointment many at ringside and in the media have felt seems to be the result of broken expectations. They expected the former lightweight to come up to welterweight and knock Malignaggi out. They hoped that his performance would best what Amir Khan and Miguel Cotto had been able to do against Malignaggi. Their expectations have distorted reality. Their wants have denied them the enjoyment of what they got.

Despite landing hard power punches that routinely snapped back Malignaggi’s neck, Broner didn’t display the type of power that Cotto did when he broke Malignaggi’s jaw. Then again, Cotto never fought below 140 pounds, and Broner was until very recently a 130-pound fighter. Similarly, despite his lightening speed, Broner didn’t seem to capitalize on several opportunities to finish Malignaggi when he was hurt — in 2010, Amir Khan did much better. Khan’s face, however, showed that he often was hit flush — not to mention that his greater success was in part the result of his habit of throwing caution to the wind, which has cost him dearly on more than one occasion. (See his fight with Danny Garcia if you need reminding.) Broner left the ring with essentially no bruising because his expert display of the shoulder-roll, most recently made famous by Floyd Mayweather, protected him from most power punches Malignaggi threw. From ringside it was quite clear that Malignaggi’s volume punching seldom landed anywhere other than Broner’s forearms and lead shoulder.

In obsessively comparing Broner to the men that have beaten Malignaggi before, many have lost sight of the brilliant performance Broner gave. Didn’t anyone notice that Broner found a way through most of the fight, especially in the first half, to walk down Malignaggi and cut off the ring often without throwing any punches? Not many fighters can do that sort of thing! Did you see how when it came to hand speed, Malignaggi, who many accurately consider one of the fastest in the business, couldn’t keep up? And what about Broner’s masterful counter punching? In the seventh round especially, Broner’s back-to-back counter uppercuts were two of best, hardest and fastest counters I’ve seen this year.

Would it have been nice to see all the trash talking end in a knockout? Of course. Did I hope Broner could outdo Cotto and Khan? Yes, I did. But even though neither of those things happened, I enjoyed the fight thoroughly. I saw a young, flashy fighter show he has substance. I saw a lightweight jump two weight classes and not only win, but beat a reigning champion. That’s better than Sugar Shane Mosley did 1999 when he made his debut at welterweight.

Don’t obsess over what you didn’t get, and more importantly, don’t let that trick you into thinking for a second that Broner isn’t something special. I hear Marcos Maidana wants a piece of Broner. If that fight happens — and I hope dearly that it does — there’s no way the slow-punching and slow-moving Argentine lands the bombs he did against Josesito Lopez. You can hope for it, and if you don’t like Broner, you can pray for it, but the expectation of a knockout will ruin your night. Broner will pick him apart.

3 Replies to “Distorted Expectations: The Highs And Lows Of Broner-Malignaggi, Mitchell-Banks”