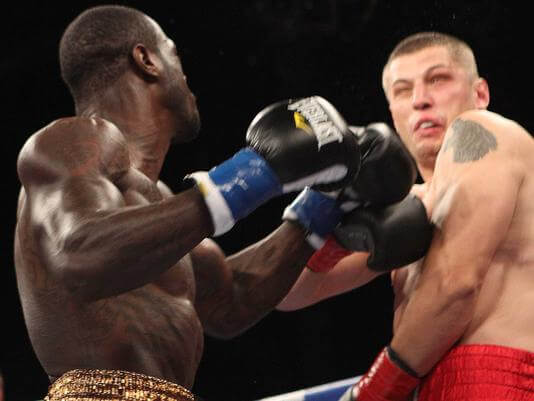 Last week, heavyweight prospect Deontay Wilder was pitted against Siarhei Liakhovich in the hope of finding out exactly what kind of fighter Wilder really is — and to answer the question in heavyweight boxing: How close is Wilder to a shot at a Klitschko brother?

Liakhovich isn't a top 10 contender. He's lost five of his last seven fights. But the man has one unique statistic: He's never been knocked down before the ninth round. He's what boxing guys call "durable." Durable isn't exactly a compliment. It's usually attached to the names of forgotten fighters — the guys who's names only live on as the stepping stones of more winning and marketable pugilists. These guys might not be famous, but they're necessary.

On the road to a world title, a fighter needs time to develop. In today's boxing market, where a single loss can derail a boxer's shot at a big-money fight, opponents have to be selected carefully. So far Wilder has faced a lot of nobodies. But so have a lot of American heavyweight prospects. The difference is that Wilder has knocked out all of his 28 opponents. Liakhovich was brought in to see if all those knockouts were a fluke. He was supposed to bring Wilder into deep waters to see how the rising star would fare.

So how did Wilder do?

Knockout of the year candidate. Check out the fight; it's less than two minutes long.

The punch that put Liakhovich down wasn't the crisp, picture-perfect kind that looks good on a highlight reel. But Liakhovich's reaction on the floor, however, will be playing on ESPN highlights for a while. In fact, it was downright scary. Liakhovich seemed to convulse on the floor with the fear of getting hit again.

Is Wilder ready for a Klitchko? No. His footwork could be better. He was a little off-balance even in the short minute of the fight, and with only about 42 rounds of professional boxing under his belt, he lacks the experience to take on a Klitchko. But his hands are fast, and his reach does give him the hope of being able to trade jabs with either Ukrainian champion. Most encouraging of all is thinking about what would happen if Wilder’s ugly punch was a crisp one, and what if that landed on a Klitchko’s chin? That might be a lot of ifs, but in boxing, when it's the heavyweights you're talking about, and you've got a heavy-handed hitter like Wilder, the ifs have a way if making everything that much more exciting.