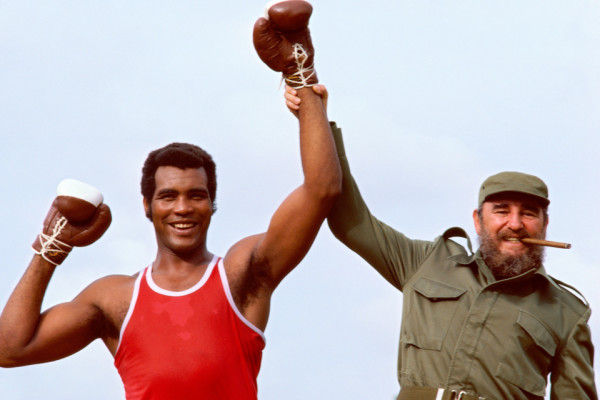 Fidel Castro created the greatest amateur boxing training system the world has ever seen. Known as “La Finca,” the dilapidated boxing schools on Cuba have trained from early childhood some of the best boxers ever to step into a ring.

Unfortunately, because Castro banned professional sports shortly after coming to power — he called the pro ranks a capitalistic exploitation of man — the boxing world has long been denied the pleasure of watching the slick Cuban boxers at the pro level.

With spectacular recent performances from fighters like Guillermo Rigondeaux and Yuriorkis Gamboa, even casual fans these days are beginning to acknowledge how well-trained the Cuban lightweights are. But what they don't realize is that unlike most other Latin American countries, Cuba has produced some of the greatest heavyweights of all time. On the undercard of Golovkin vs. Stevens, the boxing world was given a glimpse at what one average (by comparison to the great below) Cuban big man could do and in the process reminded many about some of the biggest “what-ifs” in boxing.

Mike “Irish” Perez defected from Cuba in December 2007 and since has earned a perfect 19-0 record with 12 knockouts. HBO pitted him against hard-punching Magomed Abdusalamov, who has taken out each of his 18 opponents before the final bell. For all the talk about Abdusalamov’s menacing power, the story of the fight was the surprising speed of Perez, his technical flare and his own heavy-handedness.

Early into the fight Abdusalamov complained that Perez had broken his nose and repeatedly mentioned pain in his face, which quickly started to swell and bleed. The fight was easily the most enjoyable heavyweight match-up this year because it offered a little something for everyone. In the heavyweight ranks these days, fights tend to fall into two categories. In the first there are slug fests and beat downs devoid of much boxing craft. Although enjoyable to some, it’s often hard for fight fans to not state the obvious: These big men would be decimated by the technicians of the '70s, '80s and '90s. In the other category of heavyweight fights, you’ve got men like Wladimir Klitschko, who offer fans refined technique devoid of any risk or excitement. These men seem to have sterilized a sport that is inherently dramatic.

Perez vs. Abdusalamov brought technique together with will and maintained an aggressive pace that has been largely absent from the heavyweight division. As Perez used his clearly superior boxing skills learned at La Finca to dissect his opponent, boxing fans were reminded that unlike other Latin American boxing nations, like Mexico or Puerto Rico, Cuba has had heavyweights that could have not only won a world title, but could have redefined the very history of the weight class. Had it not been for Castro and the revolution, here are two Cubans, and the match-ups that never were, that could have rewritten boxing history.

Only two athletes in history have been as beloved and adored by their countrymen as Stevenson was amongst the Cubans — Julio Cesar Chavez and Manny Pacquiao. The fact that the only apt comparisons are also boxers says a lot about the sport and the role it has historically played in the psyche of nations — but that will have be to be a topic for another day.

Stevenson won three Olympic Gold Medals (’72, ’76, ’80) and would have won a fourth had it not been for the Soviet boycott of the 1984 Olympics. Stevenson flattened the ’84 Olympic Super Heavyweight champion, Tyrell Biggs, twice. Biggs just wasn’t in his league — maybe no one was.

In 1976, after Stevenson won his second gold medal, he was offered $5 million to turn pro and challenge Muhammad Ali for the title. Remember that Ali had knocked out George Foreman in one of the most memorable and shocking fights in heavyweight history only two years earlier. At the time, Stevenson was still riding out what would be an 11-year unbeaten streak. He responded to his would-be promoters:

“What is one million dollars compared to the love of eight million Cubans?"

He could not, or would not, be bought. That sort of resolve is unique in sports history. It also denied the world the greatest heavyweight match ever.

A lot of what made Ali special, his unique foot movement, was very Cuban. Ali told countless reporters that he admired and tried to mimic Sugar Ray Robinson’s smooth footwork, but it was Luis Rodriguez, a Cuban exile working out at the 5th Street Gym along side Ali, that day in and day out shared the secrets of his superlative footwork. Rodriguez was one of many Cubans greats that came to train at Angelo Dundee’s gym in Miami after Castro banned professional boxing. These fighters dubbed Ali, “Boca grande,” big mouth, and treated him as one of their own.

Ali, may have been “The Greatest,” but he was also the smaller man — two inches shorter Stevenson, about 10-15 pounds lighter, and had a reach disadvantage. What’s worse is that in 1976, Ali had unfortunately learned that he could take a punch and absorbed punishment more willingly than he had ever done before his three-year hiatus from the sport. Stevenson had a well-known and well-feared murderous right hand that routinely knocked out the best amateur boxers with 16-ounce gloves. Could Ali withstand Stevenson’s power? Did Stevenson have the gas to go 15 rounds after spending a career fighting only three rounds or less? We’ll never know.

If there was a heavyweight boxer more prolific than Stevenson, it would be his countryman, Felix Savon, who won three Olympic Gold Medals of his own (in ‘92, ’96 and 2000, missing the fourth because of the 1988 boycott). He also won six World Amateur Championships, three Pan American Games and four Central American Games.

His long list of accolades and victories against heavyweights like Lamon Brewster, David Tua and Shannon Briggs led to a rumored $25 million offer from Don King to fight Iron Mike Tyson. Savon’s right hand was almost as feared as Stevenson’s. His work ethic was ferocious, and his ability to tame come-forward fighters was well-known. The durable David Tua, who never lost by knockout and gave Lennox Lewis trouble in their 12-round fight, couldn’t finish the first round with Savon — even with 16 ounce gloves and headgear.

But would that have been enough to survive Iron Mike at his peak? Some say Savon’s chin was his greatest weakness, but it was seldom was tested because of his own great offense and quick foot movement. Maybe Tyson could have highlighted that flaw. It’s a question for the ages.

As the revolutionary Cuban leaders of yesteryear fade away, it is only a matter of time before the small Caribbean nation once again embraces professional boxing. It’s a cruel irony that the return of pro boxing is likely to destroy the amateur system that has made Cuba so special in the amateur boxing world. Regardless of what happens in the future, we’ll always have yesterday, and for as long as the sweet science endures we’ll have debates about who was the better heavyweight, Ali or Stevenson, Tyson or Savon. Maybe it’s better that way. Some questions are sweeter left unanswered.

2 Replies to “Cuban Boxing And The Great What-Ifs”