How many of you are already bored of this whole Mayweather vs. Pacquiao talk? I know I am, but yet, here I am writing about it, and here you are here reading about it. We can't deny that this bout intrigues us to the fullest and that perhaps we only have ourselves to blame for thirsting so much for a fight that really should have taken place years ago, thus, making the matchup itself almost pointless and, dare I say, overhyped? But I know you're all going to pay $60 bills to see it, and I know my ass is gonna pay $60 bills to see it, so why pretend we're not interested? It's not like MMA has anything interesting going on these days. (That's a completely separate discussion.)

It was a fresh 66 degrees in Las Vegas yesterday, my friend bragged about it, perfect weather to have one's license reinstated. Floyd Mayweather rolled up to the Grant Sawyer State Building in his white Charger SRT for his license hearing. As y'all already know, Floyd was originally set to start his jail sentence January 6th but was able to push that date back to June 1st, so he could fight in May. All that remained was the permission to do so in Las Vegas and, of course, the name of the opponent. The session was about an hour long, and most of the questions the commission had for Floyd were about his criminal case. Las Vegas playing the part of attempting to protect the integrity of the sport with Commission Chairman, Raymond Avansino, leading the Mayweather inquiry. Floyd sat at a fold-out table across from the commission made up of six members. The entire hearing seemed informal, to be quite honest, and Floyd wearing street clothes drove home that point even more so. Floyd's eyes looked tired and for the first time, aged.

Nevada State Athletic Commission: "Do you have an opponent for May 5th? Are you ready to reveal that opponent?" 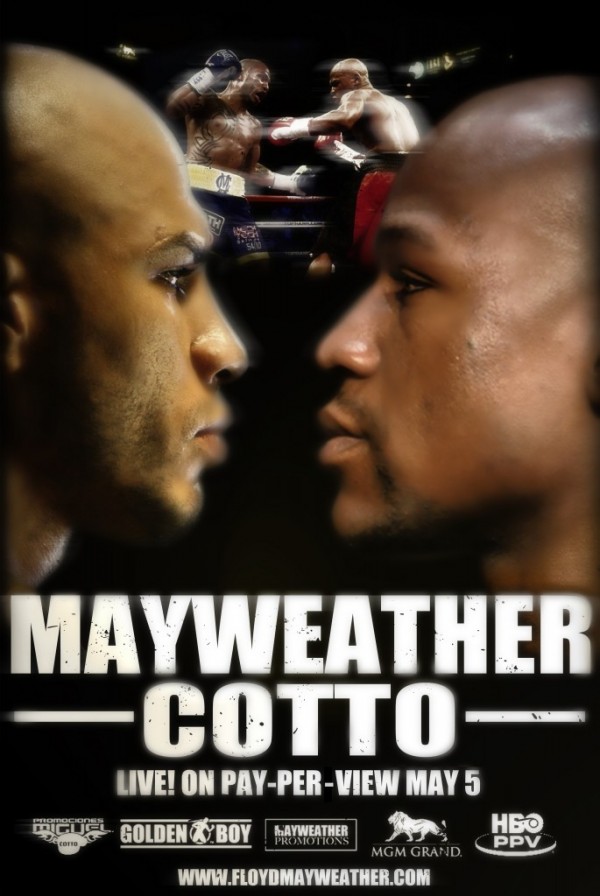 And there it was. May 5th was officially NOT the date Floyd Mayweather and Manny Pacquiao would meet, but most of us in the know already knew that. And that is certainly no reason to scoff at this Mayweather vs. Cotto matchup. Absolutely not. Floyd Mayweather (42-0) and Miguel Cotto (37-2). These are two future Hall of Famers and Cotto is as exciting a fighter as they come. He boxes, he punches, he's got heart. A great opponent for Floyd and despite what many say, has the tools to hand Floyd the first loss of his career. The question is, will he use them? Castillo, De La Hoya, Mosley and Ortiz all had the tools to defeat Floyd Mayweather, but none of them used them fully. Shane was best equipped but absolutely refused to let his hands go. He was scared of the counter more than he really should have been. And Castillo actually beat Floyd, in my opinion, but no way you win a decision against Mayweather.

Then there's Miguel Cotto and Manny Pacquiao. Two names that Mayweather has been accused of ducking in the past. Well, now Cotto is 31 and, finally, Floyd has accepted a fight with him. This now leaves Pacquiao looming. But Floyd is doing 90 days in June and Pacquiao, refusing to wait, is planning a fight during that time. Rumors of a November matchup have started, but so many factors are involved that it's too early to speculate. One thing is certain, though, and it's this: Fans are losing their patience.

What's really preventing this Pacquiao vs. Mayweather showdown? Well, to be honest, the same ol shit: politics, money, power, bad blood and fear. Yes, fear. Many will disagree with me but I am entirely convinced that Floyd Mayweather is flat-out nervous about fighting Manny Pacquiao. Always has been. And why shouldn't he? Manny is fast, powerful, a southpaw and will give Floyd many angles while applying the pressure. We also can't forget the Freddie Roach factor either. So there's no reason for Manny to duck Mayweather. None. And if you recall, Manny openly called out Floyd last November and said he really didn't care about money anymore and offered Floyd the "bigger piece of the pie." Now that he had his wealth, family, and position in congress, he was quite content with life, publicly ridiculing Floyd, but in a manner that most likely went over Floyd's head, who seems to have the exact opposite life of Manny outside the ring.

But perhaps the newest evidence as to who is responsible for stalling this fight comes from Pacquiao's adviser, Michael Koncz. Koncz was given full authority by Manny to negotiate a deal with Floyd and to make this fight happen on May 5th. Normally, Koncz would keep his one-on-one conversations with Floyd away from the public, but Floyd's foolish tweets and dishonest quotes have forced him to expose Floyd for the dodger that he is.

To put it simply: Pacquiao had agreed to Floyd's terms to be blood tested everyday up to the fight with exception of the day of the fight and a revenue split of 45-55, 55 going to the winner of the bout. Floyd refused. And Koncz reminded Floyd that if "You're the best fighter in the world, then no problem you're going to get the extra ten percent." That would include all PPV revenue and everything on the backend. Floyd's guaranteed purse was an estimated $50 million, Manny's would only be around $40 million, an attempt to buyout Pacquiao by Floyd who had no desire to split the revenue with Manny? This is beyond unreasonable and can only be interpreted as an indirect method of DUCKING Manny Pacquiao.

So what Floyd has done here is taken his in-ring tactics of running, bobbing and weaving and used them to evade the possibility of fighting Pacquiao. Think about it: Although the world's Pound For Pound Champion, Manny Pacquiao, is no where near his prime, the guy is getting old and is banged the hell up. Going at it with Marquez THREE times has had to have its effects on his body. He didn't get a mid-career retirement to rest his body like Floyd did. There's a pattern here to Floyd Mayweather. Look at every notable opponent on Floyd's resume; they were either passed their primes or significantly smaller than Floyd. Hand-picked. Mayweather even paid Marquez to come in heavy at their fight. I mean, c'mon. That's garbage.

If Floyd Mayweather was really as great as he claims (better than Sugar Ray Robinson, according to him) then why would he need to stall on Manny Pacquiao and force Manny to take on other bouts to get worn down even more before he accepts a fight with him? That's what's really going on here. Floyd is trying to tip the scales more in his favor here by stalling on Manny. But doesn't that also run the risk of him losing a step, too? No doubt Floyd's fast, the fastest we've seen since Roy Jones and Ali. Zab, in his prime, was fast. And Amir Khan is pretty damn fast, too. But Floyd was/is slightly faster. But everyone loses steam, and Floyd will be no exception. The question is, will he have begun to slow down by the time he and Manny actually meet? How effective will his counter-punching be? Floyd is a defensive genius and a master at the philly shell and shoulder roll. But again, this may all come down to who has deteriorated the fastest and, of course, who has more will.

On May 5th, we have a championship bout on our hands, and it's no tuneup fight, by any means. Miguel Cotto is a warrior, battle-tested and has a great shot at upsetting Floyd Mayweather. He's a smart fighter, but will Floyd's hand speed dismantle his gameplan once he steps in the ring?

Mayweather is already hyping: “I’m going to stand there and box toe-to-toe, use my defense and do what I do best, and that’s get the victory...” we all know damn well that Floyd Mayweather doesn't stand toe-to-toe and fight with anybody, much less a power puncher like Cotto. But we'll see on May 5th. Vegas has Mayweather as the favorite at -550 right now.

Floyd will have to meet with the Nevada Commission again on May 1st to ensure he has kept up with their agreement and avoided anymore arrests. Stay classy, Floyd.

13 Replies to “Cotto Vs. Mayweather: Has Money May Officially Been Exposed?”