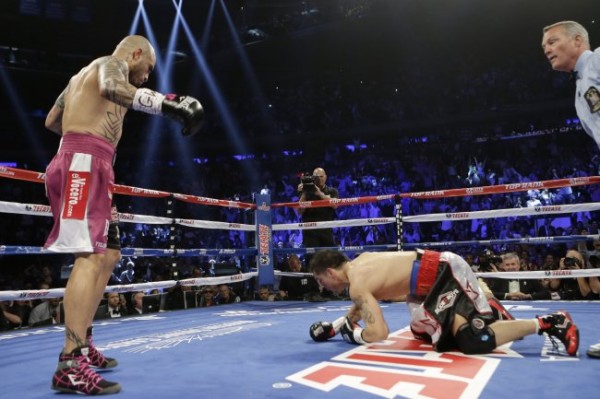 Saturday night delivered boxing fans the most shocking first round of the Sweet Science this year. A supercharged Miguel Cotto came out with the collective power of every Puerto Rican in New York and knocked Sergio Martinez around the ring for the entire first round, giving the champion a taste of the canvas three times. After only the first round, it was clear that Martinez’s body, his knee in particular, would never been able to cope with the Cotto that showed up in Madison Square Garden that night.

Cotto was nothing short of spectacular. He showed up more athletic, aggressive and polished than he has in years. Why? The miracle of a new trainer. Freddie Roach was not only able to help Cotto return to his younger, more assertive self, but he also stamped the Puerto Rican fighter with his patented excellent foot movement and staccato attacks. But maybe more impressive was Cotto’s seemingly unending stamina. His newfound punch output, his increased movement around the ring and his aggression all required a new level of energy that the Cotto who fought Austin Trout two years ago could never have sustained. This Cotto seemed to have taken in water from the fountain of youth.

Despite Cotto’s brilliant execution, anyone who paid close attention saw that he was basically fighting a one-legged boxer. The first knockdown in the fight seemed to tweak Martinez's knee. Twice reconstructed, it didn’t take much to injure, assuming, of course, that it wasn’t already injured before the fight began. In either case, the knee locked up on him, buckled and generally acted as a dead weight throughout the fight.

With an untrustworthy knee, all of Martinez’s best assets were unavailable to him. Here's two examples via GIFs to help prove my point.

Here's the quick-footed lateral movement of Maravilla that dazzled Julio Cesar Chavez Jr. back in September of 2012.

Martinez couldn't plant his feet the way he did to stop Paul Williams with a single blow back in December of 2009. People often forget that true punching power comes from the ground up.

The bum knee also made it difficult to take Cotto’s thunderous blows. Without the flexibility and nimbleness to shift and sway with his feet as he took a punch, Martinez either took punches flush on or lost his balance trying to evade them. As a result, from the first round on, many fight fans likely realized they were watching the swan song of a proud champion and the resurrection of another.

Retirement, if not definitely in the cards for Martinez, is almost assuredly a topic of conversation in his camp. Without the use of his knee, not only is he deprived of the athletic style that won him the middleweight crown in style, but he’s a sitting duck for power punchers. Can you imagine how much worse things could have ended had a brutal puncher like Gennady "GGG" Golovkin (29-0, 26 KO) been in the ring that night? Regardless, even in defeat, Martinez was a class act and offered no excuses, saying:

For Cotto, now the new lineal middleweight champion of the world, the options are plentiful. Because he took little to no damage in the fight, it is conceivable and certainly quite lucrative for him to make a call to Al Haymon and Leonard Ellerbe to line up a rematch with Floyd Mayweather Jr. (46-0, 26 KO).

Cotto’s stock is at an all-time high right now. He’s the third biggest draw in boxing, behind only Mayweather and Manny Pacquiao (56-5-2, 38 KO). And his first fight against Mayweather was very competitive and even prompted Mayweather to reunite with his father to tune up his defensive skills.

Everything about a Mayweather-Cotto rematch makes sense. If Mayweather were to win, it would mean adding a title in a sixth weight class, tying Oscar De La Hoya and Manny Pacquiao. But beating Cotto would also mean adding a fourth lineal title to his collection, which would tie Manny Pacquaio for the most in boxing history. As a promotional free agent, Cotto is perfectly positioned to make this fight a reality. Whether egos and politics create insurmountable hurdles remains to be seen.

If not Mayweather, then the winner of Canelo Alvarez (43-1-1, 31 KO) vs. Erislandy Lara (19-1-2, 12 KO) might also want a shot at the title. This version of Cotto seems to be up to the task of taking on either younger foe. "GGG" is left out of the equation, because there is no way Cotto will get in the ring with the most intimidating champion at 160 lbs. The beast from Kazakhstan is slated to put a nail in Daniel Geale’s (30-2, 16 KO) career on July 26th in Madison Square Garden. It likely wouldn’t take GGG more than a few months to get ready to step in the ring against Cotto, but that is something we will not see at this late stage in Cotto’s career.

But beating either Canelo or Lara would be enough to cement Cotto as a top three all-time Puerto Rican fighter, jumping ahead of Tito Trinidad (42-3, 35 KO). Defeating Canelo, Lara and Golovkin still wouldn’t be enough, however, to jump in front of Wilfredo Gomez (44-3-1, 42 KO) or Wilfredo Benitez (53-8-1, 31 KO).

(Watch the insane knockdown around the 1:35 mark. It looks like a finishing move out of Mortal Kombat.)

Gomez holds one of the best records in all of boxing — he’s the only man to successfully defend his title 17 times all by knockout!

Benitez is the youngest world champion in boxing history (at age 17), the youngest three-division champion (at age 22), and has defeated Hall of Fame greats like Carlos Santos (a fellow Puerto Rican) and all-time great Roberto “Manos de Piedra” Duran (103-16, 70 KO).

Whatever his next steps, Miguel Cotto is a certified future Hall-of-Famer who in the last act of his career continues to stamp his name in the history books and is defying the odds and analysis of critics, pundits and fans, including this one. All respect to the new middleweight champion of the world.