Daniel Jacobs has quietly put together an outstanding resume. Boasting a record of 35-2 by virtue of 29 knockouts is just one accolade. It’s more impressive that Jacobs is the first cancer survivor to win a world title in boxing history. On top of the opportunity to become a linear champion in this bout, there’s an argument that the winner of this middleweight unification can claim the mythical “pound for pound” title of the best fighter in the world. Canelo is undoubtedly the biggest star boxing has today, but here are three reasons you should not sleep on the “Miracle Man.”

Both men bring varied arsenals to what should be an exciting battle. (Sky Sports)

There’s a lot that can be said of the resurgence of Alvarez since suffering his first loss to Floyd Mayweather Jr. back in 2013. Truly learning and growing from defeat, he has succeeded against various styles of fighters from Erislandy Lara, Amir Khan, Miguel Cotto and GGG. But Canelo has never faced a fighter that was the true total package.

Jacobs has legit middleweight size standing at 5’11”, and has a rare blend of speed and power that could present problems. They’re the same problems he caused for GGG in 2017, showcasing an ability to switch stances and not lose a beat. Jacobs will have the weight and reach advantage in the fight. By controlling the distance and staying active, Jacobs can frustrate Alvarez and out-land him all night.

Just as Alvarez learned from Mayweather, the same can be said of Jacobs with Golovkin. A fight that put the middleweight division on notice. Many thought the fight was a lot closer than the unanimous decision insinuated. Jacobs has the honor of being the first fighter to take Golovkin twelve rounds. Knowing this, Saturday’s contest presents a chance for Daniel to make necessary adjustments early on. Looking to score early and often will present the easiest path to victory. Of course a knockout will cure all, however, if this fight goes the distance, the pressure will be on the Nevada State Athletic Commission, which has a knack for controversy when it comes to Alvarez.

Even with the deck seemingly stacked against him, Jacobs has kept a calm demeanor through the entire fight process. There’s a ton of discussion surrounding the rehydration clause and its inclusion in the contract has the potential to compromise Jacobs’ stamina and strength during the fight itself. Yet Jacobs remains unbothered, as he told Fight Hub TV:

“I don’t really feed into anything other than the positive — what I’ve done inside the ring, what I’ve done with preparation, my game plan with my team that we’ve formulated,” Jacobs said. “All the odds, the he say, she say, I keep it to a minimum. I just focus on what the job has to be and that’s to be victorious Saturday night.”

The pressure is on Canelo to perform in the second fight of his lucrative DAZN deal as it’s possibly his toughest middleweight challenge yet. However, the “Miracle Man” himself is no stranger to defying the odds and becoming the world’s best middleweight may very well be his destiny. Win, lose or draw on Saturday night, Daniel Jacobs is already a winner.

by Cedric Welton time to read: 2 min
A Sports Scribe ‘I Am Durán’ Sees An Iconic Fighter A… 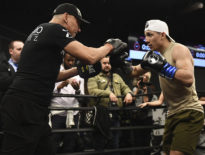 Boxing Too Much, Too Soon? Lopez, Stevenson Highlight Sat…
0