If you pick a fight, you have to be willing and able to hand out a beating. Erislandy Lara went old-school several months ago by calling out Saul “Canelo” Alvarez in the middle of Canelo’s post-fight press conference after his win over Alfredo Angulo.

That night, Lara picked the fight of his life and, because of it, got a career-defining opportunity. But when the fight actually rolled around, Lara forgot that he was the B-side, that he was supposed to be teaching Canelo a lesson, and that he was auditioning for millions of new fans and maybe even a showdown with pound-for-pound champion Floyd Mayweather. In short, Lara fought as if he had little to prove and deserved the benefit of the doubt — a surefire recipe for disappointment.

What Lara delivered on Saturday was an uninspired boxing clinic. After the fight, Lara said:

However, no matter what you thought of the fight, it would be impossible to rank Lara's performance on par with what his countryman, Guillermo Rigondeaux, did against Nonito Donaire. Rigondeaux demonstrated the pinnacle of the Cuban boxing school; Lara only showed a yeoman version of the Cuban style.

Yes, Lara’s lateral movement and fleet-footedness confused and controlled Canelo in the early rounds and some of the later ones. But Lara all too often was not able to convert his superior positioning into offense. In fact, for entire rounds it felt as if Lara forgot to throw punches. What’s worse, for all his movement, Lara couldn’t avoid enough hard shots to stop Canelo from cutting a deep gash over his right eye.

In other words, Lara is at best a knockoff version of Rigondeaux and Mayweather, who are both superlative boxers who don’t get hit anywhere near as much as Lara and find ways to land the lion’s share of the clean and effective punches.

Lara, however, does not seem to recognize that. As a result, he can’t seem to understand the difference between his loss to Canelo and his loss to Paul Williams. It’s really quite simple to understand. Against Williams, Lara landed harder and cleaner than Williams. Lara looked in control, and Williams didn't have any answers.

Against Canelo, Lara’s moments of control were equaled, or even surpassed, by the long minutes he spent running and almost scarred. Moreover, both fighters landed clean punches, and the major damage was felt by Lara in the form of a nasty gash. And when it came time to dig deep, Lara fought like a complacent champion looking for the benefit of the doubt and not an up-and-coming fighter looking to continue to make seven-figure paydays.

Canelo fought with the grit Mexican fans love and reward with loyalty. In the minute before the final round, Chepo Reynoso (Canelo’s trainer) told the younger star, “It’s a close fight.” Canelo came out in the 12th as if he was the B-side of the fight, as if he was trying to win over a whole new swath of boxing fans. He fought for glory and not just a victory.

Had Lara demonstrated even a glimmer of that same will to win down the stretch, the outcry may have been bigger when the scorecards were ultimately read. To be sure, Levi Martinez’s 117-111 score was unconscionable, but think of it this way — if Lara had pressed the action and found a way to win the final round on just Dave Moretti’s scorecard, then that would have changed the split decision in Canelo’s favor into a split draw, which would have likely been palatable to most viewers. 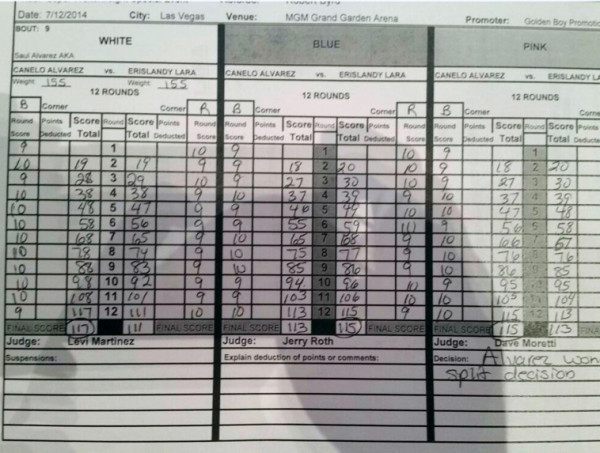 Instead, fans are left debating whether Lara's ring generalship deserved more credit than Canelo's aggression. It's an argument without clear answers and little satisfaction. What fans should be asking themselves is, regardless of the score — which in truth was so close it could have gone either way — who looked hungry? In a fight where no one fighter was teaching the other about the nuances of the sweet science, who looked willing to lay it on the line? Who convinced you that he cared enough about your dollars to fight for your respect? Those are important questions with easy answers in this fight.

The man who did all that, even if he'd lost officially (which he didn't), would come home the people's champion and would still be the biggest A-side in boxing among the new generation of fighters chasing the legacy and bank account of Flory Mayweather.