This past Saturday there was an abundance of boxing on television. Some winners shined brighter than others, and some losers, even in defeat, won more than some winners. Check out who came out on top.

Top of the Class: David Lemieux vs. Hassan N'Dam

Incredible. No one in boxing got more for their money’s worth than those at the Bell Centre in Montreal on Saturday night. David Lemiuex showed why he deserves to be one of the biggest draws in Canada, if not all of boxing. There isn't a dull moment in any of his fights, and there isn't a second he isn't trying to demolish his opponent.

It feels like a lifetime since Lemieux was the cherub-looking boxer trained by Russ Anber. He's brushed off his two back-to-back defeats against Marco Antonio Rubio and Joachim Alcine. Now trained by Marc Ramsay, Lemieux is a certified freight train. No one in boxing today has his unrelenting come-forward style.

The flashy and quick-footed Hassan N'Dam didn't have any real answers to the onslaught Lemieux brought from the opening round until the final bell. He got on his bicycle. he tried to trade. He moved laterally. He pumped his quick, hard jab. None of it was enough. In the end, it was an iron resolve and otherworldly powers of recovery that kept him in the fight after four knockdowns. Of all of the fights on Saturday, none was a better combination of excitement, competitiveness and significance. N'Dam's excellent performance is a big reason for it. No fighter earned more respect in his loss than N'Dam. He deserves another big-money fight before any other losing fighter this weekend.

Lemieux's reputation as an entertaining power puncher is much deserved and now has every boxing fan asking (begging, really) for a showdown with Gennady Golovkin. Unlike the other names that get floated in connection with Golovkin, Lemieux has expressed a real interest in fighting the Kazakhstani knockout artist. Lemieux's promoter, Golden Boy Promotions, might not be as eager. Be that as it may, Golovkin's promoter recently said he'll be reaching out to Lemieux's people. If that fight can be made, there's no other matchup in the whole sport that can possibly guarantee more high-level explosiveness. 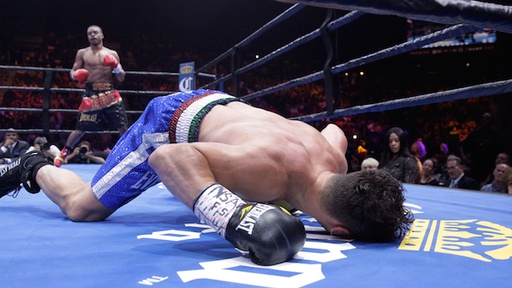 When you're the A-side and your long-scheduled opponent gets replaced with three days to go, there is only one expected outcome to the fight, assuming you want stay an A-side. Errol Spence knew this going into his fight on Saturday.

When his experienced veteran challenger, Roberto Garcia, pulled out of his nationally televised fight on NBC, Spence was paired up with Phil Lo Greco, a guy with the best record the matchmakers at PBC could find on such short notice. At 26-1, Lo Greco isn't the worse replacement ever thrown to the wolves, but with only one fight (against a no-name fighter) in the two years since his loss to Shawn Porter, Lo Greco was certainly not the freshest of replacements. Nonetheless, he came to fight.

From the opening round he refused to show Spence any real respect. He came straight to him, throwing assertively and unafraid to upset boxing's power brokers. All too often, last-minute replacements don't have the gas or the will to fight with such passion. Lo Greco isn't guilty of either. But that same gusto also meant there were plenty of holes for Spence to exploit.

This fight ranks second best of the weekend because it showed that the growing hype around Spence has merit. He's not just a skilled tactician who can move and pick his shots — he's also got some serious power on the inside that will deflate even the biggest punchers who step in the ring with him.

If Floyd Mayweather Jr. and Spence both have their way, the next big puncher in Spence's immediate future will be Keith "One Time" Thurman. Before and after Spence's knockout victory over Lo Greco, Mayweather was vocal about putting Thurman vs. Spence on his upcoming September undercard. Although, Thurman is unlikely to take a fight he views as a step down in competition, I think Spence has the tools to confound Thurman. There was plenty of rust in Thurman's game against Leonard Bundu and holes readily apparent in his fight against Robert Guerrero. Thurman may possess a bigger name than Spence, and have the biggest punch in the division, but Spence has more than enough in his toolbox to trouble, if not take out, "One Time." 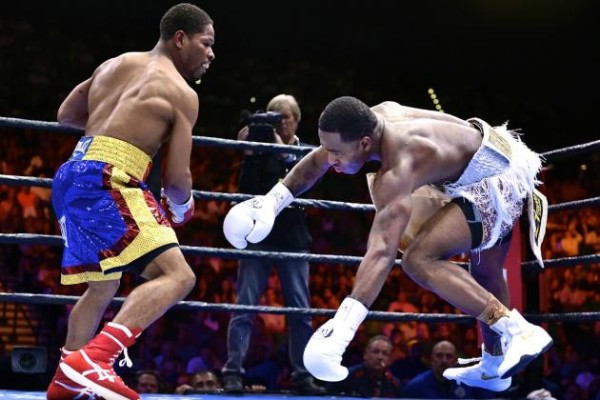 Adrien Broner is proving slowly but surely that he's all glitz and glam with very little substance. He wants to believe that his out-of-ring antics are a substitute for his lackluster performances. He thinks that even after a unanimous decision loss to whom he called the "B-side," people will still want to take his picture. And that might be true. But people still ask for Ricky Hatton's photograph too — they just aren't paying him millions of dollars to get in the ring.

Porter did his part on fight night. He was relentless. He came forward, sought out opportunities to trade and never took his foot off the gas pedal. His stamina was awe-inspiring and a testament to the conditioning skills of Kenny Porter — Porter's father and trainer. If there's fault to be found in Porter's performance, it's of a technical nature. Porter's relentlessness often smothered his own punches, and he lunged forward far too many times with his face first and without even bothering with a jab. A better fighter will find ways to make Porter pay for his shortcomings, the way Kell Brook did in the fight where Porter lost his belt.

Broner's flaws are almost too numerous to list. His unabashed hugging and shoving to avoid fighting on the inside were almost as ineffective as they were embarrassing. When Porter rushed in, he had the same answers, maybe even less, that he had against Marcos Maidana. In other words, none. Broner thinks he's a defensive wizard and has tried to adopt Mayweather's shoulder roll, but has failed miserably in executing it against high-level competition. He telegraphed his check hook for the entire fight. The fact that he finally landed a clean hook that knocked down Porter was almost as frustrating as his inaction because it reveals that Broner has power and skill. The problem is that either he's fighting as a mimicry of someone he can't be, or he has not fully recovered from the Maidana loss and is thus afraid of a hard fight on the inside. In either case, it makes for a poor fight to watch and a career likely filled with more setbacks.

This fight earns its spot by Porter's persistence, willingness to fight, and because it shakes up an already exciting division. Who doesn't want to see Porter again? A crack at Keith Thurman, Amir Khan or anyone in the welterweight division is much welcomed.

Bottom of the Class: Andre Ward vs. Paul Smith 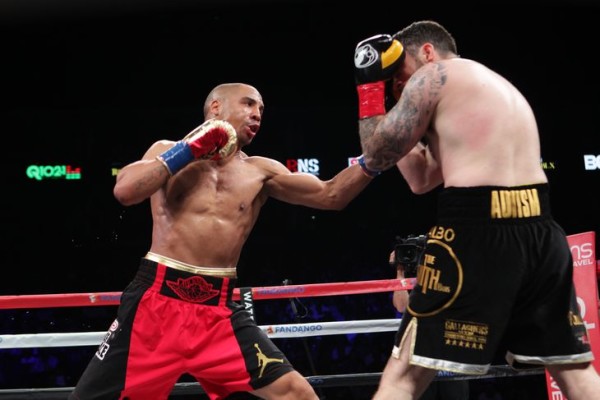 Andre Ward is back but not on top.

Ward was facing an uphill battle from the second this fight was announced. He's a spectacular fighter with few knockouts and coming off a long layoff. There's been so much back and forth between him and Gennady Golovkin that almost any opponent he stepped in to the ring against in his first fight under the Roc Nation banner was going to be criticized. Then Paul Smith was selected as the opponent. A fighter who's fought mostly at middleweight coming up to a catch weight of 172 to possibly (rumors say) test whether Ward was ready to climb into the light heavyweight ranks and (hush, don't say it too loud or it will never come true) prepare Ward for a future fight against Sergey Kovalev.

As if the marketing of this fight wasn't hard enough, Smith failed to make the contracted weight twice — first at the official weigh-in and then again during a second-day weigh-in. Smith looked pudgy coming into the bout against arguably one of the best boxers in the game. Then he tried, or at least he thought it was trying, to box with the best American amateur boxer since Sugar Ray Leonard. The fatter, slower and, let's be honest, less erudite fighter stood in front of Ward and tried to out-think him. What an absurd game plan.

The result was a one-sided blowout. The reason the fight isn't higher in this review is that there wasn't any real excitement or competition. Smith was a willing punching bag. And still, Ward couldn't knock him out. Ward's fast, perfectly placed punches landed with authority but failed to really rattle Smith. Ultimately, the fight was stopped when Smith's corner gave in to the inevitable and threw in the towel, knowing that their man had no business being in the same ring as Ward to begin with.

Ward says the rust is off now and that he can be even better. But against who is the real question. Ward is in part a victim of his own success. He's been great at picking guys apart and winning decisive decision victories. He wins but not explosively. As a result, he's a hard challenge with little reward. To complicate things further, Ward's sense of self seem out of sync with the market. Although he hasn't said it as much in his last few interviews, it's clear that Ward thinks he's more of an A-side than he really is. The truth is that in a fight against Carl Froch or Gennady Golovkin, Ward is the B-side. Is there anyone out there who thinks otherwise these days? Froch sold 80,000 tickets at London's Wembley Stadium. Golovkin shattered the StubHub Center attendance record for a boxing match. Ward can't even sell out his hometown arena.

It's unclear what's next for Ward. He says he's staying at super middleweight, so the Kovalev fight remains a distant dream. Froch has shown little interest in fighting Ward, which in my book leaves Ward three opponents whose names and records could help raise his stock: George Groves, James DeGale and Andre Dirrell. Groves gave Froch fits in their first fight, DeGale impressed against Dirrell and the matchup against Dirrell is something boxing fans have been waiting to see since Showtime's Super Six tournament. Whatever he does next, Ward needs to get back in the ring quickly. Too much of his prime years have been wasted by lawsuits and in-fighting with his old promoter. If he wants to cash in on his undeniably superlative boxing skills, he needs to take a page from Golovkin's play book: fight often and fight fierce.