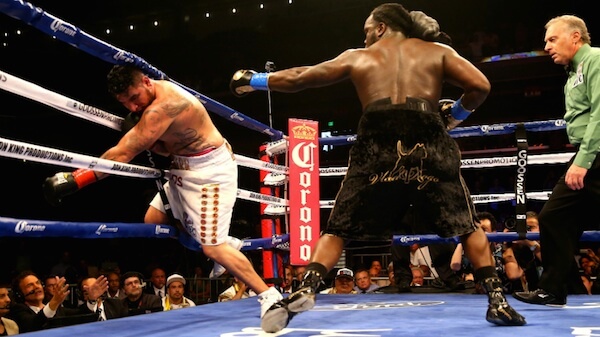 Boxing history was going to be made on ESPN this past Saturday night, one way or the other. Either Chris “The Nightmare” Arreola would become the first Mexican-American to hold the heavyweight crown, or Bermane Stiverne would be the first Haitian-born fighter to do so. In the end, the green WBC strap that has been held by Muhammad Ali, Larry Holmes, Mike Tyson and other legends was wrapped around Stiverne.

The 35-year-old champion, now living and training in Canada, won the vacant title by knockout. After six rounds, he was clearly behind on several scorecards due to his inactivity and his willingness, almost eagerness, to back into the ropes to take unnecessary punishment. But he was confident that at some point he’d a have chance to prove for the 21st time in his career just how explosive his hands can be. His opportunity came in the sixth.

Stiverne caught Arreola with a counter right hand that landed high on Arreola’s head, near his temple, and sent The Nightmare to the canvas. Even though he’s known for his prolific chin, from the second he went down, there was little chance Arreola was going to survive the round. Getting hit high on the temple or the ear discombobulates a fighter’s equilibrium from the inside out. All the will in the world couldn’t help Arreola figure out which way was up. So even though Arreola beat the count, his legs were Jello, and after a few steps and few more blows from Stiverne, the referee stopped the fight.

Stiverne is now wearing the WBC belt that belonged to Ukrainian giant, politician, Ph.D. holder and protest leader Vitali “Dr. Ironfist” Klitschko (45-2, 41 KOs). His brother, Wladimir Klitschko (62-3, 52 KOs), holds every other heavyweight title of note and would like to add the WBC strap to his collection. Wladimir has petitioned the WBC to be next in line for Stiverne’s belt, but that would mean jumping in front of the mandatory challenger Deontay Wilder (31-1, 31 KOs).

That should be prevented for three reasons. First, Klitschko has his own mandatory challenger to deal with, Kubrat Pulev (20-0, 11 KOs), who wants to take his IBF belt. Candidly, this is a mediocre reason to stop the match-up against Stiverne because Pulev has little to no chance at beating the longtime champ — mostly due to his lack of punching power. But if Buster Douglas found a way to knock out Mike Tyson, then ANYTHING is possible in the heavyweight division.

A second, much better reason is that Wilder has earned his shot at the WBC strap and is very likely to knock out Stiverne. The new champ’s performance on Saturday was lackluster in every way but the knockout. With a low output, a low guard and short arms, he’s going to be susceptible to all of Wilder’s tools in the ring. If Wilder is successful, then his set of skills and physical gifts present a much stiffer test for Klitschko, and given his flashy nature, Wilder is also likely to make the press tour much more entertaining. Third, if Klitschko beats Stiverne there’s a good chance he’ll avoid the hard-hitting Wilder, at least in the immediate future, and that’s bad for a division that is on the cusp of being exciting again.

Don King, who promoters Stiverne, sees things quite differently. Shocking, I know. King will undoubtedly do his best to ensure his last fighter of note gets a crack at Klitchko’s suspect chin and the big payday that comes along with it. Sure, Stiverne is shorter and Klitschko has a longer reach. And yes, Stiverne’s lazy left hand that he holds like he’s protecting his knees instead of his face is going to be a problem against the hard jab Klitschko throws all night. But remember that Chris Arreola, who probably has the best chin in the division, fought Klitschko’s older brother and took the beating of a lifetime but never tasted the canvass. Arreola had all sense beaten into and then out of him over the course of 10 long, brutal rounds, but Dr. Ironfist could not put him down.

The doctor has a higher knockout percentage than his little brother, Wladimir, and has always had much more of a killer instinct. Bermane Stiverne knocked Arreola senseless with one punch. A man like that, no matter what other variables are in the mix, is never to be taken lightly.