Andre Ward's (28-0, 15 KO) path to light heavyweight glory and relevance will continue on March 26th as the undefeated boxer from Oakland, California will take his talents up the street to fight Sullivan Barrera (17-0, 12 KO). Barrera, a top ten light heavyweight from Cuba, is a 33-year old undefeated fighter who has made bold claims stating that he would easily knock out the 2004 Olympic gold medalist.

For some, the opportunity to watch two undefeated fighters contend for the top spot in what some believe is now one of the three best weight classes in all of boxing is plenty enough to tune in. For many others, Barrera is a fighter that was a virtual unknown before signing up to fight Ward. Moreover, Ward's inactivity plus a recent fight against a tomato can in Paul Smith have turned fans a bit sour on the fighter who is universally regarded as one of the five best pound-for-pound fighters in the world.

So, why exactly should you watch this fight? We've got a few reasons in mind. 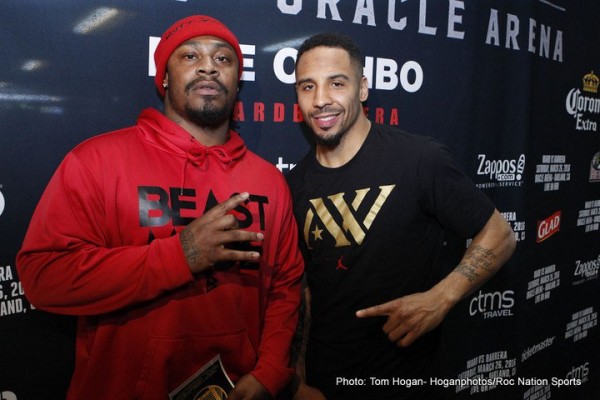 Sort of. Ward certainly thinks of himself as the best fighter around, but we simply haven't seen him in forever. Some could have had a baby or two since he last fought. But those with slightly better memories than the average millennial, know that Ward was indeed something special. How much of his old glimmer does he still possess? Can he carry the magic up a weight class? Does this version of Ward look as good as the current consensus pound-for-pound champ, Roman "Chocolatito" Gonzalez? All things we hope to find out on Saturday.

An appetizer for a superfight

The meanest man in boxing, Sergey "The Krusher" Kovalev is not only the big bad star of the division waiting for his shot at Ward, Kovalev is also going to be the imposing figure sitting ringside watching Ward, sizing up his competition (or prey, depending on how you see it). These two haven't interacted much. This weekend, and the telecast in particular will hopefully give fans a chance to see how both fighters react in each other's presence. Will Ward flinch? His fans will undoubted balk at the question, but anyone who's seen Kovalev's brutal power in action will likely think the question more reasonable.

Sure, Sullivan Barrera is a sizable underdog. He doesn't bring the frightening punching power that someone like Gennady Golovkin or Kovalev bring into the ring, nor does he have youth or experience on his side. Yet, there have been a string of upsets recently in the combat world that serve as good reminders that on a given night, no man is unbeatable. Moreover, Although Barrera doesn't have Golovkin's power, he does have Golovkin's trainer, Abel Sanchez in his corner. Sanchez is taking the right approach in trying to smoother Ward, trying to neutralize the fine work Ward often does at a distance. And with two Cuban national championships under his belt, you know that Barrera has not just been exposed to slick boxers in the past, but that he's found way to beat them.

Let's be very honest; if you had to pay for Ward vs Barrera, you'd probably just catch the highlights an hour after the fights instead of dishing out your hard earned cash. But since this is a tuneup, and is setting the stage for an eventual clash with the boogeyman of the light heavyweights (Kovalev), HBO has smartly decided to not to make it a PPV.

Ward vs Barrera is clearly the best fight on TV this Saturday. The UFC is dormant that night. Showtime isn't offering anything either. Kell Brook is fighting, but that's earlier in the day and it's against a guy that already lost twice to one of Brook's previous victims that didn't go beyond the fourth round. If you want to catch some action tonight, Ward vs Barrera (and certain the under card, Joseph Diaz Jr. vs Jayson Velez) is your best bet on Saturday night.