Amir "King" Khan won his 31st fight this past Friday night, but his opponent, Chris Algieri, won the show.

The fight, made more out of desperation than careful planning, didn't receive much praise from fans when it was first announced. It was largely looked at as a keep-busy fight and an easy way to put an exclamation point on Khan's application for the Mayweather sweepstakes. But in boxing, there is no Nostradamus. Predicting outcomes, especially how good a fighter will look in a fight regardless of the outcome, is harder to do than predicting the stock market. The Khan vs Algieri matchup was no exception.

Khan's much-lauded hand and foot speed were largely stymied, and when they appeared, each lacked the dazzle of past fights. What's worse, the same confused Khan who had no answers for Danny Garcia seemed to be back in the ring.

In the opening rounds, Khan's quick jab opened him up to repeated counter right hands over the top. Algieri tattooed Khan consistently with the right hand, a punch that everyone in boxing knows is the favored and best tool in Floyd Mayweather's arsenal. Once Khan started absorbing the scolding instructions from his trainer, Virgil Hunter, he fixed his defensive weakness to the straight right, only to open a glaring hole for left hooks. Somewhere, Danny Garcia was watching, smirking and salivating at the thought of a rematch.

Simply put, there was nothing special about Khan's performance. This wasn't an exclamation point on his application for a fight against Floyd Mayweather; it was an ellipsis, begging for a slew of questions. Did Khan have an off night, or was Algieri really able to transform himself under the wise tutelage of John David Jackson? Could Khan really have been that phased, as he said he was, by Algieri's decision to come forward instead of box? If so, how could he handle the most adaptive fighter in the sport? Does anyone really want to see him fight Mayweather anymore?

The impact of Algieri's new trainer, a seasoned former champion and proven elite trainer (who's molded the savage power of Sergey Kovalev), is hard to over estimate. Algieri wasn't perfect on Friday, but he showed more and was better in just about every quality of his fight game. He may not have won the fight on the scorecards, but his pressure, pace and spirit easily won him the show.

Everything about Algieri on Friday was the polar opposite of his performance against Manny Pacquiao. Where he fought off his back foot against Pacquiao, he came forward against Khan. Where even glancing blows from Pacquiao knocked Algieri down, flush, brutal uppercuts like the one below didn't stop Algieri's relentless pressure. 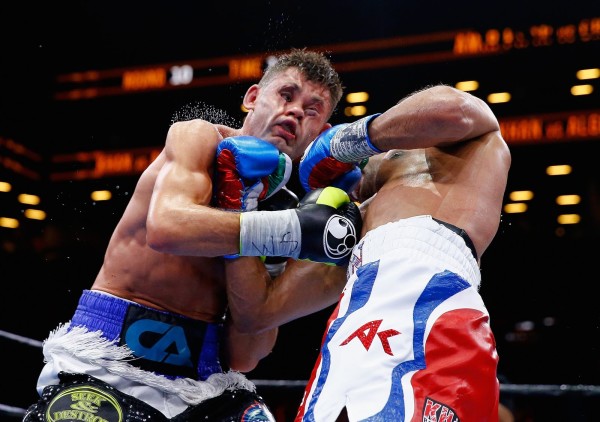 While Algieri seemed lost and without a plan against Pacquiao, with Khan Algieri seemed confident and methodical about how to achieve success. For all those reasons, Algieri is likely to get, and truly deserves, more big-name opponents. And for all those same reasons, John David Jackson will undoubtedly get more big-name fighters landing on his gym's steps, asking for his tutelage.

Seeing how poorly Khan reacted to Algieri's speed coming forward does not bode well for Khan's chances against Mayweather — or even Kell Brook. Mayweather is not, or at least has not been for almost a decade, a come-forward fighter. But all you have to do is watch Mayweather's fights against Diego Corrales and Arturo Gatti to realize that he knows how.

In certain rounds against Pacquiao, Mayweather reminded the boxing world that he knows exactly how to pressure and walk down a fighter. Does anyone in the world think Mayweather couldn't do what Algieri did but better? A younger fighter with similar speed and big punching power, like Kell Brook, could likely do the same, and perhaps that is a big reason why Khan has avoided Brook at all costs.

Now, the long wait begins. Mayweather will not be announcing his next opponent anytime soon. It's not his style. Khan is crossing his fingers, hoping his ticket will be plucked from the many lottery entrants, but after Friday he has to know that he's no more deserving nor appealing a final opponent than even his own countryman, Kell Brook. And then there's a guy named Miguel Cotto out there with a lineal middleweight title he doesn't seem too keen on defending against full-fledged middleweights. There's along a young buck named Canelo Alvarez who's grown up a lot in the past year. Among just these four names, Khan is trailing the pack by a wide margin.

I'm no Nostradamus, but my crystal ball says you won't be seeing Mayweather vs. Khan in lights anywhere near the Las Vegas strip in September.