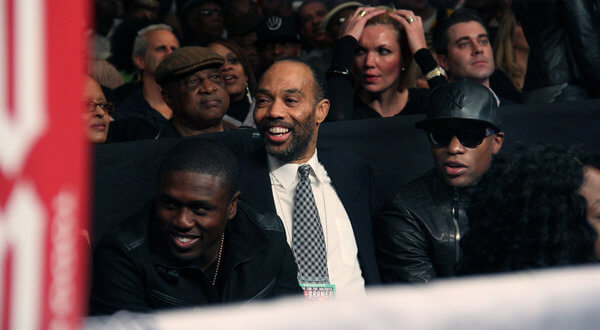 In the boxing world few other names are more respected or feared. What makes Al Haymon unique is his nearly religious aversion to publicity. I doubt there's another figure in all of sports who has so assiduously maintained a vow of silence with the press while at the same time wielding industry-wide power.

For years, Haymon has managed to avoid the headlines. But in 2013, as his number one advisee, Floyd Mayweather, signed quite possibly the most lucrative sports contract in history, Haymon's name has been noticeably more present in the news (not least of which has been his recent listing as Sports Illustrated’s 42nd most influential man in sports). To be sure, his boxers — such as Danny Garcia (WBC/WBA light welterweight champion), Leo Santa Cruz (undefeated Mexican standout) and Andre Berto (former welterweight champion) to name a very select few — have always paid their respects to Haymon whenever an interviewer asked whom the fighter wanted to face next. Invariably the answer always seemed to be some version of, "Whatever Al Haymon wants."

I don't pretend to know basketball or tennis, football or golf, or pretty much any other sport the way I know boxing and MMA. My domain lies in fighting, in the one-on-one testing of wills via the primal act of combat. But I try to keep abreast of the major trends outside the ring, and I can't remember the last time I heard multiple superstars in one sport say their careers were in the hands of one man, much less the same man. Professional athletes know better than anyone else the personal sacrifice and hard work it takes to get into the highest ranks of a sport. As a result, they guard their autonomy as best they can. But in boxing, not only do contenders and champions lay their career trajectories at the feet of Haymon, but fighters at all levels clamor for the opportunity to do so. Can you imagine Drew Brees, Tim Tebow and Michael Vick all saying they were each going to make a move to a new team based on whatever one man told them to do? And then can you imagine that same man refusing to give interviews or even be photographed about how and why he made a given decision? That is exactly what Haymon does for his boxers regularly. (Note that the picture above of Haymon is one of a highly select few available of the man.)

In the past, Haymon’s close relationship with HBO has been public but quiet — as is Haymon’s M.O. Max Kellerman, an HBO boxing announcer, however, recognized Haymon’s unusual influence on the network two years ago, after Andre Berto won Jan Zaveck’s IBF Welterweight title. At the time, one of the major criticisms of Berto was that he was fighting subpar opposition on HBO for huge paychecks — the result of Haymon’s handy work.

Now, in 2013, Haymon’s name has been intimately involved in the war between HBO and Showtime, but not on the side of his old bedfellow. Under his guidance, Floyd Mayweather signed on with Showtime, and as a part of the deal it seems, the longtime HBO rival got an influx of Haymon fighters. In the past two months, Danny Garcia, Leo Santa Cruz, Floyd Mayweather, J’Leon Love and Austin Trout — all Haymon fighters — have fought under the Showtime banner. And Adrien Broner will join that group when he fights Paulie Malignaggi on June 22. How does a man who never speaks (in public) wield that sort of power? Does he have anything approaching an analog in another sport? I just don’t think so.

Are there more powerful people in sports? Of course. The commissioner of any major league sport without a doubt has more power. But commissioners don’t fit the criteria for the title I started out with: the most powerful quiet man in sports. As we all know, the commissioners get their fair share of press time. Much the same can be said of any major sports agent. In all my research, I can’t even find a single quote from Haymon about boxing! Not one! That alone probably separates Haymon from every person ahead of him on Sports Illustrated’s 50 Most Powerful People in Sports list. Agents certainly find themselves in front of tape recorders and cameras, especially when they need public pressure to help push through deals — a tactic Haymon has simply never employed. More importantly, however, Haymon isn’t at the beck and call of athletes in the way that agents are. Haymon is the general who plans the war from his home office, while agents are those sullying themselves trying to execute Haymon’s masterful plan.

What adds further to Haymon’s mystique is his professional life before boxing. Haymon didn’t rise through the ranks in boxing the way other sports power brokers seem to have done in their sports. Haymon received his education from Harvard and ended up running a successful business putting on concerts for musicians such as MC Hammer, New Edition, Whitney Houston and Mary J. Blige. Even after his rise to prominence in boxing, Haymon has continued his music business, recently putting on events for Lil Wayne, T.I. and Jill Scott. Haymon’s entertainment know-how even extended into the comedy world, by way of co-promoting the famous “Eddie Murphy Raw” tour.

Haymon came into the sport only about a decade ago, around 2000. He made the jump into boxing by representing Vernon Forrest. Haymon brokered the meeting between then pound-for-pound champ Sugar Shane Mosley and Forrest, which ended in Mosely’s first two defeats — results that shocked the boxing world. Then, Haymon’s heavyweight, Lamont Brewster, knocked out European sensation Wladimir Klitschko (which to date is Klitschko’s last defeat). From there, Haymon’s stock rose exponentially. Who else has made such an impact in their sport so quickly, so unexpectedly and so quietly? Moreover, this isn’t a situation where an oil tycoon bought his power by outright purchasing a sports team. Haymon has earned his place in today’s boxing business pantheon, one fighter at a time.

It’s likely that Haymon’s uniqueness is the product of the structure, or lack thereof, in which boxing subsists. For anyone who’s followed the history of the sport, it’s hard not for Haymon’s mysterious power to call forth memories of the influence that La Cosa Nostra once held on the squared circle. But enough of Haymon’s record survives for curious onlookers to know that Haymon’s ability to manage large personalities and understand the nuances of the entertainment business has propelled him to the top of the boxing world, and nothing else. So long as Haymon continues to bring crowd-pleasing fights, as with April’s match-up between Peter “Kid Chocolate” Quillin and Fernando Guerrero (both Haymon fighters), the boxing public will be just as happy as many fighters to let Haymon pull the strings of the sport behind his veil of silence.

8 Replies to “Al Haymon: The Most Powerful Quiet Man In Sports”