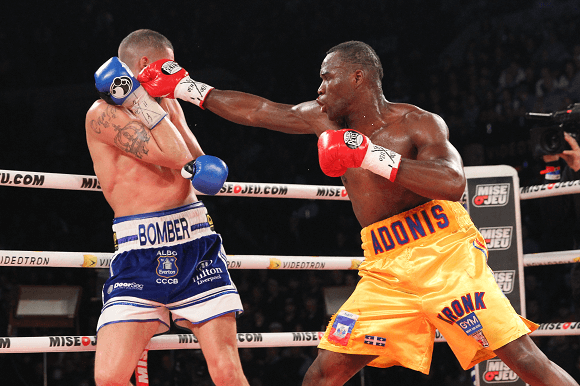 When either of these knockout artists step into the ring, you can’t look away from your screen. You can’t get up for a second drink. You can’t waste time on picking up the phone. You can barely afford to blink because in that instant of distraction Adonis Stevenson or Sergey Kovalev might let loose the dynamite power punch that ends a fight.

Four fights in 2013, and four stoppages. Stevenson has completed and legitimatized his transformation from an avoided Super Middleweight to a Light Heavyweight Champion. The last knockout artist to come from the late Emanuel Steward’s iconic Kronk gym, Stevenson continues to show wrinkles to his game. Unlike his fellow Light Heavyweight title-holder, Kovalev, Stevenson has displayed fleet-footedness and boxing craft that nearly match his prolific punching power.

In Saturday night’s mandatory defense of his title, Stevenson built upon the boxing clinic he gave Tavoris Cloud only a couple months ago, showing Tony Bellew, the feisty challenger, and the boxing world that he’s got more patience than the average power puncher. Stevenson was content to outbox Bellew for six rounds before finally knocking out his taller opponent.

In the post-fight interview, Stevenson had three things on his mind: vacation, Carl Froch and Bernard Hopkins. The name Kovalev only reluctantly came up as HBO announcer Max Kellerman asked Stevenson if he’d be willing to fight the undefeated Russian wrecking machine.

Watching Kovalev’s two-round destruction of Ismayl Sillakh earlier in the night would clue you in to why Stevenson was hesitant to bring up Kovalev’s name.

While Kovalev’s punching power may rival Stevenson’s own, Kovalev showed in his first round against Sillakh that his rough footwork leaves him vulnerable to superlative boxers. Assuming, of course, that the boxer has the defense to avoid Kovalev’s right hand and the stamina to keep sharp for 12 rounds. That's something Sillakh could clearly not do.

After Saturday, it seems hard to believe that HBO would want to do anything but pit these two exciting power punchers against each other. It would be a hell of a way to kick off the first quarter of the new year. A win for either would cement the victor as the man to beat in the light heavyweight division. It would clear the way for big-money fights down the road, against: Froch, who barely survived his last fight but brings with him enormous buying power; or maybe Andre Ward — who has long talked about his eventual move into the Light Heavyweight division; or even the elusive Bernard Hopkins, who recently defeated his mandatory challenger in an exciting 12-round decision. But with Hopkins there’s the added ordeal of television network politics to deal with. As with our federal government, politics always seem to get in the way of good work and are generally a euphemism for obstructionism. Alas.

Whoever is next for either Stevenson or Kovalev, we’ll be watching, unflinching, undistracted, waiting for the dramatic tension they bring into the ring to shift chaotically, and excitedly, into the catharsis of a knockout.