The No. 4 Iowa Hawkeyes have drawn a lot of criticism this year for lacking excitement like that kind that followed Jim Harbaugh to Michigan or not showcasing explosive, dominating play like the kind that Nick Saban cultivates at Alabama. But people need to kill that noise because the Hawkeyes play a different kind game – a careful more thoughtful brand of football. And that doesn’t make them undeserving of a playoff spot nor does it warrant the many naysayers crying foul.

Let's face it, nobody thought the Big Ten championship game would be serving up the winner a No. 4 spot in the College Football Playoff on a silver platter, but here it is. And since reality is perception, here are a few things that should lend to your Hawkeye cognizance heading into Saturday’s game against the No. 5 Michigan State Spartans.

What’s Luck Got To Do With It?

To win any sort of contest, you have to be good and you have to be lucky. Iowa has proven they can be good, finishing the regular season with an undefeated record, but they faced complications and hardships like everybody else. Most notably, they suffered from several injuries. In their 30-point win over No. 13 Northwestern, the Hawkeyes had an offensive line that featured zero starters from the start of the season – instead they won with a walk-on tackle, a true freshman guard and a guard that had never played tackle in a game. Also, the Hawkeyes lost All-Big Ten senior defensive end Drew Ott for the season when he tore his ACL against Illinois. Redshirt freshman DE Parker Hesse stepped up and made a huge pick six against Nebraska and has been solid ever since.

Do something like this, and you'll win @B1Gfootball weekly honors. Just ask @HawkeyeFootball's Parker Hesse. https://t.co/JwH03hLu1N

Are You Not Entertained?

From gutsy third down plays in their own territory to 57-yard game-clinching field goals, the Hawkeyes have brought their own brand of excitement to the game. It may not be the Oregon offensive hyper-drive or a 93-yard Notre Dame kick off return to the house, but it gets the job done. 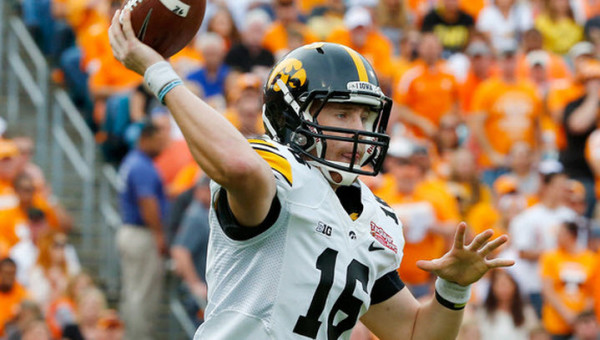 The Hawyekes are more provocative then they let on; Iowa has a conference-best 16 plays of 40 yards or more this year and they have three different running backs that topped the 195-yard mark this year. Iowa’s running backs each have long runs of 75, 65, 51, and 45 yards; three of which resulted in touchdowns, and quarterback CJ Beathard has a long run of 57 yards. Iowa also boasts a balanced offense, 2,407 passing yards and 2,444 rushing yards, which may not be sexy but is effective. Defensively, Iowa leads the Big Ten with 17 interceptions which have resulted in four touchdowns.

Being able to close out close games has put Iowa over the edge this season. That's what a balanced attack gets you.

Only As Strong As Your Schedule

Here are the facts about Iowa’s schedule:

In fact, there are three wins that to the undiscerning eye might appear weak, but are actually part of the Hawkeyes strength. The first was Iowa’s 31-14 win over Illinois State, a team that was the 2014 FCS runner-up and entered the 2015 season ranked #1. The second was Iowa’s 31-17 victory over Iowa State – rivalry games are always hard to win, and the Hawkeyes domination in this game speaks to their resolve and fortitude. And lastly, the 27-24 win over Pittsburgh, who started the season 6-1 before dropping games to North Carolina, Notre Dame and Miami.

Iowa doesn’t blow teams out, that’s not the Hawkeyes style. Essentially, Iowa is kind of a control freak – control the clock, control the pace of play, control the score. They simply wear teams down with their offensive line, and bust a big play when the opportunity calls. If you like offensive line play and fullbacks leading the way, the Hawkeyes have run these units to perfection.

The most undervalued asset that Iowa brings under Kirk Ferentz’s reign is development. Look at junior Desmond King for example; a 2-star recruit that is one of five players in the country under consideration for the Walter Camp Award for the best player in the nation, and the only defensive player on that list. He already won the Jack Tatum Award, presented to the top defensive back in the nation. King is also a finalist for the Thorpe Award, given to the top defensive back of the year. He was also named the Defensive Back of the Year in the Big Ten. Accolades on accolades for the first true freshman to start in defensive secondary since 2002.

The Big Ten Championship Game is going to be a true test for Iowa. Michigan State is a good team that doesn’t make many mistakes, but the Hawkeyes will need to beat them in the air with a solid passing game from Beathard while its defense will need to commit to stopping the run. Getting to Spartans quarterback Connor Cook will also be key for the Hawkeyes. This game, like most great football games before it, will be won at the line.