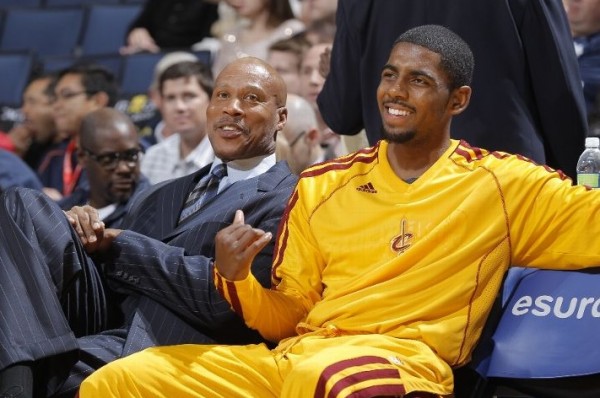 Replacing a superstar isn't easy, but Kyrie Irving is well on his way to becoming one in his own right.

The other day, someone asked me a simple question.

"Outside of the usual suspects, who would you pay to see play in person?"

The "usual suspects" referred to here are obvious. LeBron James, Kevin Durant, Kobe Bryant, Chris Paul, Derrick Rose, Carmelo Anthony. You know, guys of that nature. The ones who are either referred to by one name or a cool-ass nickname. Team-wise, it's definitely the Houston Rockets. One, because of James Harden (that's not my answer). And two, because I know I'm probably the biggest Chandler Parsons fan outside of Florida alumni and members of the Parsons family. Individual player-wise, and this actually is was my answer, it's without a doubt Kyrie Irving.

Friday night was a blur. I planned on going to the Wizards/Lakers game but couldn't fathom paying $80 for seats that would've put me at in the very last row of the 400 section. In other words, Kobe and Dwight would've looked like the same person from my seat. At least until they went to the free throw line. Plans were altered, and I ended up at this place called Penn Social for my boy Hype's birthday, about a block or so away from the Verizon Center. The drinks were cheap. The people were great. The only downer was the brawl at the end of the night. I've see bar fights before, but given the events which happened in Connecticut at Sandy Hook Elementary not even 24 hours earlier, maybe I had the false hope people would chill and not let their emotions get the best of them for one night.

Saturday night, however, was relaxing. The usual trip to the Black man's holy grounds - the barbershop - was made. I even hit the local sushi spot to taking full advantage of its all-you-can-eat deal. Later that evening, the Knicks and Cavs squared off in the Garden. The Knicks continued their current magical season with a 103-102 victory, sans first month-and-a-half MVP Carmelo Anthony, thanks to Anderson Varejao's missed free throw with a second left. None of that mattered though. They're two teams headed in two completely different directions. Cleveland is 5-20 and appears destined for another top five pick in June. New York is thinking Finals. This, on the other hand, did:

Since the 1985-86 season, a line of 41-5-5 has only been posted 11 times. By who? Michael Jordan, LeBron James and - wait for it - Antoine Walker. Dropping 40 in the Garden is impressive however it's done. Kyrie made it 12 and did so with a broken jaw and donning the Zorro mask Kobe used in Detroit last year. He embraced the electricity MSG emits, either creating legends or lambasting failures. Irving legitimately spawned the world's most famous arena into Rucker Park. Ray Felton was on a string all night. Jason Kidd met the same fate. He penetrated, often finding the open man. His inside game was working as was his outside game. And that three pointer he hit near the end of the fourth quarter where he spun at half court taking the ball in between his legs and hitting nothing but the bottom of the net? Dirtier than an Atlanta health clinic following Freaknik. The only aspect he needs to improve is defense, the same trait another previous Cleveland #1 overall pick improved upon from his rookie season making him one of the most fierce defensive specimens in basketball. 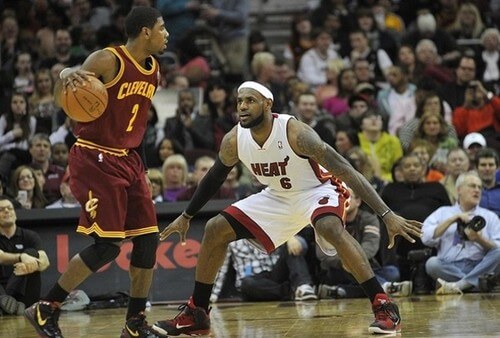 Despite not being the prototypical pass-first point guard, Irving's got all the tools. And he's not even old enough to drink yet. Coming into Cleveland, the stage was set for him to be a bust. People lament on Greg Oden's injury-prone career, but Kyrie's only season at Duke basically never happened. He played in only 11 games and missed everything from the early part of December to the start of March Madness. Still, sheer talent and a ceiling not many in the NBA could even fathom touching landed him at the #1 spot. And not your every-year #1 spot either. Pegged as the future of a franchise still struggling to come to grips with the fact LeBron bolted for what we know now as greener pastures and sandier beaches in Miami, Irving's plate was and still is full.

There wasn't any possible way Kyrie could ever live up to the expectations James laid before him. It's like performing after Michael Jackson at the Grammys. Yet somehow, even with Cleveland doing usual Cleveland things record-wise, he's carving his own legacy. His offseason, friendly back-and-forth with Kobe Bryant was awesome, albeit ridiculous. Then, his 28-11-6 against Kobe and those same Lakers happened last week. Kyrie's a dog in every positive sense of the world, leaving only two legitimate concerns.

Can Kyrie stay healthy? Adding his lone season at Duke, his rookie year and the current campaign, Irving's played in only 76 of a possible 128 games, or about 60%. Keeping him off the DNP list is more important than anything at this point because it's fruitful for the progression of his game. It's ideal for the Cavs to have their best player, cash cow and face of the franchise on the court as opposed to street clothes. And it's lucrative for the NBA to have one of its better young players on the floor. So, yes, here's to hoping these injuries are more freak accidents than potential red flags. And if all else fails, Dan Gilbert should invest in one of those hyperbolic chambers Terrell Owens allegedly slept in weeks leading to the Super Bowl in 2004 to help accelerate the healing process on his broken leg.

Of equal importance, can Cleveland put a team around him? During LeBron's time in Cleveland, the Cavs only managed to bring in Mo Williams, a vastly over-the-hill Shaquille O'Neal and Antawn Jamison. Mo was serviceable at times but far from reliable co-star. Shaq simply wasn't a difference-maker anymore; a superstar off name alone and one whose last inkling of prime left him directly following the Heat's 2006 title. And Jamison to this day still has nightmares of Kevin Garnett verbally and physically abusing him during the infamous 2010 second-round series vs. Boston, which is another topic in itself.

Meanwhile, for Kyrie, Dion Waiters has gunner written all over him and a possible second option pending his shooting improves. Varejao appears to be coming into his own this year, but every contender with assets will be after him come February. And for whatever reason, I'm still of the belief Tyler Zeller can be an effective starting center. For the Cavs to build anything of note, it's going to have to be done through the draft and well-thought-out free agent signings. They're never going to get big-name free agents because, well, not many players are willing to move there. Just ask Joakim Noah. What's all this mean? The Cavaliers should pray their draft-day decisions make them Oklahoma City East.

The future is the future with that said. Focusing on the present, let us all agree Kyrie needs to be in Houston in two months. And not just for the Rookie/Sophomore game either or to defend his MVP honors in that same game. Outside of Rajon Rondo and Deron Williams, and with all due respect to Jrue Holiday, that's Kyrie Irving's spot. Plus, there's this shaky suspicion I've got where Kyrie closes the game with Carmelo, Deron, D-Wade and Tyson Chander and do something off-the-wall. I don't know, maybe it's hit the game-winning three off a penetration pass from Bron and/or Melo. Or vice versa. I don't know. It's just a hunch, but whatever the case Kyrie Irving needs to be playing on Sunday in Houston in February.

He's a special breed of assassin and efficiency making the game of basketball a joy to watch. He's not the next LeBron for Cleveland, but he doesn't need to be. Kyrie's the first Kyrie. And what do you know, the Cavs come to D.C. the day after Christmas. This is perfect.