As CBS’ Jon Rothstein puts it, “This is March.” A glorious month filled with brackets busted by glass slippers and players plucked from obscurity by buzzer-beating buckets.

However, as one settles into the tournament, there can be an inevitable struggle to find someone that embodies the kind of basketball you truly enjoy. Do you prefer ground-and-pound or sharpshooting from long range? Do you love outspoken personalities or the laid back type? Whatever you choose, the tournament has it all, but more likely than not their fate will end like everyone else’s… with a broken heart.

What if I told you that you didn’t have to choose, and you could literally have it all?

Ladies and gentleman, the days of choosing are officially over, thanks to Mr. Right, UCLA’s Lonzo Ball, and Mr. Right Now, Oregon’s Tyler Dorsey.

UCLA’s standout freshman point guard hasn’t exactly been under the radar this season – between the attention he gets for his play and the off-court comments made by his father, everyone in college basketball knows this kid’s name. The LaVar Ball Show, which has been distracting for most, has barely registered for Lonzo Ball, as evident by his solid play.

He finished with 15 points, four rebounds and three assists in UCLA’s first round 97-80 win over Kent State despite suffering a hard fall on his hip in the first half. He also managed to break UCLA’s all-time season assists record with a total of 257 assists, passing the record of 256 set by Larry Drew II in 2012-13.

Ball showed up strong again in the second round, leading the second-half charge against Cincinnati, defeating the Bearcats 79-67. He finished with a team-high 18 points and nine assists, adding seven rebounds as well. Beyond the numbers, Ball’s feel for the game is that of an old basketball soul trapped in a 19-year old body.

“I’m a game of runs, I feel like I have a good feel for the game and when it’s time for me to make plays I try to do my best,” explained Ball in the post Cincinnati game press conference.

UCLA head coach Steve Alford added: “He has a great feel for the game, not good, great.”

Ball’s vision, likened to that of Jason Kidd, is what makes a great player – the kind of player that can shoot the needed shots, make a pass no one else sees or grab a game-winning rebound. But his demeanor, his ability to do what is needed without getting emotional and stay focused on the task at hand, is what sets him apart.

“Obviously there is a lot of pressure on him,” said Alford after the Kent State win. “He’s got a huge following, so to perform at a high level all the time, that’s not easy. That’s what he’s built for – he’s built for pressure. He’s built to excel in the toughest environments and the toughest opportunities, challenges that are out there. He’s done that time and time again.”

Much of the Ducks’ attention this season has been on junior Pac-12 Player of the Year Dillon Brooks, who leads the team with 16.4 points per game.

But it wasn’t Brooks who saved Oregon’s Tournament dreams from being dashed by Rhode Island Sunday afternoon – it was sophomore Tyler Dorsey who hit two big three-pointers in the last two minutes to lift the Ducks to a 75-72 victory over the Rams. He finished with a game-high 27 points.

In fact, since the start of the Pac-12 Tournament five games ago, Dorsey is averaging 23.6 points and shooting 53.5 percent (15-28) from beyond the arc. This has earned him the moniker “Mr. March.”

“He is Mr. March,” exclaimed Brooks in a post game interview with Pac-12 Networks. “He led us and now we are marching to the Sweet 16.”

According to Oregon’s sports information director, Pac-12 Networks analyst Matt Muehlebach was the first person to call Dorsey by this nickname and it has since stuck with the sophomore in a big way.

“He’s a player,” said head coach Dana Altman in the press conference after the Ducks’ win over the Rams. “That scorer mentality I want him to have, but defense and rebounding, when he focuses on those two he becomes a special player. He becomes really special.

“I think that’s part of the reason why he’s exploded here lately, is that he’s been a complete player, offense, defense, and the boards, five rebounds, three steals today. Those are just not maybe as important as those two three’s, but pretty close.”

Dorsey reportedly “didn’t want to go home,” so he put his team on his back.

He and Lonzo Ball have that gamer mentality in common, especially when it comes to elimination games. But the big difference between the two comes down to style: Dorsey wears his emotion on his sleeve while Ball is a more quiet contender.

That means college basketball fans get the best of both worlds in this year’s March Madness. 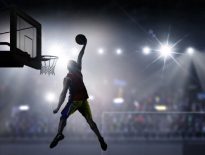