The coronation of LeBron James occurred this past Tuesday night, as the ring ceremonies, commercials and commentary that surrounded the return of the King to the NBA. Now as an NBA champion, LeBron no longer has the pressure of winning his first ring, rather winning a series of rings to cement a legacy one of the greatest players of all-time. However, while LeBron now has his first, many others are still without the precious hardware.

In part four of our NBA Question of the Day series, we ask a simple question to you the reader. Who needs a title more? Carmelo or Dwight? Our debaters for Thursday are Jason Clinkscales of New York, New York, and Phillip Barnett of Bakersfield, California. Let the debate begin. 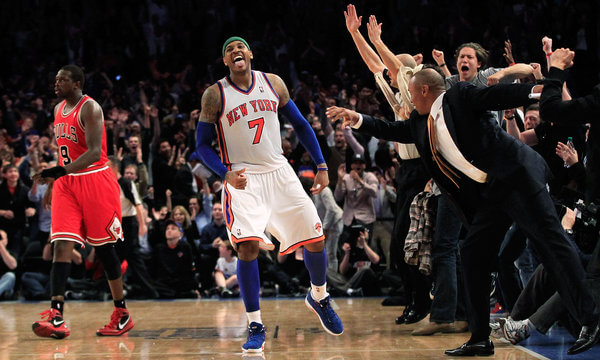 In terms of insufferability, most people who ‘hate’ New York will say that Knicks fans as a whole are equally, if not more insufferable than those Lakers because the team hasn’t won a NBA championship in close to 40 years. [Note: This generalization bothers the hell out of me. Knicks fans are as diverse and divided as the boroughs and towns we live in. Contrary to the stereotype, we don’t bring up past glory because right now is always a far more of an interesting topic.]

So, add that to the laundry list of reasons why the proverbial pressure is on Carmelo more than any other player in the NBA in the post-‘Ringless’ era. Not following the script of being the Larry to LeBron’ Magic, “Stop Snitching” and Mardy Collins, criticism about being an offensive black hole and defensive liability, forcing a trade to the Knicks, allegedly having a say in Mike D’Antoni’s resignation, the lack of chemistry with Amar’e Stoudemire, being the best of the ringless from that historic ’03 draft class… oh, and actually playing for the Knicks.

Dwight Howard can say that at least on his own (and some thanks to Rafer Alston in 2008-09) he reached the NBA Finals, and almost returned there the following season. Melo, on the other hand, has only gone past the first round of the playoffs once in his career; a point that is constantly made by those who don’t believe he’s an elite player or superstar. Anthony can be Mayor, Governor, or even Senator for Life if he does what countless former Knicks were unable to do since 1973, help bring home that long-awaited title #3. With the inherent pressures of being a professional athlete, all LeBron’s first championship did was add another weight to carry on a Melo’s already-burdened shoulders. 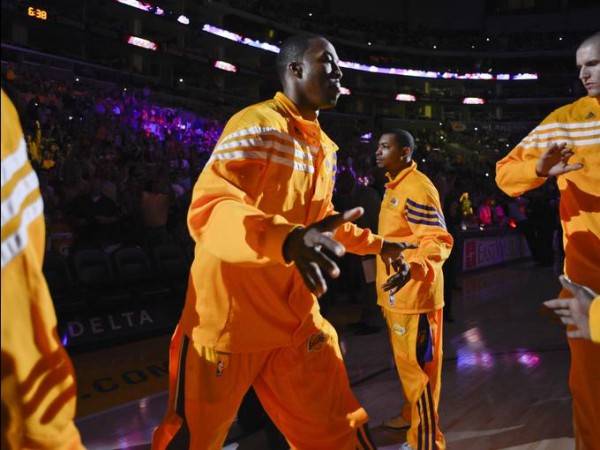 No one enjoyed the way both Melo and Dwight found their way onto their respective new teams, and the details will be spared here because I'm tired of hearing about it, writing about it and reading about it. However, now that Melo is on the Knicks and Dwight will suit up as a Laker for the first time tonight -- the NBA's two most talked about franchises -- there will be a lot of pressure for both men to finally win their first title. The fact that you have to an old man right now to have seen the Knicks win their last title leaves Melo in a bad place, but right now, Dwight Howard undoubtedly has much more pressure to win right now than Melo.

There is this place on the West Coast called Los Angeles that happens to have a collection of the most insufferable fans who love nothing more than to count rings and the points some cat named Kobe scored on one fateful night on Jan. 22, 2006 against some dinosaurs. And that guy happens to be Dwight's teammate. And Steve Nash. And Pau Gasol. Dwight Howard is surrounded by more talent than he has been in at any point of his career -- and he's joined a franchise whose emphasis on winning "right now" is at an all time high. Not only is Dwight perusing his first title, but he's on a journey with Nash to get his 1st and with Kobe to get his 6th. On top of all of that, the Lakers would love nothing more than to tie (and eventually surpass) the Celtics on top of the all time NBA Championship list. So yeah, Melo has been brought in to finally stop the Knicks championship drought, but Dwight has been brought over to help improve on not only his own legacy, but the legacy of some of the NBA's all time greats and the NBA's greatest franchise.

5 Replies to “NBA Question Of The Day: Who Needs A Title More, Carmelo Anthony Or Dwight Howard?”