"I would like to be traded, yeah. Tough as it is to come to that conclusion there's no other alternative, you know?" -- Kobe Bryant

Kobe Bryant's public demand to be shipped out of Hollywood in 2007, while a guest on The Stephen A. Smith Show, was a ground-breaking story. Here was Bean - arguably the league's best player at the time and by far its most polarizing - stuck in an unenviable phase of his career which saw pundits publicly doubting if winning a title without Shaq and as the unquestioned Alpha dog was even possible (who had won alongside Dwyane Wade in Miami a year before).

There was panic in Kobe. The demand proved such. He knew, as an 11-year veteran, more seasons were behind him than in front, and the situation needed to be remedied quick, fast, and in a hurry. The image of the Kobe we see now  - the possessed workaholic whose determination to win conjures memories of Michael Jordan - was preceded by the "selfish superstar who would never trust his teammates enough to be called champion again" stage. Yes, people, there was a time when Kobe was the only player in history with three rings and none of them meant jack sh*t in the eyes of many.

How the story panned out is as simple as a Google search. Kobe never left L.A., quickly reversing his stance. The Lakers eventually got it right and traded a lifetime cannabis club membership and a pack of wine black and milds in Javaris Crittenton and Kwame Brown, the gem who became Marc Gasol and two first round picks in 2008 (Donte Greene) and 2010 (Grevis Vasquez) to Memphis for Pau Gasol. Kobe and Pau eventually appear in three consecutive Finals, winning a pair. But because it is March and the playoffs don't begin for another month and a half, we'll play the "what if?" game. The game where right and wrong answers take backseats to almost unrealistic conspiracy theories.

In this case, what if Kobe Bryant's trade to the Chicago Bulls went down? It's not a matter of if the NBA landscape changes moving forward. It's more like how much. The answer may surprise you.

1. The Makeup Of The Chicago Bulls

So Kobe's traded to Chi-Town for Luol Deng (despite Kobe's demands otherwise), Tyrus Thomas and, maybe, Ben Wallace. While not equal compensation,  at least the Lakers receive something out of the deal and building blocks for the future (which we'll get to later). This means Bryant's looking at a tentative lineup of Kirk Hinrich, himself, Andres Nocioni, Drew Gooden and Joakim Noah. With Ben Gordon coming off the bench, too. That's not enough to win the East (especially since Boston snagged Ray Allen and Kevin Garnett that same summer), but it does make Chicago immediately more competitive and an attractive pick for nationally-televised games. Plus, there's the entire "Kobe in Chicago going shot-for-shot with Jordan's legacy" dynamic, which he would have relished. Wearing #24, too? Too good to be true.

Now, keep in mind, Chicago likely ends up in the playoffs the 07-08 season with Kobe landing in the MVP conversation. The Bulls have their first true megastar since you know who and Harold's Chicken somehow finds a way to name a sauce after him. All seems well and they appear one more piece (maybe Gasol comes to Chicago? It's a reach, so what?) from a legitimate championship contender. Who knows, but said piece definitely wouldn't have been... 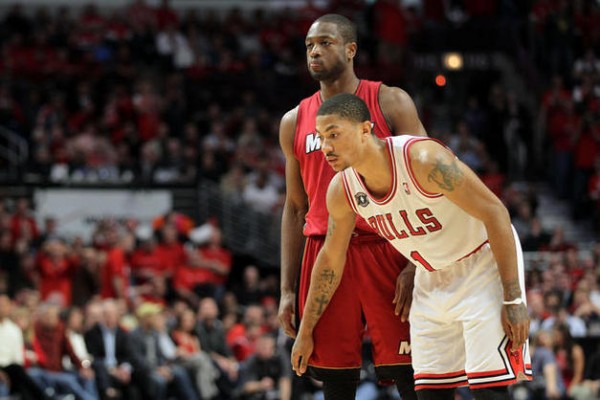 There's no way Chicago snags the number one overall pick in 2008, meaning the Miami Heat land in that spot. Suddenly, things get crazy picturing a Derrick Rose, Dwyane Wade and Shawn Marion trio in South Beach. Now, with all due respect to the season Michael Beasley put together at Kansas State in 2007-2008, franchise-esque point guards (which Rose was touted as) are rarities. Suddenly, these Bulls/Heat match ups in 2008-2009 have storylines oozing out the edges with Kobe vs. a completely rehabilitated Wade and Wade/Rose returning home twice a year.

Given how Rose's career has progressed over the years, the selection makes sense for Miami, and the possibility of a Rose/Wade fast break is pretty damn cutthroat. Suddenly, we're looking at power struggles out East with Kobe's Bulls, Wade/Rose's Heat, the Boston Three Party (plus Rondo), Dwight's Magic (that 2009 team should have never removed Rafer Alston from the starting lineup in the '09 Finals) LeBron's Cavs and Detroit's last stand.  Sound like the world's greatest cluster*ck yet? Of course, it does. 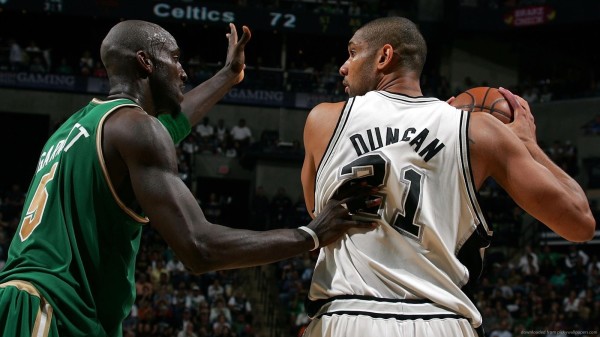 With the Lakers momentarily removed as a title contender, someone has to step up and take the helm. San Antonio assumes the role as the West's most dominant team, guaranteeing Tim Duncan gets one more shot at a fifth ring. Finally witnessing Tim Duncan and Kevin Garnett - the two most important power forwards of their generation - (potentially) square off in the 2008 Finals sells itself (for basketball nerds at least). Then there's Tony Parker taking on a young Rajon Rondo. The Paul Pierce, Ray Allen, Manu Ginobli dynamic which would've produced God-knows-how many circus shots and hot streaks. And then the sideline X's and O's chess match between Doc Rivers and Gregg Popovich.

As far as 2009 goes, ponder a Houston/Denver Western Conference finals. Just cause we're so far in the "what if" game and because it's my post, and I'll alter history if I damn well please. Let's say Yao never gets injured either. With the talent on both teams, it has the potential to be a series defined by Ron Artest's defense, Melo's pure scoring knack and the all-around dominance that was Yao.

And for the hell of it, let's say Houston wins the series 4-2. Better yet, 4-3 with a fourth quarter thriller in Game 7. How's a Yao Ming vs. Dwight Howard Finals matchup sound? You know, pending the traffic jam that is the top half of the East in 2009 still works in Orlando's favor. It's not Hakeem vs. Shaq, but it would've been the first championship series headlined by the centers since then. Yao treats Dwight like Hakeem did Shaq in '95, for the record.

2010? I've already addressed this, so let's move on. That wound still cuts deep.

Ah, yes. Let us recap, shall we? The Lakers send Kobe Bryant to Chicago in 2007 in the trade we discussed earlier. Since then, they've watched Western Conference teams take their spot in The Finals while they struggle to make the playoffs. And even when they do, it's not like they make much noise. But, it's always a plan with Mitch Kupchak. They've played quiet for long enough and now the summer of 2010 has arrived. The money is there as is the luxury of possibly snagging "two big free agents." And perhaps more than any team with cash to blow that offseason, the Lakers have history and a ceiling full of banners equating to the world's greatest business card.

Imagine if the Lakers sign Chris Bosh and LeBron James joining a still young Andrew Bynum (somewhere, a Lakers fan head just exploded). Some random, serviceable point guard, Bron, Deng, Bosh and Bynum? If LeBron caught flack for "The Decision" and breaking up with Cleveland to head to Miami, imagine if he announces Los Angeles is is new love interests. The extravaganza takes on another twist when Magic Johnson emerges from  the abyss with his patented kool-aid grin of his handing him a purple and gold No. 23 jersey. This, of course, means all 82 Lakers games are placed on national TV (not really, but the league would've tried).

It's a move that seems impossible in 2012, but could've transpired in 2010 had the Lakers granted the face of the franchise's wishes in 2007 (minus the whole Magic, abyss, jersey thing; maybe). But we'll never know because Kobe Bryant to the Chicago Bulls never happened. Crazy, right?

P.S. - I guess the real question in all this is this. Does Kobe win any rings if he's in Chi-City? Or is he still stuck on three? And if he's still stuck on three, how much differently is he viewed now? And if he does lead Chicago to a championship(s), what is the view on Kobe in 2012? My head officially hurts.