This year has been a dramatic one for college basketball, and the emotions have all been very real — the elation attached to a No. 1 ranking, the stabbing, dagger-like pain brought on by a buzzer-beater, the duality of a major blowout and the responsibility that comes with being the last two teams left standing.

A Villanova-North Carolina national championship game isn’t what the college basketball landscape necessarily wanted, but after the disappointing, tragic losses by schools favored to win it all, a hard-fought game between two basketball-minded teams is exactly what is needed. This game just features two rosters loaded with solid ballers, evenly distributed scoring and no discernible reliance on a star player — a game where teamwork actually does make the dream work.

Now fans are rewarded with all of the aspects of the game that make college basketball so great: lights-out shooting, stingy defense, ball control and all-around selfless play.

Here’s what each team brings to the table tonight.

Villanova is the antithesis of everything big-time college basketball, and our society at large, has become. There is no instant gratification from this program, no one-and-done players and no singular superstar leading the way. Looking at the Villanova Wildcats, you won’t find any “look at me!” actions or personalities, nor will you find anyone working outside of the agenda of furthering the goals of the team.

The Villanova roster is bereft of a surefire NBA prospect. The Wildcats truly beat people as a team. In its five tournament games, Villanova has had thre different leading scorers. In Saturday’s national semifinal thumping of Oklahoma, six Wildcats scored in double figures. This team runs its offense meticulously, working through its sets and passing the ball until the open shot is found.

At any given time, there are three to four players on the court who are legitimate threats from the perimeter, who can also put the ball on the floor and get to the rim. When center Daniel Ochefu is on the court, he adds yet another dynamic to the offense. It is futile to try to stop Villanova by singling out a player to shut down, but an even greater strength is that you can’t try to stop the Cats by simply attacking a single facet of their offense either. Try to take away the jump shot, they will blow by you. Sag and give them jumpers, they will shoot the lights out. Jump shots not falling? They will work their offense through the post.

As daunting as the Wildcats have been offensively, they have been equally as impressive on the defensive end. Against Kansas in the regional final, they held Perry Ellis to just four points. Then in the national semifinal, they held the talk of the tournament Buddy Hield to nine points after he had averaged 29.3 during the tournament.

Individually, the players have done a great job at on-the-ball defense, getting right up in the shirt of the ball handler. But they have also played nearly flawless team defense, shading, doubling and rotating with precision. The defensive pressure has wreaked havoc on opposing offenses, as Kansas turned the ball over 16 times while Oklahoma coughed it up 17 times. Even when the offense manages to keep the ball, every possession has been a battle.

Villanova enters Monday night playing its best basketball of the season. The Wildcats are playing a brand of basketball that is an absolute pleasure to watch: the perfect blend of execution, teamwork, cohesion, toughness and hustle. Thus far in the tournament, they have basically put on a clinic, and it should be fascinating to watch them play their game against a team like North Carolina.

Speaking of the Tar Heels…

This season saw similar success for the Tar Heels, albeit without much of the flash and fanfare that usually accompanies such a storied program. It was more like a slow and steady burn that culminated in the tournament tear the Heels are currently on. Granted, they were the preseason favorite and are now the 24th team to start the season ranked No. 1 in the Associated Press poll and end the season playing for the national championship. But they had their fair share of struggles in between: an early loss to Texas and a string of losses to strong schools like Louisville, Notre Dame, Duke and Virginia toward the end.

Yet, here they are, 33-6 with ACC regular-season and tournament titles under their belt, competing for a sixth NCAA championship. How did they get here?

Much like the Wildcats they will face Monday night, the Tar Heels subscribe to team basketball. In the NCAA Tournament alone, three players — Marcus Paige, Justin Jackson and Brice Johnson — are averaging double-digit points per game (13.8, 13.6, 20.0). Defensively, UNC has allowed only two opponents to shoot 50 percent or better from the floor this season (Maryland at .508 on Dec. 1 and Notre Dame at .551 in the East Regional Final), and the Tar Heels boast an assist-to-turnover ratio (1.66) that ranks third in the nation and is the best of any UNC team since turnovers were first recorded in 1981-82.

Two squads with similar styles of throwback, team-oriented basketball is what’s on the menu Monday night — the culmination of a season without a traditional front-runner, a season where having a stud player in the spotlight didn’t guarantee you an actual spot on the final stage.

Regardless of the outcome, we will all be better, more self-possessed basketball fans for watching a national championship game like this. 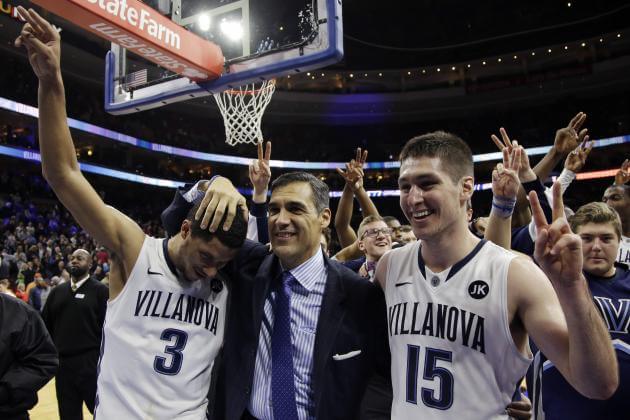