Just a few years ago, Thon Maker was regarded as one of the best high school recruits in the land. As time moved forward, the legend of the Maker has dwindled since he captured the hearts of basketball enthusiasts with his unforgettable YouTube video.

Now that he is 19 years of age, he is trying to make the preps-to-pros leap that guys such as LeBron James and Kobe Bryant made over a decade ago, although Maker’s situation differs quite a bit from the King or the Black Mamba. Technically, he graduated from high school in 2015, and he spent this year in prep school at Athlete Institute in Ontario, Canada. Being 19 and spending a year out of high school, according to the NBA rules, would make him eligible for the 2016 NBA Draft.

Of course, the NBA will have to further investigate if Maker is, in fact, eligible, but if he isn’t, perhaps it may be to his benefit. Oftentimes, teenagers make bad decisions, and Maker may be on course for a typical teenage blunder. If the NBA doesn’t allow Maker to become draft-eligible, he can take his talents to a college campus near you.

Let’s take a look at why he should make the jump toward college instead of the NBA.

Thon Maker should go into the 1990s basketball film archives and watch Blue Chips and He Got Game. Maker could get the same treatment as Jesus Shuttlesworth, Ricky Roe, Butch McCrae and Neon Boudeaux received when they were being courted during their on-campus visits. 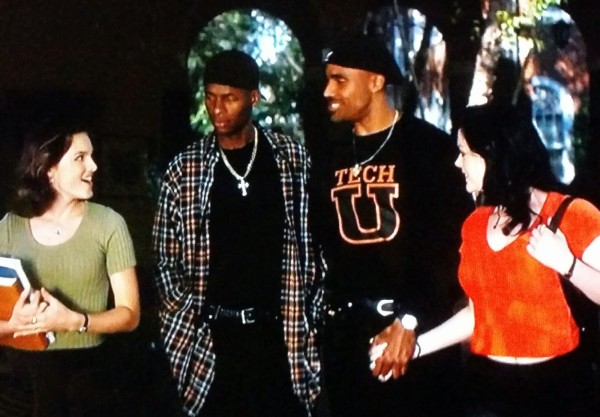 The scenes from the movies can alter his thinking on deciding if he wants to make the big jump to the NBA. The glitz and glamor of the NBA are spectacular, but being the main attraction on campus can be just as enchanting. It’s not a guarantee that the multitalented seven-footer will make his mark in the NBA right away, so his first few years can be filled with ambiguity. Gracing his presence on a college campus, students, alumni and die-hard fans will adore Maker due to the fact that he decided to go to their college — and of course because he's a pretty good basketball player.

Learning From The Best

Former highly touted prospects such as Kyrie Irving, Andrew Wiggins, John Wall, Anthony Davis and DeMarcus Cousins were fortunate enough to play under first-rate head coaches during their short stays in college. Though the time spent on campus was short, the valuable lessons learned from the coaches helped all of the aforementioned players transition well to the NBA.

More often than not, talent isn’t the issue with players obtaining success at the next level — it’s the will and hard work that some players lack. Playing under coaches like Coach K and John Calipari, you sacrifice numbers for winning, and while it may not seem as if that means much, it can go a long way in the NBA. Receiving the tutelage from the great college coaches can take one’s game to the next level by learning some of the intangibles that can make a good player turn into a great one.

His Draft Stock Can Improve

In some cases, players such as Ben Simmons and Michael Beasley were so good in college, it didn’t matter how their teams fared during the college basketball season. They could have suited up for ITT Tech, and it was a sure thing that they would be selected very high in the NBA Draft.

As we’ve witnessed over the years, a lot of future NBA players do not have that luxury. In recent years, the likes of Buddy Hield, Denzel Valentine, D’Angelo Russell, Karl-Anthony Towns, Kris Dunn, Brandon Ingram and a host of others have improved their stock during their brief time in the NCAA. Players like Hield and Valentine, who remained around campus longer than the average college basketball star these days, are sky-rocketing up the draft boards due to their showings during their senior seasons. For KAT and Russell, their lone seasons at Kentucky and Ohio State, respectively, kicked up their profiles higher than they were before they scored their first collegiate points.

It may sound cliché, but getting a free education is always overlooked. As I make my student loan payments to Sallie Mae every month, I cringe at the thought I didn’t have a chance to go to school for free. Whether if it is for one year or four years, Maker can improve his game, stock and live the college life all for free. While there is no cost to attend college for the highly touted prospect, he can put himself into position to make millions of dollars by showing NBA scouts that he is more than a YouTube sensation.

He’s Not Ready For The NBA

Playing in the NBA, life comes at you fast. Thon has a diverse skill set for a prep star, but at this stage of his career he is nothing more than a project. With the ability to shoot the ball from all areas of the floor as well as having the ability to rebound at a high level, Maker fits the mold of the the big men in the new version of the NBA, but his shortcomings are pertinent as well.

Maker will have to put bulk on his frail frame, and he also must improve on asserting himself on the offensive end. There are too many times when he drifts in and out of games due to trying to channel his inner guard game instead of using his size as an advantage. His length and athleticism can be advantageous on the defensive side of the ball, but that has yet to be seen on a consistent basis.

The NBA is filled with big guys who have the ability to guard multiple positions. It would be ideal for him to fill that role for a team, but he hasn't displayed the focus to dominate on that end as a player his size should. Despite the shortcomings and loads of potential, a team will draft Maker in the first round based off the riddle of how good he can be. But as we’ve witnessed, potential has placed a lot of coaches, scouts and general managers on the unemployment line.

Many think Maker can become a combination of Kevin Garnett and Kevin Durant, but let's be honest — that’s not going to happen. At age 19, Durant was already a profound scorer at the NBA level, and Garnett was the best high school prospect entering the 1995 NBA Draft. Despite the hype and talent teeming from him, Maker is far from being as polished as either Durant or Garnett. His numbers have looked good on paper while in high school, but Maker has dwindled under the bright lights against top-tier completion. In last year’s Nike Hoops Summit, Maker suited up for Team World against Team USA and had just two points in a limited role on a team that featured Jamal Murray and Ben Simmons (who both greatly outplayed Maker).

Although his size and versatility will suit him well in the league at some point, he is a few years away from being worthwhile in the NBA. With no true position, no standout attributes and a skinny frame to boot, Thon Maker will have a hard time to find his niche as a pro next season … which is why he should strongly considering heading to college, regardless of what the NBA decides on his draft eligibility.