It’s a moment forever etched in the minds of those who saw it.

Just outside the three-point arc, Michael Jordan scoops up the loose ball and promptly heads towards the hoop.

The Bulls and Knicks players who dove for the ball pick themselves up and, well, just kind of watch.

Determined to score, the game’s dominant player gets to the rim. It takes him just two dribbles before he can take flight.

Up he goes, with Xavier McDaniel attempting to thwart his chance. Patrick Ewing throws his arm at Jordan, looking to derail the great 23. They foul him hard. They wanted to take him down, but they didn’t pack enough punch. He elevates and drops the ball in the hoop.

As the whistle blows for a foul, Ewing and McDaniel collapse like dominos on the floor on the baseline. Jordan looks at them. Struts towards them. Yells at them.

With every vein in his face and neck popping out, he woofs in their face. They tried to stop him and they failed. It’s his game, his bucket. No one gets in the way of Michael Jordan.

The woofing is loud and deep. It’s vile, it’s mean, and it’s hateful. It’s the unadulterated hate that boiled between Chicago and New York. The intensity, passion, and pure disdain from grudge match after grudge match was coming out of Jordan.

He throws his fist in the air towards them. Take that, Ewing. You still aren’t stopping me like you couldn’t in the 1982 NCAA championship game.

Take that McDaniel, you punk who thinks he can bully the Bulls out of the playoffs.

Take that. You tried, you failed.

The play itself was fantastic, but the image of Jordan’s face with his mouth wide open and arms flailing towards the fallen defenders makes it unforgettable. 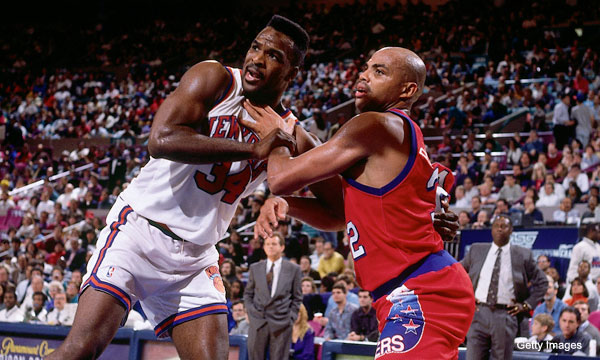 There once was a term, ‘no free buckets.’ If anyone came in the lane looking for a free layup or a fancy up-and-under, you fouled hard. You prevented your opponent from scoring, and you shook them up.

Maybe they’d miss one of the subsequent free throws because they were woozy. Maybe they would think twice before approaching the hoop again. Maybe they’d act strong and determined until the point of contact and turn the ball over out of fear.

Or maybe they’d rise to the occasion and score.

No matter what happened at the end of the play, the level of competition was heightened. No free buckets.

Today, Jordan would probably be issued a technical foul. Maybe double technical fouls would be called on McDaniel and Jordan. Everyone would try to diffuse the situation as best they could, with announcers pandering for further consequence or seizing the moral ground in the situation.

Broadcasters used to say something to the effect of, "Jordan scores and ferociously yells at Ewing, he’s fired up!"

Now their voices have wandered far from that. "Jordan needs to control himself here; no need to taunt an opponent that way."

What happened? When did everyone decide that healthy animosity on court or in the field of play was unhealthy?

Something changed in the sports world, and while it’s easy to blame the media and television, it seems like the attitudes of the spectators changed more than ever.

Perhaps it has something to do with the season ticket holders who come to the games from their cushy jobs at a hotshot law firm. Maybe they don’t want to see the testosterone after the whistle. It may be too real for them to appreciate.

It’s possible that the current state of bigger, faster, and stronger athletes has made everyone put their gloves back on. With the severity of injuries increasing, maybe the precautionary state that every league finds themselves in is responsible. 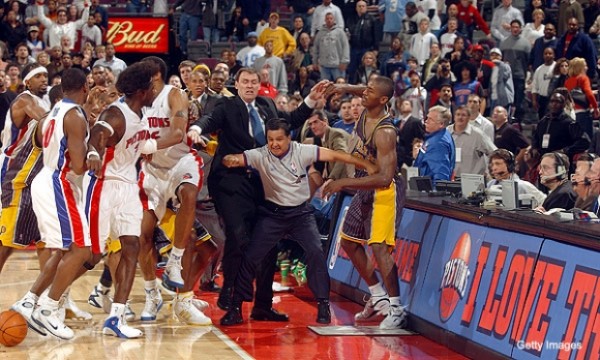 Maybe the blame rests with the ‘Malice at the Palace.’ After Ben Wallace and Ron Artest participated in a not-so-pleasant exchange, things got wild and fans got involved. With fear of the same thing happening again, the safe route of banning any type of shenanigans may have been the umbrella ruling leagues wanted.

Terrell Owens may need to shoulder some of the blame for his antics with his magic marker; showing up opponents in such an obvious way on national television wasn’t received by some. With more and more taunting springing from his act, the man needed to bottleneck the perpetrators.

The obvious reason that many will cite for the change in the attitude towards such behavior is that kids shouldn’t see it. Joey Sixpack Jr. may see his favorite player poke an opponent in the chest after owning him in competition and try it in his middle school basketball game.

In today’s age, everything that happens is caught on tape. ESPN will play the offense over and over and over again in a 24-hour news cycle. The offender will be seen, a fine will be sent out or a suspension levied. Joey Sixpack Jr. will understand how wrong the offense was and won’t try it out against his next door neighbor.

The jawing will stop. The passion will slowly disappear. Rivalries will become friendships. Nostalgia will be all that’s left to admire.

Maybe that’s the way it’s supposed to be.

If not, that’s still the way it is. Things done changed.

3 Replies to “Things Done Changed: When Did Sports Become Soft?”